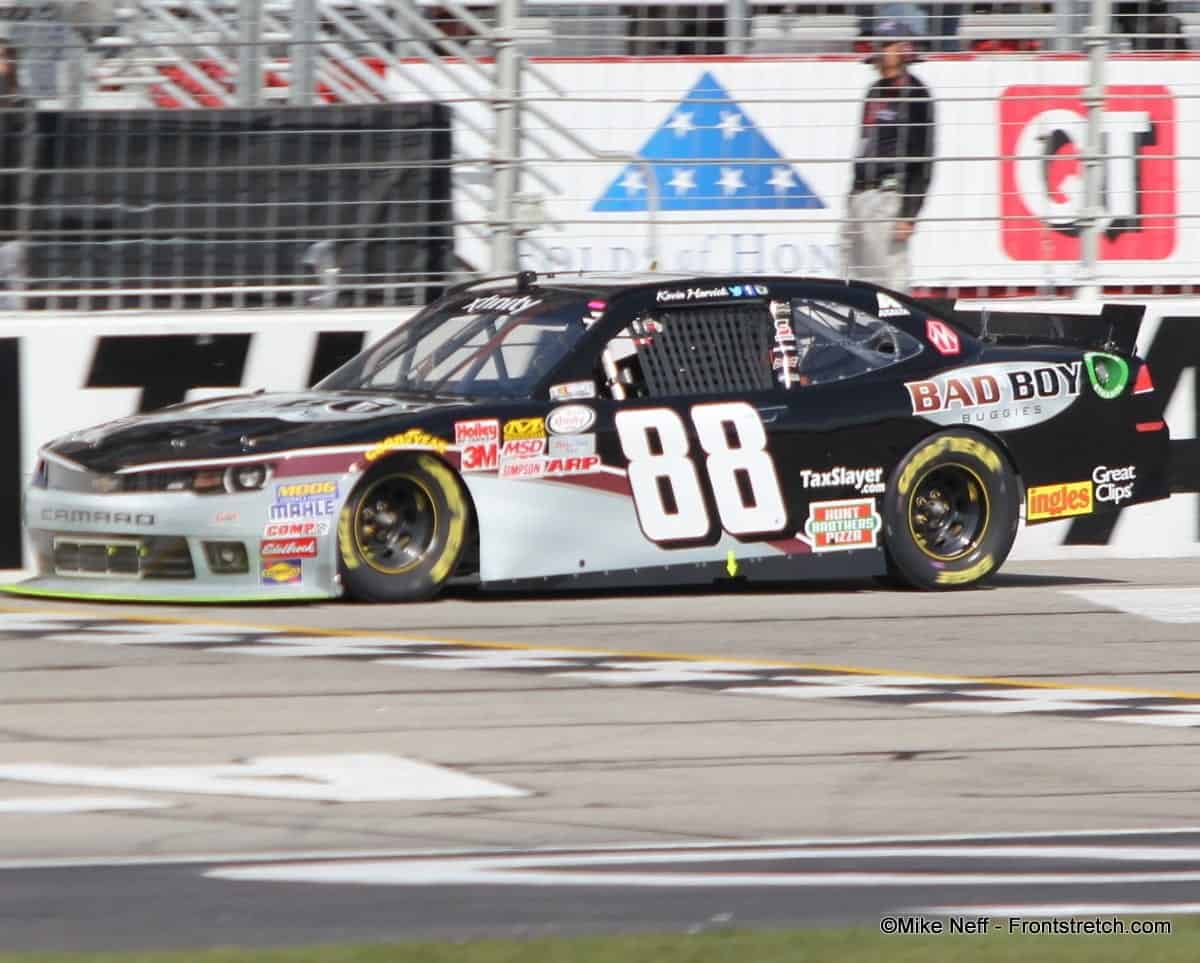 He really is happy. Happy go-lucky is probably the perfect way to put it.

Kevin Harvick entered the Drive4Clots.com 400 with four runner-up finishes in 18 starts at Auto Club Speedway. However, Saturday was the day that he won his first NASCAR Xfinity Series race at his home track.

Taking the lead for the first time on lap 38, there wasn’t much looking back for Harvick’s JR Motorsports team. The No. 88 Chevrolet led the field for 100 of the 150 laps on Saturday afternoon, which is the most he has been up front for at the 2-mile speedway. Harvick’s 46th career Xfinity Series victory marks his 12th multi-win season in 17 years. It is also JRM’s 23rd victory since its inception in 2005.

Brendan Gaughan earned his first runner-up finish since Charlotte in May of 2009. Last year, the No. 62 team won two races for Richard Childress Racing, but ended the year eighth in points. Harvick stretched out the lead by 3.3 seconds during the final 30-lap run following a caution for debris.

Reigning Xfinity Series champion Chase Elliott ended the day with a season-high fourth-place result. Working with new crew chief Ernie Cope, the pair has three top fives and four top 10s to start the year following a wreck at Daytona. Elliott was unable to get around Erik Jones late in the race for third place. Jones led four laps after starting on the pole, and seldom fell outside the top five. Brian Scott, Kyle Larson, Brad Keselowski, Regan Smith and Elliott Sadler rounded out the top 10.

The race lasted approximately two hours and four minutes, which was less than a minute faster than last year’s event. There were eight leaders with 13 lead changes during the 150-lap event, which is down from 18 swaps for the lead in 2014.

Gaughan and Shane Wilson have found the chemistry they had back in 2003, when they nearly won the Truck Series championship. Following a multi-win season in 2014, the duo has picked up the pace to start the fresh year. Earning a runner-up result at Fontana, Gaughan proved that he is going to be a true title contender this season. Unofficially, he leaves this weekend sixth in points, which is where he was at this point last year. However, three top 10s have sent momentum throughout the RCR camp, and Gaughan is set to win multiple races at this pace.

Buescher, who now sits five points behind Dillon in the standings, finished fifth on Saturday. Following back-to-back 14th-place finishes, the driver of the No. 60 car was able to run much stronger during the 300-mile race. Though he lacked speed at the start of the race, Scott Graves and he were able to adjust the car to make it a contender for the win. The former ARCA Series champion now has three top fives on the year, and making his Sprint Cup Series debut on Sunday can’t hurt him as he looks to win a title.

Denny Hamlin had a solid run going in his second start of the year for Joe Gibbs Racing in the No. 54 car. Leading 33 laps on the day, he appeared to have a chance to win his first Xfinity Series race since April of 2011 at Richmond. However, after reporting a possible engine issue, he was caught speeding entering pit road for a scheduled green-flag stop. Hamlin was issued a pass-through penalty, which put him one lap down, and finished 18th because of it.

Sam Hornish Jr. was on pace to break into the top 10 for Biagi-DenBeste Racing in the No. 98 car. However, on lap 46, his engine expired, which forced him out of the race. Finishing 37th in his second Xfinity Series start of the year, he failed to bring momentum over to his Cup Series team, which currently sits 24th in points.

Austin Dillon was running in the top 10, and nearly broke into the top five when his No. 33 Chevrolet experienced electrical issues. Entering Fontana, he had not finished worse than fourth in three races this year. But even after a strong weekend, he finished 38th for RCR.

Starr and Cale Conley had solid runs for TriStar Motorsports on Saturday. The Toyota duo finished 15th and 16th, respectively. Though it might not be outstanding, it’s a small victory for an underfunded team that has been struggling to start the season. This marks Conley’s first top-20 finish since Dover last September.

The Cup Series regulars might be winning just about every race this year, but the Xfinity Series drivers have been giving them a run for their money. Gaughan’s runner-up finish was the third by a non-Cup Series regular, which is a sign that the division is getting stronger.

Elliott has shown minor struggles early in the year. During Saturday’s spectacle, he was outside of the top 10 for a large portion, and struggling with handling as he still learns with Cope. Moreover, he is stronger than he was during his rookie season at this point, three top fives compared to just one through five races last year.

Scott continued to impress on Saturday. The No. 2 team ran up front throughout the day and finished sixth after struggling to start the year. Sadler earned his first top 10 with Roush Fenway Racing. Though the team has under performed as a whole, Sadler, however, has been just slightly behind the rest of the team. He sits eighth in points, but on the bright side – he has improved week-over-week for his new team.

“That was a pretty good day. That’s more than I expected out of this Fastenal Ford Mustang today. These guys worked really hard this weekend and made a ton of changes, so I’m really proud of them. They did a nice job. We got a penalty on pit road, but we were able to march right back through there so that was good to see. There’s no doubt we were fast today, but we just needed a little bit more track position.

“That was a wild ending. I was just really proud of these guys. They worked really hard all weekend to get this Fastenal Ford Mustang up toward the front and it was a challenge. We worked really hard for it. It was a wild race. Some of these restarts, the track is so wide that we get spread out and it’s a little hairy, but I’m really proud of these guys. They did a nice job and now it’s over and we’re looking forward to tomorrow’s race and run for the first time on Sunday.” – Chris Buescher

“The circumstances were in the seat. We’ll have to go on to Texas. The guys brought me a great racecar for sure because we were running second. Harvick was a little bit better than us, but all-around it was great performance by my guys and the whole RFR camp, so we’ll just go to Texas and have some fun.” – Darrell Wallace Jr.

“It started off as a horror story for sure. We were about a mile off. We just started off so loose, so we’ve got to go back and figure out how we started so loose. I felt at the end there we were a top-10 car. When we took our second-to-last pit stop we were only running two to three-tenths off the [No.] 88 on the long run, so we have to figure out our short run speed situation. It’s similar to what our Cup guys are saying, but we’re getting better. To battle back, we were a 20th-place car to start and we ended up finishing 11th with a top-10 car. That’s how you stay up front in points is when you have a bad day figure out how to turn it into a decent day, so we’ll just keep doing that until we can find speed in these things.” – Ryan Reed

“We still have a lot of work to do. The guys are working hard, but we need this two weeks off to kind of regroup and get some things together before we go to Texas and Bristol and all. We made some gains through the weekend and our teammates, the [No.] 60 car ran pretty good, so it was probably the best weekend we’ve had in a while as an organization. The guys are making improvements as a team and it’s starting to show on the racetrack. We’ve just got to keep digging and keep our heads down and hope we get some better finishes ahead.” – Elliott Sadler

If you love multi millionaires picking the pockets of men just trying to eke out a living…..If you hate competition among relative equals…….If you love a tame sporting press…..and if you love a sanctioning body that could not care less about its (ever dwindling) fan base, then have I got a product for you. Thanks NASCAR! Someone should remind the Cup idiots ruining the lesser series that nobody cares how many Home Runs Hammering Hank hit in the minors.