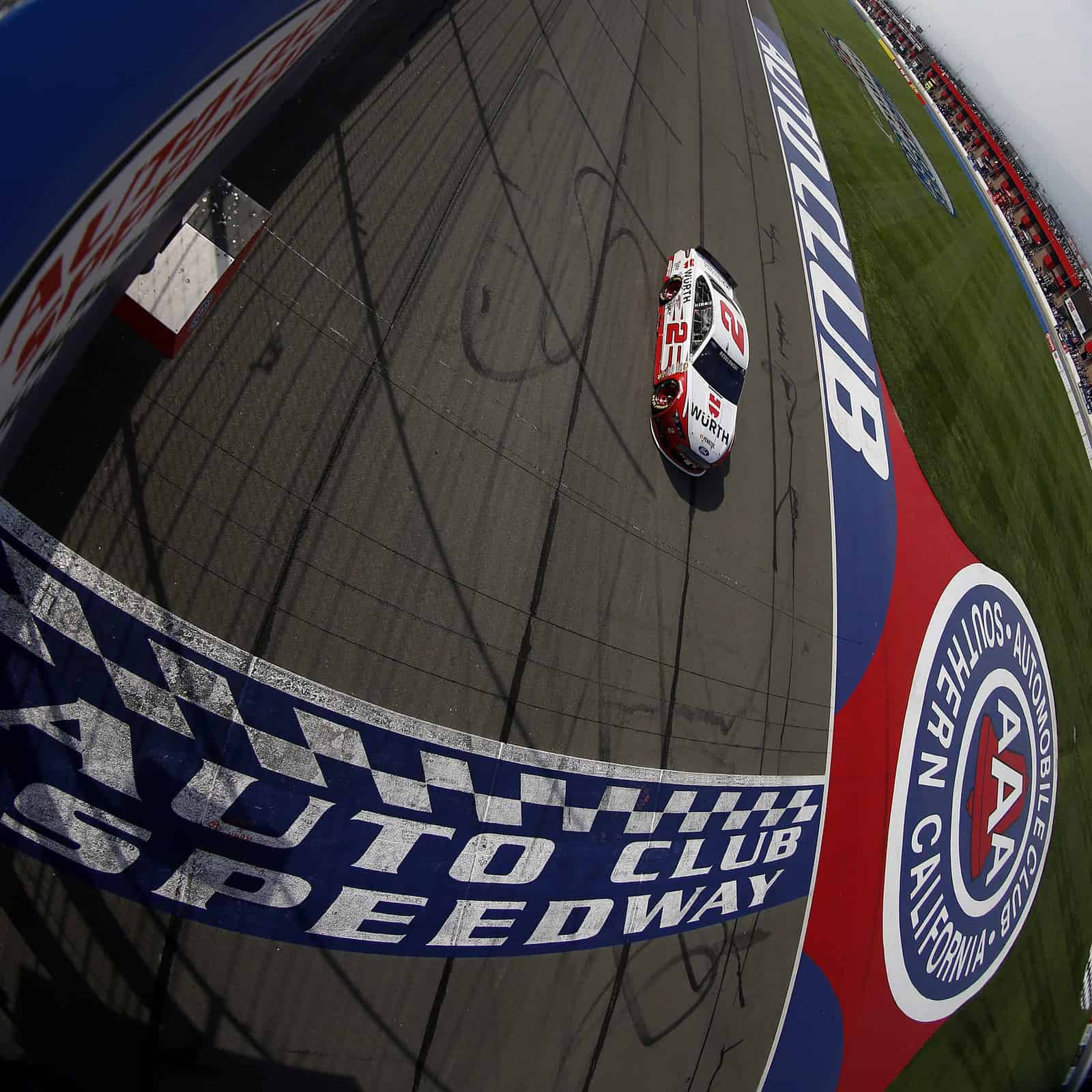 When the smoke finally settled on the hot surface of Auto Club Speedway, Brad Keselowski was the man standing in Victory Lane for the first time in 2015 and the 17th time in his Sprint Cup Series career.

Winning the Auto Club 400 in front of a sold-out crowd, Keselowski punches his ticket to the Chase for the Sprint Cup championship.

“I’m really proud of everyone on the Wurth Ford team,” Keselowski told FOX. “That’s two [wins for Ford] in the first five races. Both Penske cars in the Chase. Honestly when I was crossing the finish line I was thinking, ‘I just won at one of Roger’s tracks. Roger (Penske, owner) built the speedway and that’s really cool.”

Coming to the white flag, Kurt Busch’s dominatingly fast No. 41 led Keselowski and teammate Kevin Harvick when a burst of smoke appeared in the rear of the field. Greg Biffle was turned into the outside wall and spun to a stop just past the start/finish line.

The caution was not waved as Biffle’s banged-up Ford was able to drive away from the accident scene. Keselowski said he was unaware of the single-car accident.

“I had no idea. I was just looking in front of me,” Keselowski said. “I knew the [No.] 4 and the [No.] 41 (cars) were the class of the weekend. Those cars, on speed, definitely deserved to win. I think we kind of stole one today.”

Harvick became the first driver in Sprint Cup history to start a season with five consecutive top-two finishes as he flew by Busch to steal the runner-up spot.

“What a race,” Harvick told FOX. “Just really happy for the fans and everybody who was here at the racetrack and watching on TV to see a race like that. You just never know how the strategy is going to work out and that you’re kind of on both sides of the fence there as to what you should or shouldn’t do.”

The man who lead each practice session, had the fastest lap in qualifying and led a race-high 65 laps, Busch, was denied victory as Keselowski passed him on the final lap. In just his second race back, he already has two top fives and is inside the top 30 in points.

“We had a great Haas Automation Chevy all day,” Busch told FOX after a disappointing but promising result. “We just got hung out on the yellows at the end. On that last restart I just didn’t get the job done. Brad out-muscled us with four tires.”

For Newman, it was a third consecutive top-five finish following a pair of thirds at Las Vegas Motor Speedway and Phoenix International Raceway.

“We caught a break there with the caution,” Newman told FOX. “Just a good day for us to rebound. When your best running position is the last lap, I guess you can’t be too upset.”

The first caution of the day waved when Gordon made slight contact with David Ragan’s No. 18 Toyota. A spin followed before everyone made their first trip to pit road.

The Toyotas took no time to drive to the front and get the lead. Denny Hamlin had the race lead for 56 laps while Joe Gibbs Racing teammate Matt Kenseth led 43 laps.

Despite the speed, Hamlin had a pit road penalty late while Kenseth got a bad break from a late caution, which led to a broken axle exiting his pit stall. They finished 28th and 31st, respectively.

NASCAR fans were treated with a fantastic fight for the lead all day between Stewart-Haas Racing teammates Busch and Harvick. Starting first and second, they showed the California crowd what racing is all about.

On lap 99, Sam Hornish Jr. created the first on-track accident of the afternoon when he crashed with Trevor Bayne off turn 2.

The series is back in action this week at Martinsville Speedway.

If Gordon made contact with Ragan they never showed it. The only clip they showed was Gordon taking air off the back spoiler of Ragan’s car but in that clip they never actually touched.

This race highlights a growing debate about race length. If only a few( , in this case one, laps are remembered, and they are enough to transform a race from a snoozer to exciting whats the point in having several hours of riding in circles?
Just a question, but in this case it has some validity.

A close finish does not make a race exciting. Especially when that close finish was the result of a manipulative late caution – GWC.
Of course it was a close finish. How could it not be? Just like every championship will come down to the last race now because the rule fix it to be that way.

A great question. I watched the entire race start to finish. I felt like an idiot because I KNEW that nascar is unable to let a race play out without the attempt to manipulate the outcome. The funny thing is that the waiting for late lap meddling lessens rather than heightens the experience. I keep trying to quit. NASCAR keeps trying to help me do it. Ahhhhhhhhh!

Brad stole one for sure; he had about a 5th to 9th place car all day. Sometimes winning means being there at the end, making the right calls, and then catching the right breaks.

Another top-10 for Truex. Nice.

Congrats to Danica on her second top 20 of the season (19th). She is improving and I predict a top 15 in the not-too-distant future.

I tuned in 45 minutes after the telecast started and they hadn’t started the “race” yet so I watched some worthwhile programs until about 30 minutes left in the time slot. There weren’t that many laps left and thought they’d have too much time to interview just Hendrick drivers. I don’t think I was the only one not surprised at the GWC ending. The second GWC was another God-send and they only had time to interview 2 Hendrick drivers. Ryan’s interviews always have the Coca Cola bottle up front which is probably to annoy Pepsi.

On the first GWC I noticed the charge that Bad Brad put on but he fell back. On the second he stayed close to Busch. His car wasn’t as good as before and Brad passed him and he lost second when he had to back off coming to the line. Brian has some explaining to do when Hendrick calls for his Monday morning chat and wonders about the cautions with a Hendrick driver leading. A Penske car winning wasn’t what Brian expected.

I noticed the promo for Martinsville had Jimmie, Jeff, Jr. and Harvick. All Hendrick drivers. Looks like an indication of what to expect during the Martinsville telecast. More of the same…

Have you been paying attention at all Don? They have used that same promo picture (JJ, Gordon, Jr. and Havrick) in every race this year.

Also, while I will never root for Kurt Busch, as far as I’m concerned anyone that calls a GWC that takes a win away from the most deserving driver and randomly awards it to another as a “God-send” supports the WWE mentality that NASCAR caters to. I hope you see it that way when it works against one of your preferred drivers one of these weeks and awards it to a driver you don’t like. If you don’t then you are a hypocrite.

I don’t like it either but it’s a hell of a lot easier to swallow when it benefits your favorite driver. But I agree… that doesn’t make it right.

When I wrote ‘”god-send” I was being facetious. You should know what I think of miraculously-timed cautions and who they benefit.

LOL…sorry Don. I missed the sarcasm in that statement. Agreed!