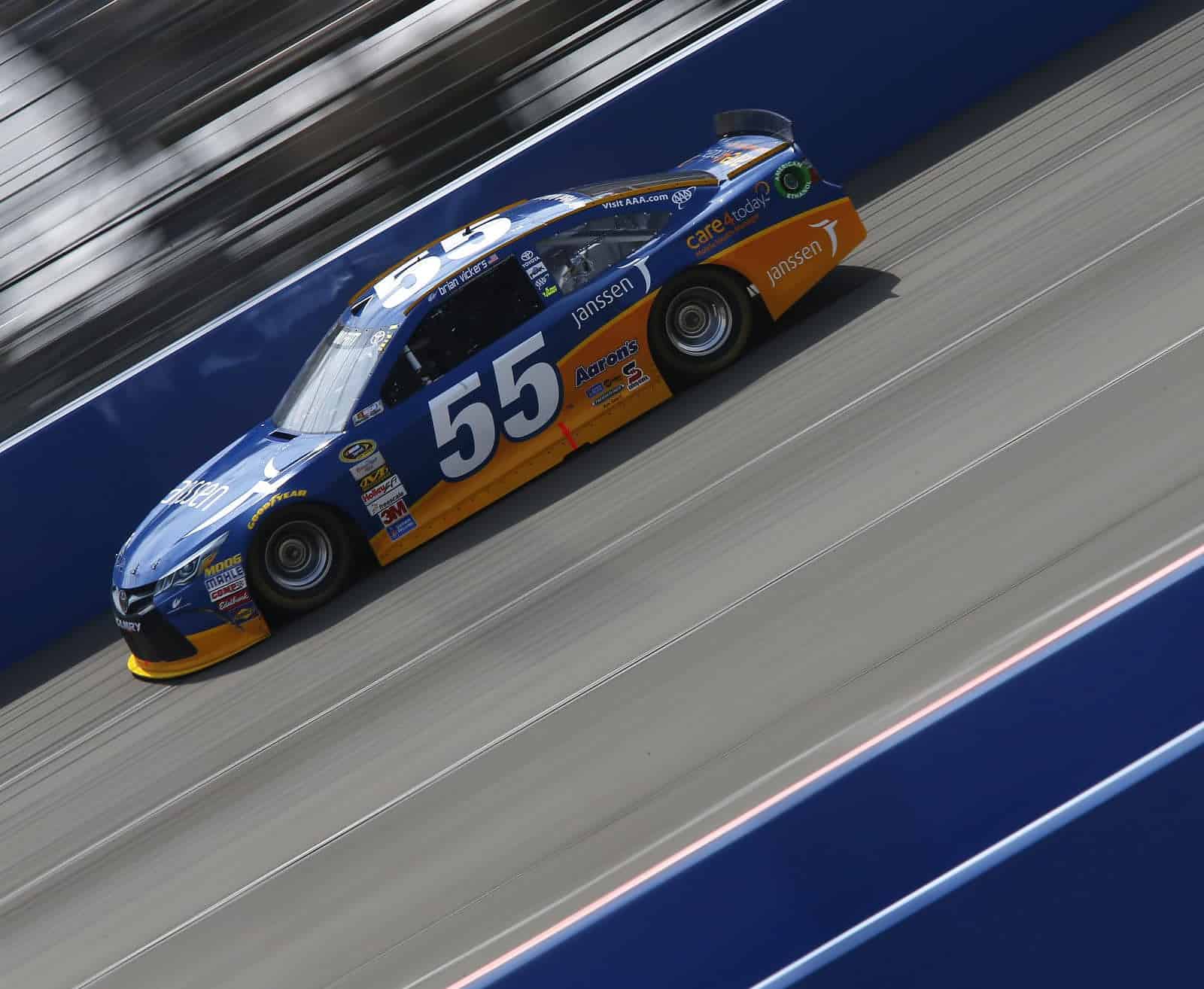 It’s been the talk of the town since Brad Keselowski miraculously won at Fontana. He still doesn’t know how he did it. Leading a mere lap en route to victory for the second time in his career, Keselowski showed that he’s truly stout behind the wheel.

However, multiple debris cautions late in the race substantially changed the outcome of what was set to be Kurt Busch‘s first victory since he won at Martinsville early last year. Though the debris was shown momentarily (approximately less than half a minute) on FOX’s broadcast, NASCAR opted to throw the caution flag just before the white flag was waved. When examining the piece, it did look like it was significant in size, but it was blown over by the cars rather quickly, and evidently altered the race, which has been an infamous pattern throughout NASCAR’s recent history. NASCAR has shown consistency over the years with debris cautions. However, after throwing it for a backstretch wreck during the final lap of the Daytona 500 and eventually throwing the caution for a small piece of metal instead of Greg Biffle wrecking on the frontstretch on the last lap at Fontana, consistency is a must. I’m sure NASCAR will take a look at it in the coming days.

Unfortunately, one of the nicest drivers in NASCAR had yet another health setback. This one is pretty major: Brian Vickers is going to be out for at least three months while on Xarelto (a blood thinner). He can’t race while taking the medication because of the risk of bleeding during an accident, and blood thinners make it difficult to stop bleeding. After having surgery for a hole between his left and right atria during the offseason, Vickers returned to racing and was seemingly healthy. However, this health scare is not just “another setback” for him. He wants to continue racing and has the support of his team and sponsor, but with a chronic health condition that shows no signs of going away, Vickers might be forced out of the car. In 318 Cup Series starts, he has three wins, 29 top fives and 77 top 10s. Originally, Vickers was going to be an amazing comeback story for a driver that can contend for a spot in the Chase. Now, it has turned into a health scare that has many worried if he can even race, let alone contend for a title with one of the few full-time sponsors in the sport.

Chase Elliott’s Time in the Sun

Later this week, Chase Elliott will be making his much anticipated Cup Series debut. The man set to replace four-time champion Jeff Gordon will run the No. 25 car for Hendrick Motorsports at Martinsville, and he enters with high expectations. Owning an 8.3 average finish in 38 Xfinity Series starts, the reigning champion has the right amount of experience heading into his first start in NASCAR’s premier division. Hendrick Motorsports has let him test Cup Series cars for quite some time, and he’s been able to keep up with Gordon and Jimmie Johnson while testing. In two Truck Series starts at Martinsville in 2013, he finished sixth and 20th, respectively. But what’s important about this weekend’s feat is Elliott kicks off a new era of NASCAR. With an abundance of young drivers roaring through the ranks, Elliott is going to be the leader of this new generation. Keselowski can be considered a leader for his generation, along with Joey Logano, but Elliott has the family genes, entering the sport at a time where Hendrick Motorsports could use a fresh face to bring in new sponsors.

Don’t be shocked to hear the name Chris Buescher more frequently. It’s rare to see a driver with Front Row Motorsports running inside the top 20. However, Buescher did just that while replacing Brett Moffitt in the No. 34 car after receiving a call at 4 a.m. on Friday morning. The 2012 ARCA Series champion did a fantastic job for the underfunded team, and in doing so earned a spot with them at Martinsville. Leaving Fontana, he is second in the Xfinity Series standings, owning three top fives and an average finish of 7.8. The cousin of former Truck Series champion James Buescher is incredibly talented and is starting to bring in marketing partners for Roush Fenway Racing. If he continues to impress, the team is going to be forced to put him in a Cup Series ride. He is dedicated to Ford, and likely wouldn’t leave for another organization. However, RFR’s horrific results at the Cup level might make him head over to another team if it can’t fix its multiple issues. Buescher is going to be a driver similar to Carl Edwards – if not stronger than the 23-time Cup Series winner. Should Roush Fenway plays its cards right, it could have the next great driver in its stable starting next year.

Time to Chase the Clock

It’s time for the paper clip and every driver in the Truck and Cup Series is aiming to win a grandfather clock. Kevin Harvick is looking to continue his astonishing streak of eight straight top-two finishes, and Martinsville has been hit or miss for him. He’s led 364 laps at the .526-mile track, but has three finishes of 13th or worse since 2012. The reigning champion’s hot start could come to an end on Sunday, but he has been astonishing enough to the point where anything can happen. Busch is searching for his first victory in a year, and his third-place result at Fontana after dominating the race has given him the fire that he lacked for the majority of last season.

Entering Martinsville, four drivers are locked into the Chase, including both Team Penske cars. Expect to see a fresh face in Victory Lane at one of the toughest tracks in the sport, especially with it being the first true short-track race with the new rules package. Aric Almirola and Paul Menard have slithered into the top 10 in points early into the season, and both finished inside the top 10 during this race last year if you’re looking for a few darkhorses.

That is really sad about Brian Vickers. Class act. Your last sentence about subject one made me laugh and its why I’m writing. NASCAR will not look into it. They will continue to shoot themselves in the foot. There was no way that Kurt Busch was going to win that race. Oh he’ll win one this year somehow but you can bet the folks upstairs will make it as difficult as possible. The only thing NASCAR looks into today is their wallet to count their money.

Don’t care for Kurt Busch ..But Fix Fix Fix..However I believe the plan was to bunch up the field & give us all an EXCITING natural finish & oh yeah it might be a little better if he doesn’t win this week … Disgusted

NASCRAP AS USUAL. NO MORE FOR ME, THE WEATHER IS NICE AND I CAN FIND ALL KINDS OF ENJOYABLE THINGS TO DO. HAD ENOUGH. AND I’M NOT THE ONLY ONE IN TEXAS.