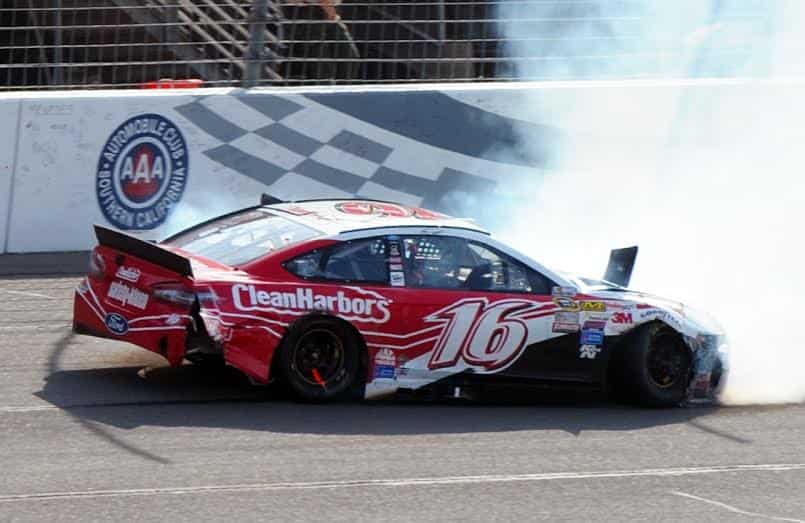 Was there a piece of debris on the track that warranted NASCAR throwing a caution late in the race at Auto Club Speedway and, if so, who got screwed out of a win? Some fans might say NASCAR screwed Kurt Busch this week by throwing a caution and costing him the win – a win that would guarantee him a spot in the Chase for the Championship. That might be the case.

Perhaps, NASCAR didn’t throw a caution to cost Busch a shot at the win. Could that be the case? Both are possible but which caution, or lack of a caution, would you refer to?

The first debris caution was on lap 186, where no debris was ever found. The second and third debris cautions were on lap 200 and lap 204, respectively.

Leading up to the lap 186 caution, NASCAR officials were repeatedly told over their radios to look for debris on the track. Multiple track workers reported back that everything was “clear.” Then, someone chimed in that David Hoots, NASCAR Sprint Cup Series Race Director, was looking for debris. As fate would have it, it wasn’t long before the caution came out for debris.

At the time, Matt Kenseth was leading but Busch and Kevin Harvick were dominant all day, and it was almost inevitable they would run Kenseth down. Busch led 65 laps and Harvick led 34 laps. At one point during, the two had a five-second lead over third place, but they began conserving fuel.

Even Kenseth said he couldn’t hang with Busch or Harvick on the track but that his crew gave him a fighting chance on pit road.

“I think the [No.] 4 (Kevin Harvick) and the [No.] 41 (Kurt Busch) were the class of the field,” Kenseth said. “I thought we had a top-five car all day and then I just had the best pit crew and they kept getting me out with the lead and giving me a shot, so it’s disappointing.”

So, what did he think about the caution coming out while he was leading?

“I’m just disappointed we’re leading and we know them guys are a couple laps short and we got ourselves in position really nicely and there’s a debris caution and you can’t find debris anywhere, of course, the leader always thinks that I guess.”

Kenseth broke an axle trying to get off of pit road and turned a good run bad. He wound up in 31st after his team made repairs. So, instead of having a chance to get a decent finish, the debris caution cost him dearly. That left the No. 41 out front and charging hard for the win.

Busch was seconds away from taking the win when another debris caution was called. Again, it was called for debris but where was it? Busch and the rest of the leaders, except Tony Stewart and Jeff Gordon, came to pit road. Then, on the restart, Busch rockets up the middle to the lead only to have a third caution flag fly.

The final caution was for a bumper cover on the No. 42 car of Kyle Larson. Contact between cars from the first caution undoubtedly was the culprit here, but it came out while Busch was in the lead. Yes, there was a bumper cover on the back stretch and Larson’s car came down pit road sans bumper cover, so there’s no questioning the legitimacy of this caution.

Busch again took the lead on the restart but Brad Keselowski, who took four tires to Busch’s two, was closing fast and making up ground. He passed Harvick and was running down Busch. And as the two crossed the start/finish line on the white-flag lap, Greg Biffle spun in the middle of the pack on the frontstretch. Most everyone thought the caution would fly because cars were going high and low to avoid contact with the No. 16 Ford Fusion but NASCAR held off. With damage to the front and rear of his car, Biffle somehow managed to get going in the right direction and the rest is history.

If NASCAR wanted to bring scrutiny upon itself from its core fans for chicanery, the final 20 laps, or so, of the Auto Club 400 definitely gave people a reason to question its motivation. Truthfully, I can’t tell you whether there was debris or not. NASCAR said there was and it brought out Sprint Cup Director of Racing, Richard Buck, to explain the situation.

“We got multiple reports over the radio and confirmed there was a piece of material, something, in the racing groove,” Buck said. “So we went ahead and called the caution. By the time we called the caution, somebody hit it. I don’t have it back yet, I don’t have the piece back yet. But we always ask the safety and cleanup crews to return that stuff.”

So, why didn’t NASCAR throw a caution when Biffle was spinning out of control on the frontstretch when Busch was leading the field? Buck said the sanctioning body wanted to let things play out on the track.

“We always make our best effort,” he said. “I mean, safety is number one. We always make our best effort to let it race back. We had well over a mile. The leaders were coming off of [turn] 2. We have multiple people in the tower watching multiple things. We’re all communicating very quickly and at a high level. We could see the cars coming off of [turn] 2. We were watching the frontstretch. Biffle got it started back up, got it turned around and headed off. We have two folks in the flag stand that were right there on top of it, so we had a bird’s eye view from their perspective that there was no debris there and we could let it come back and come back to a natural finish.”

OK, it’s that simple. Read into it whatever you like but at the end of the day, NASCAR played it safe – perhaps in more ways than one.

Don’t forget the cautions breed cautions mantra. In some cases NASCAR will throw a fake caution because the cars are all strung out, no one is passing and too many stars are getting ready to get lapped. If that fake caution then breeds 3 more legitimate cautions, then couldn’t you say all the cautions were the result of NASCAR’s meddling and manipulating the race.
In many cases that is exactly what happens and as far as I am concerned, that’s what happened yesterday.

Exactly, anything that happens after the bogus caution loses all legitimacy, so saying the race was a great ending doesn’t work. If it would have stayed green to the end, it would have been another stinker. A West Coast Stinker Tri-fecta if you will.

I have never commented on the “Debris Caution” common to nascar & am an old time fine, also no fan of Busch.. But what I saw on Sunday was completely obvious at this point that nascar manipulated the outcome intentionally & should be canonized for it. As of now how could they have any credibility about fixing the outcomes when this (& the LAME excuse that followed) type of action continues…Gee guyd the race is going to have a dull finish what should we do..Oh Wait theres a candy wrapper ..The dunces at home will never know the difference.
To Nascar: Fontana (with out your fixing) has MANY dull finishes & you can’t change that with the current situation…What a stunk up race …Earner (p.s. if it wasn’t Martinsville next week I wouldn’t waste my time

This has been going on for some time, I find it interesting the outrage this time, imo for all the wrong reasons. Nascar has screwed all of our favorite drivers at one point. Interesting times…

This is at least part of the reason that NASCAR has been able to so blatantly manipulate the product for decades. The racing press is always there with the possible excuse for obvious meddling with race outcomes. Maybe gutless, maybe stupid who knows either way, boo!

I guess when you write a column where some people think you’re defending the sanctioning body and others think you’re taking it to task, then you wrote a good column. Perhaps, the last person didn’t catch the last line of the article. Pissing off everyone must mean I did a good job.

The caution would have never flown if JJ, Junior or Danica were in the lead.

You can take that to the bank.

sad, we think that way but true for certain teams. I can tell you the team that is one of the teams that had to overcome many bs cautions because they were going up against the team that pays Nascar (read Brian’s) bills…we notice it and it happens, which makes the victory is actually won, we are happy, but the “other side” still will complain about it being a bs. win..Getting really sickening.

No more explication needed than the team with the bigger fan base finds a tough breaks & getting beat unpalatable! Fully know for inexplicable indignation, it is a typical & predictable ploy of the SHR contingent to drag the sport down as a whole, rather than give Ford teams the credit or dignity they earned on the track & deserve! If I & the Ford contingent have seen it once, we have seen it a thousand times. Nothing new here at all. The truth be in the contrary, in fact. Shamelessly riling up the fan base is an ages old & very played-out imbecilic psychology & pseudo-political tactic. Congrats & tyvm to SuperBrad, CC Paul Wolfe, Team Penske & Roush Yates Engines. And tyvm to Nascar!

We (yes, I can include the conversations I had with folks) have noticed since Penske became the flagship Ford and winning enough, we have never seen by many the refusal to say, Ford and driver did a great job that race and deserved to win. Some insanely nasty stuff added on for good measure. And I stress not on here, but other sites, amazingly bad. I won’t even give them credit for the stupid stuff I read and actually heard…sad stuff. In regard to Fontana Brad admitted he stole the win, but he also admitted he lost a few that way too, nothing new under the sun.