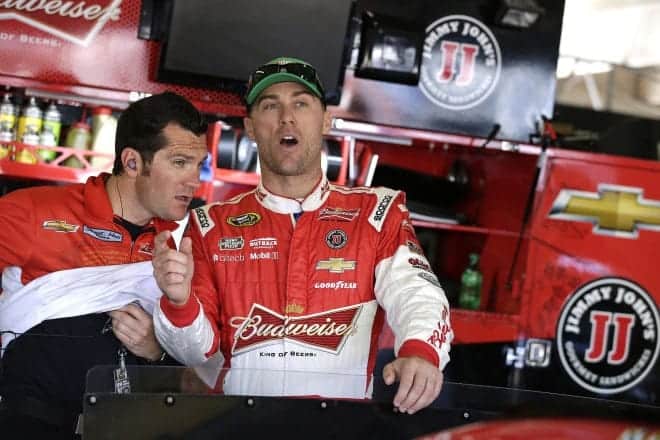 Sprint Cup Series: Keselowski’s Great Escape – Brad Keselowski up to this point has been the forgotten man in the Team Penske duo these days. With Joey Logano victorious in February’s Daytona 500, Keselowski has had a decent season by comparison but still seemed a step behind. He had zero top-five finishes entering Sunday in comparison to his teammate’s two. That, of course can leave a winless driver vulnerable during a spring and summer where anything can happen in this sport.

However, in the closing laps, a series of questionable NASCAR calls put Kes in position to pounce. It was a win that could have gone to many deserving candidates: Kevin Harvick, Kurt Busch, even Matt Kenseth before a broken axle broke his heart. But a green-white-checkered finish leaves aggressive drivers able to capitalize coming up to speed. That’s exactly what the 2012 Sprint Cup champion did, charging through traffic and darting through Auto Club’s wide turns to force his way right into the front. He only led one lap, the last one yet in the process changed his entire season around. Suddenly, all of Penske has their Chase bids secured and can spend the next 20 races catching up on their speed gap – prepping for a September showdown. Instead of an upset Busch victory, the rest of the field might wind up upset this fall because the two-car Ford lead team has gotten a step ahead of the competition once again. – Tom Bowles

Xfinity Series: Harvick Remains Unstoppable, but Young Guns (and Gaughan) are Coming – Passing was at a premium once again at Auto Club Speedway for the Xfinity Series 300-mile event. Though Harvick went to Victory Lane for the second time this year for JR Motorsports, he was under some pressure by one of his former teammates – Brendan Gaughan.

Gaughan showed that he is going to be racing with the young drivers for the title, and he isn’t going to shy away at a possible championship run for Richard Childress Racing. Finishing second, even though he was quite far behind Harvick, showed that there might be a pause in the dominance by Cup Series stars. Racing in the Cup Series for the underfunded Premium Motorsports team has given him added track time, which he believes will pay off throughout the year.

However, in the midst of an era where money is controlling the sport and the Cup Series drivers are dominating in the Xfinity Series, the young guns flexed some muscles on Saturday. Third to fifth place were each Xfinity Series development drivers for top-tier teams. Each of them made incredible gains during the race, especially Chris Buescher, who finished 20th in his Cup Series debut on Sunday. Buescher impressed yet again with another top five, and it won’t be too long until he takes over the championship lead from Ty Dillon, who has been struggling as of late. – Joseph Wolkin

Short Tracks: A “Magical” Victory – While many tracks within a 500-mile radius surrounding Boston are still buried under snow or not yet prepared for racing, South Boston Speedway in Virginia hosted their NASCAR Whelen All-American Series season opener with twin 100-lap features for the headlining late model stock car division on Saturday.

National and track champion Lee Pulliam was honored for his accomplishments with one of the grandstands being named after him, but the many-time winner was not a threat for the win when each race reach conclusion on this day.  Instead, it was another former NWAAS multi-time champion Philip Morris that grabbed the first victory. In the second race, controversy made its way into the chain of events early when NASCAR Camping World Truck Series regular Timothy Peters made contact with Morris, ending Morris’s night. Peters would go on to make his way back through the field and take the win at his home track.

Brown spent last Friday testing for the race and he might need it because he will participate in the Pro Division, which means he and the rest of the pro drivers will start 30 seconds behind the celebrity drivers in the event. All 18 participants will race in 210-horsepower Scion FR-S race-prepped cars. Some of his competition includes Alfonso Ribeiero, Robert Patrick, Mekhi Phifer, Willie Gault, Dara Torres, Mark McGrath, John Rzeznik and Rutledge Wood.

Sports Cars: Action Express Racing Claims Mobil 1 12 Hours of Sebring – Despite P2 entries dominating qualifying and practice sessions at Sebring International Raceway, it did not take long for the Daytona Prototypes to come to the front on Saturday at the very bumpy 3.7-mile road course. Olivier Pla started from pole in the No. 57 Ligier JS P2-Judd for Krohn Racing, but the team fell out of contention as soon as team owner Tracy Krohn took over behind the wheel. The other Ligier J P2 in the field, the No. 60 for Michael Shank Racing, crashed out of the race in the second hour when Oswaldo Negri Jr. ran over a curb trying to avoid the No. 17 Team Falken Tire Porsche 911 RSR of Bryan Sellers. Negri lost control on the curb and went head-on into the tires. The chassis is said to be repairable prior to the next round at Long Beach, but the No. 60 was out.

Tequila Patron ESM was very competitive with their ARX-03bs, but they both ran into mechanical issues. Normally, the team would have fixed the cars and returned to the race. However, those two cars have to be in France in a few days for the WEC open test at Paul Ricard. Hence, they didn’t want to lose time repairing issues when they need to get the equipment to Europe. As a result, as soon as something serious happened to the cars, they were retired.

Those issues left Action Express Racing’s No. 5 Chevrolet Corvette DP Evo of Jõao Barbosa, Sebastien Bourdais and Christian Fittipaldi at the front with only a slightly weakened No. 01 Ford EcoBoost-powered Riley from Chip Ganassi Racing with Felix Sabates trailing. A long stretch without a full course allowed Action Express Racing to lap the entire field, once very common in endurance racing, but incredibly rare today. The team was able to hold that one lap lead all the way to the finish, clinching overall victory for the Corvette DP.

The Prototype Challenge will be remembered for only two things from Sebring. One was BAR1 Motorsports’ unsafe release during a round of pit stops under yellow. The released put the No. 16 out directly alongside the No. 57 Krohn Racing Ligier JS P2. Directly in front of them was the Fifty-Plus Racing BMW Riley. The BAR1 Motorsports No. 16 nailed one of Fifty-Plus Racing’s crewmembers, sending him flying. Dorsey Schroeder, who was just getting out of the car, had his racing shoe run over. Luckily both men are OK.

The other is the fact that PR1/Mathiasen Motorsports were able to duplicate their class victory from the Rolex 24 (while finishing sixth overall) with the lineup of Andrew Palmer, Mike Guasch and Tom Kimber-Smith. Unlike Daytona, the trio were able to beat core Autosport’s No. 54 on merit. These two teams will likely fight for the class title all the way to Petit Le Mans in October at Road Atlanta.

In GT-Le Mans, Porshce North America was looking very good for victory with 90 minutes to go for either one of their entries. Then, their entire effort fell apart. The No. 912 Porsche 911 RSR pitted for a normal stop, but the team could not get the left-rear wheel nut off. The team ended up having to pit again, losing more than a lap in the process. Shortly after the second stop, the gearbox failed on the No. 912, ending their night.

Around the same time, the gearbox of the No. 911 Porsche 911 RSR locked up in fifth gear. Oh, the downfall of having paddle shifters on the wheel instead of a fully manual gearbox. As a result, the team of Richard Lietz, Patrick Pilet and Nick Tandy were reduced to staggering to the finish, well off the pace. The beneficiaries of Porsche North America’s mechanical issues was the No. 3 Chevrolet Corvette C7.R shared by Ryan Briscoe, Antonio Garcia and Jan Magnussen. The Corvette Racing trio inherited the lead in the final hour to win easily over the No. 62 Risi Competizione Ferrari F458 Italia.

The GT-Daytona class came down to the last couple of minutes of the race. Six cars were on the lead lap in the final hour, and the race was still in doubt in the closing laps. Then Mario Farnbacher went off at turn 10 with 12 minutes remaining, giving the lead to the No. 33 SRT Viper GT3-R driven by Jeroen Bleekemolen. Bleekemolen seemed to have the race won, but the car died with four minutes remaining. At the time, Bleekemolen claimed that the Viper’s V10 engine blew. Later, Bleekemolen revealed that he had hit a piece of debris and broken his radiator in the process.

It turned out a piece of debris hit the radiator.. Car and team were great! On to the next one! #12HSebring pic.twitter.com/vmmSaYhGSi

The late retirement gave the lead and win back to Farnbacher, Ian James and Alex Riberas in the No. 23 Alex Job Racing/Team Seattle Porsche 911 GT America. Their margin of victory was a little less than nine seconds over the No. 007 Aston Martin V12 Vantage shared by James Davison, Brandon Davis and Christina Neilsen for TRG-AMR. – Phil Allaway