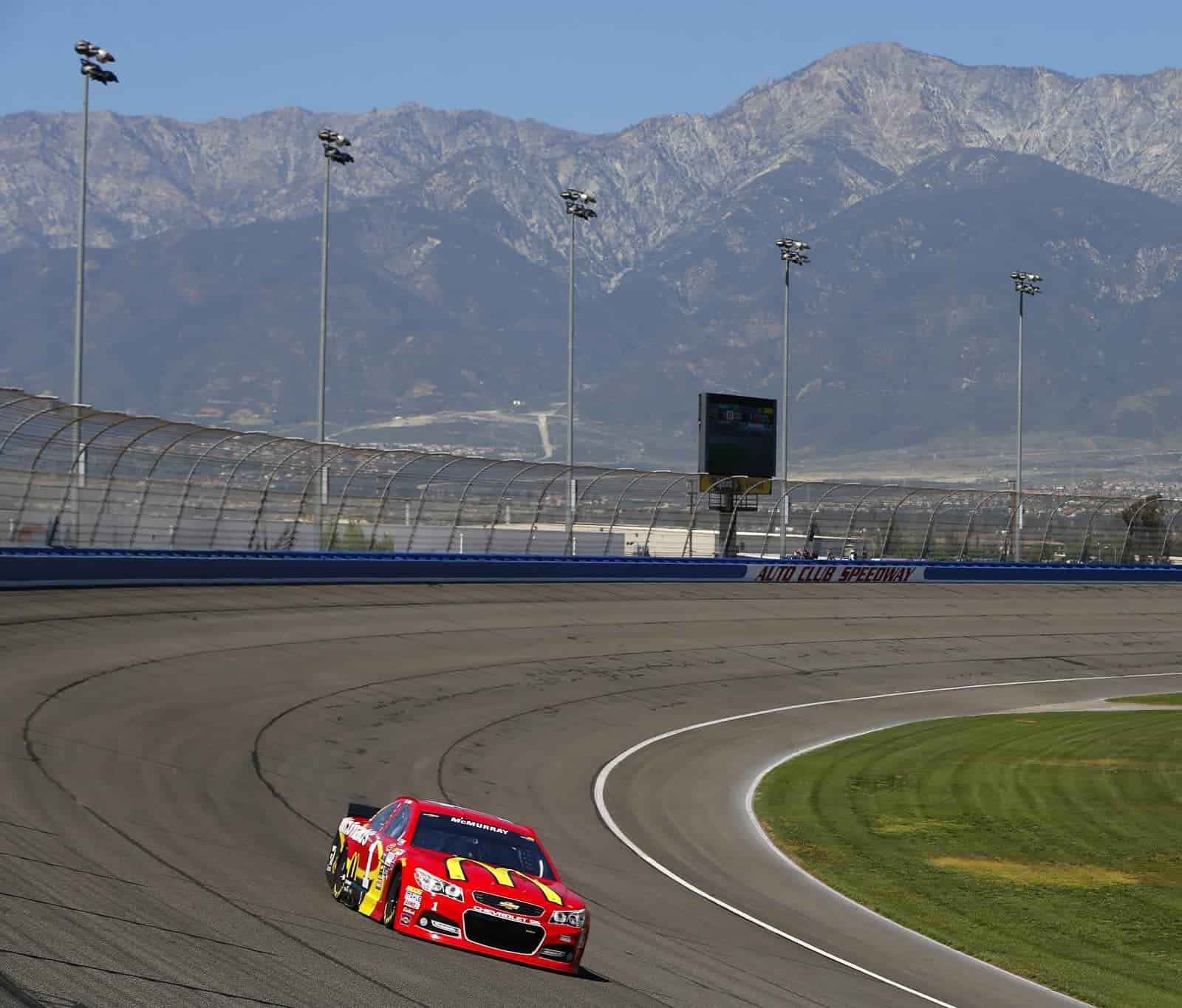 Five weeks into the 2015 NASCAR season, the racing has been… well, just OK. There’s action deep in the pack, if the broadcast cares to show it, and there have been some good battles. But for the most part, fans have expressed disappointment in the product on the track.

There’s talk surrounding the new rules for 2015, the aerodynamic dependence that makes track position too important and the inability to pass. While these are all pieces to the puzzle (and, arguably, part of the evolution of a sport where the cars are supposed to look like street cars. Those have gotten much more generic and aerodynamic over the years as well, making it that much harder to get away from the problems in the racecars.), there’s one other piece that many are leaving out even as they pine for the “good old days.”

NASCAR heads to Martinsville Speedway this weekend, the last of the tracks from its original schedule. At a smidgen over half a mile, it’s the shortest track in the sport. Lap times are slow — the track record is under 100 mph. But the racing is always — always — top notch.

Even if the leader opens up a gap, there’s so much action on the track at times that you can’t watch it all. Sometimes, it falls into place for a few laps, but you know what? That is part of the game. The idea that there has to be thrilling passes every lap to make a race good is a new concept, born of the video game generation. But at Martinsville, there is almost always something going on. Just listen in on the drivers’ radios.

Martinsville is different not because of the cars or the rules, because those are the same. It’s different because of the track itself. Martinsville, Bristol and Richmond, the three remaining short tracks on NASCAR’s schedule, are fan favorites. All under a mile in length, these tracks are special because it’s harder for the cars to fan out. During a long green-flag run, the leaders are nearly always mired in lapped traffic, racing hard for every spot. It’s the kind of racing that fans, both new and longtime, diehard and casual, associate with NASCAR.

The road courses also produce a different and exciting style of racing. A few mile tracks offer a challenge for drivers and teams, but not always the racing for which fans hope. And then there are the intermediates — those cookie-cutter mile-and-a-half to 2-mile oval-ish tracks where aerodynamic dependence becomes most apparent. The superspeedways are 50/50 for fans, love ’em or hate ’em, but it’s the intermediates that produce the racing that breeds questionable debris cautions and leaders checking out on the field.

Even taking into consideration that 1965 was before the sport’s modern era and the schedule was vastly different, it’s easy to see the sport’s migration from the short tracks to the big ones. Is it a coincidence that back in the day, whether that was 30 years ago or 50, that there was a much better balance of tracks on the schedule? Probably not.

While at times it’s debatable how much better the racing always was (one or two drivers on the lead lap at the end doesn’t generally make for a storybook ending, and that was often the case decades ago), it is clear that the tracks on the schedule are an important piece of the change that the sport has seen. Even in the ’80s, the intermediates’ place on the calendar wasn’t fully half the season as it is now, but closer to a third, with more races on the short tracks and fewer on the one-miles. Restrictor plate and road-course races have remained static, perhaps because of the specialized cars teams must build to run them.

What happened? As the sport shifted from the regional to national spotlight, it needed new venues, and the venues being built were multi-purpose stadiums designed to be able to host both stock cars and Indy cars. Much like the dual-purpose, circular astro-turfed baseball-football monstrosities of the ’60s and ’70s, tracks were built to be utilitarian, not for the intricacies of a sport. There has not been a new short track added to the schedule since Bristol became a permanent fixture in 1961. The last new 1-mile track was Loudon in 1993. In comparison, since Loudon came onto the circuit, there have been six new 1.5-2-mile tracks added to the schedule: Auto Club, Texas, Las Vegas, Kansas, Kentucky and Homestead. In that same time frame, NASCAR dropped North Wilkesboro, Rockingham and one of Darlington’s two races (while Darlington does fall into the intermediate category, its unique configuration makes it a unique challenge).

During NASCAR’s late 1990s-early 2000s boom, those tracks made some sense; they held a lot of people in addition to being raceable for multiple series. During those years, NASCAR was filling seats nearly everywhere, so it could be argued that track selection was not as critical during those years, but even that’s a stretch; perhaps some of those who flocked to the sport so they’d be in the cool group at the water cooler on Monday would have really fallen for the sport as their predecessors did.

Are the racetracks all of NASCAR’s problem? Of course not; just like the cars, the drivers, the short attention span of many fans and the rules aren’t the sole problem. But the schedule is part of the problem, and for some reason, nobody seems to be in a hurry to build more half-mile tracks.

That’s really a shame because in the long run, going back to basics with the schedule might just be what saves the sport.

You bring up Darlington and that’s a very good point… While you couldn’t duplicate it, not every intermediate track has to be a cookie-cutter of the others. A couple of 1.25 milers with some unique characteristics could add a little spice to the schedule. I’m still in favor of more short tracks, and maybe even another road course or two, but some innovation by track builders couldn’t hurt.

I don’t really want the cars to look like street cars, I want them to look and drive like race cars. At least they got rid of the stupid wing.

yes the tracks make a difference. NASCAR got so full of itself and the people building the tracks wanted “multi-purpose” style tracks so that Indy and Champ cars could race there, along with NASCAR’s stock cars. Unfortunately one size doesn’t really fit all and so we got the “boring” racing at the big wide D-shaped ovals. And yes, I consider high speed parades with 2 seconds between the cars and no passing to be boring.

Love the short tracks or the unique ones, such as Darlington & Richmond, as well as the road courses. Most of the rest of the tracks, well, go to the one closest to you because really there isn’t a lot of need to travel (unless you just want to see a different part of the country) because the racing will look much the same.

Good points all, but the problem IS the cars. Identical cars running just the same, exciting!

didn’t there used to be a racing series that ran identical cars? Oh yeah that was the IROC series, the one that doesn’t exist any more – even on a limited basis.

Tracks are a big problem. Even Richmond is getting too aero-dependent. The cars contribute in a huge way to the problem as well. Putting splitters/air dams on the car was always a bad idea. And they just got bigger and closer to the ground as time went on. The gradual move from mechanical grip (tires/chassis) to down force has given us some of the most wretched racing in the last 20 plus years. Instead of making the air dams smaller on the dominate makes, they gave those that weren’t performing as well larger ones. Finally, here we are with cars that have the splitters pretty much dragging the ground, sealing to the track and NASCAR can’t figure out why the cars are so aero-dependent and have so much trouble passing the car ahead of them.

The latest rules slightly reducing the down force is a very timid move in the right direction. They need to get rid of that stuff and get the cars up off the ground. They just look like crummy slot cars right now.