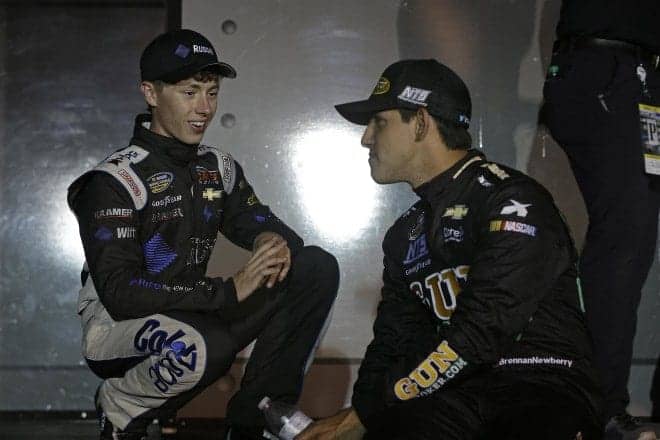 This weekend, you could conceivably see drivers on a NASCAR national series level that don’t even have their driver’s license yet.

Not to say that’s actually gonna happen; of the young’ns this weekend, everyone’s at least 16 years old, meaning unless someone decided to delay taking their test, you could meet any of them out on the lonesome road — unless a late entry changes things up a bit.

But the point is that when it comes to NASCAR at Martinsville in the Camping World Truck Series, you don’t have to be 18 to play the game.

That’s an irregularity in NASCAR. Drivers must be 18 years old to race at all Sprint Cup and Xfinity series tracks, while the Truck Series requires that age for a good chunk of the circuits it visits, including Daytona and Atlanta so far this season.

Then there’s tracks one mile long and shorter, plus road courses. There? Watch out: the teens are here.

That’s nothing to be scared about. Last year, Cole Custer became the youngest winner in history at the age of 16 (more like 16 and a half, but still), and Chase Elliott scored his first national victory in 2013 up in Canada. Even Kyle Busch raced for Roush Racing back in 2001 at just 16 before NASCAR raised the minimum age to 18 for a decade.

The idea is that at the shorter tracks, like Martinsville or Bristol, the trucks don’t carry as much speed as a Daytona or Atlanta, lowering the risk factor for the younger, likely more inexperienced drivers to race there. Same goes for road courses, regardless of the track length. Canadian Tire Motorsport Park, for instance, is a sizable venue at 2.5 miles long, but the top speed isn’t likely to lend itself to anything too destructive if an inexperienced racer had some sort of brain fart.

Given its standing as a feeder series into NXS and then into the Sprint Cup Series, it makes sense that the Truck Series would be the place for the sub-18 crowd to hit up. Perhaps one day the Xfinity Series will see a similar rule implemented at the smaller tracks despite more horsepower, but for now, driving a truck is the way to go for these youngsters.

And quite a few there are this weekend! At press time, 36 trucks are entered for 32 spots in the Kroger 250 at Martinsville on Saturday. Of those 36, four are making their first start of the year if only for the fact that they weren’t allowed to race elsewhere. That includes the aforementioned Custer, now 17 years old, plus Gray Gaulding and John Hunter Nemechek, both of whom were competitors in the series last year in a part-time role. A fourth, Jake Griffin, plans his series debut at age 16 for the Mittler Bros. No. 63 team, assuming he qualifies his way in.

The system of allowing these youngsters to race these events has already paid off in major rides for some. As mentioned, Elliott came from the series in 2013 before he was 18 and able to run for JR Motorsports in the Xfinity Series. Brandon Jones is making only his first Truck Series start of 2015 this weekend for GMS Racing, but Jones, newly 18 as of a month ago, ran the series for Turner Scott Motorsports the last two years once the age minimum was lowered. He’ll run NXS races for Richard Childress Racing this season, too.

When the dust settles at Martinsville, a seasoned veteran may just stand above the others. With Darrell Wallace Jr., who’s been a stalwart at the track, gone from the series, drivers like Matt Crafton, Johnny Sauter and Cup regular Joey Logano are far more likely candidates to score a trip to Victory Lane.

But if you’re looking for a more interesting option and don’t mind rooting for someone that may be half or even a third of your age? Custer, Nemechek and the rest are some fun bets, for sure – drivers that gain entrance into NASCAR’s top series via a rule that, quite frankly, is one of the best rule changes the sanctioning body has enacted over the past few years. Getting more young guns into a series that desperately needs some life injected into it? Yes, please.