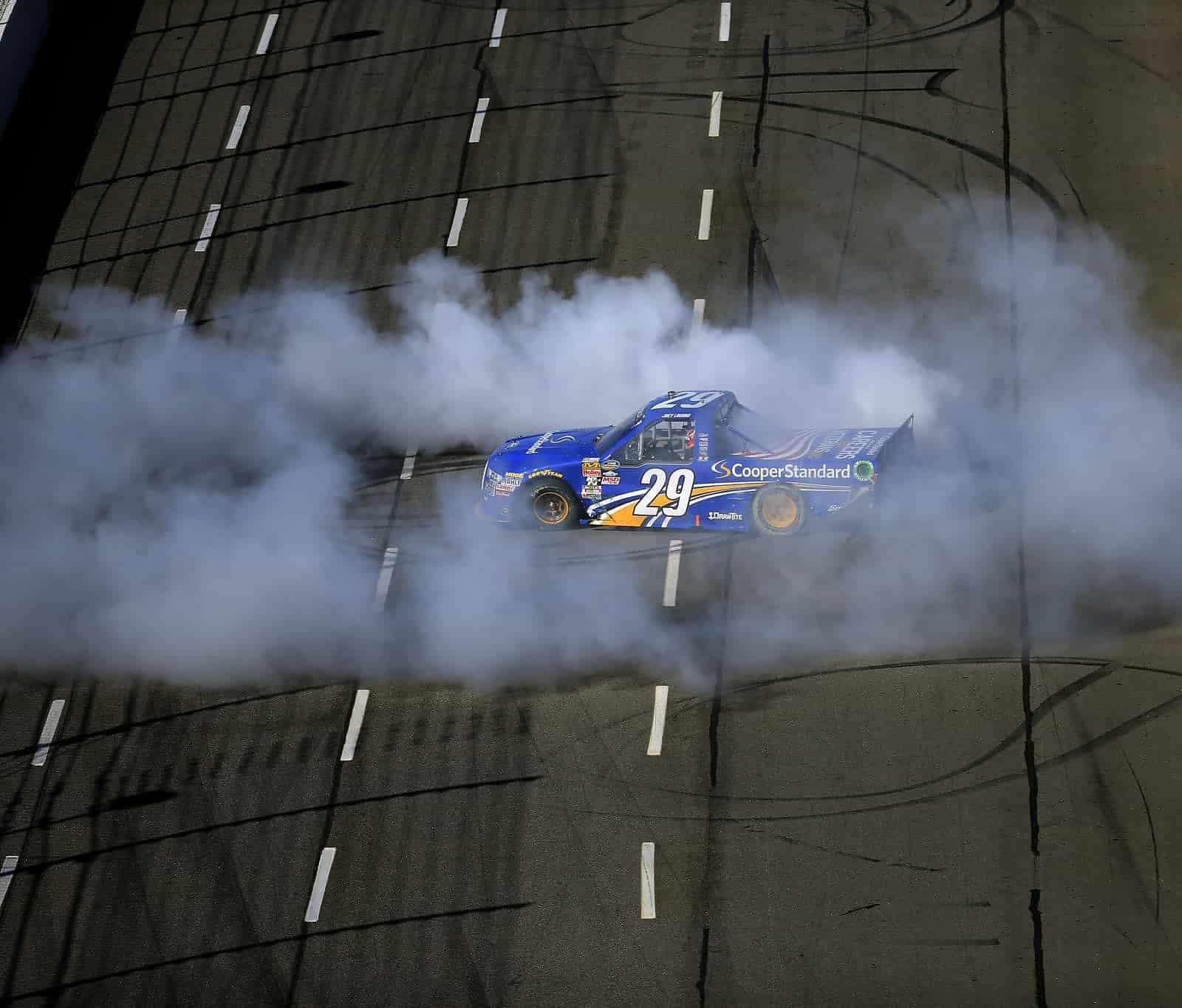 Last season, Brad Keselowski won at a short track and become the 25th driver to win at least one race in the NASCAR Sprint Cup, Xfinity, and Truck series.

In the first short-track race of 2015, Joey Logano did the same.

Logano used a daring move on the final restart to go from third to first and win the Kroger 250 at Martinsville Speedway in the NASCAR Camping World Truck Series. The win was Logano’s first in Truck Series compeition, making him the 26th driver to win in all three of NASCAR’s premier series. It was Brad Keselowski Racing’s second win of 2015.

The win ended a five-race winning streak for Toyota Racing at Martinsville. It was Ford’s fifth win at the famous paper clip.

To pull off the win, Logano needed a little help. He led every green-flag lap for the first 70 laps, holding off his competitors during challenging restarts after early cautions for spins from drivers Tyler Reddick and Mason Mingus.

Once the field went green on lap 69, they stayed caution-free for over 70 laps, the longest green flag run in NCWTS history at Martinsville Speedway. During this stretch, Matt Crafton asserted himself as a contender. He worked his way through the field to pass Logano for the lead on lap 111.

Crafton dominated the middle stages of the race, but when the field hit 50 laps to go, Logano was back on his bumper. Logano worked his way back around Crafton with 44 laps remaining and began pulling away until a lap 214 caution for a spin by Tommy Regan.

The caution and subsequent restart gave way to another battle between Logano and Crafton. As they raced one another, Cole Custer began reeling them in. Custer, 17, overcame two speeding penalties early in the race to move himself into contention in his first race with JR Motorsports. When Crafton bumped Logano up the track with five laps remaining, Custer also gave bumped his way forward and worked his way under them both to get to the lead.

The lead would be short-lived. Crafton dumped Custer with two laps left to force a green-white-checkered finish. When the race went back to green, Logano dove under both Crafton and second-place driver Erik Jones to take the lead and, ultimately, the victory.

Crafton finished in second, followed by Jones, Johnny Sauter and Reddick rounding out the top five.

Daniel Suarez got the better of a late-race battle with Spencer Gallagher to finish in sixth. James Buescher, John Wes Townley, Matt Tifft and Justin Boston rounded out the top 10. Gallagher and Custer came home in 14th and 16th after getting the worst of late-race altercations.

The field was slowed nine times, totalling 61 laps under caution.

Despite settling for second, Crafton finished well enough to move himself into the points lead for the first time in 2015. Reddick drops to second, two points back, while Jones sits six points back in third.

The Truck Series won’t return to action again until May 8th when the series goes to Kansas Speedway for the Kansas 250. The race airs at 8:30 p.m. ET on FOX Sports 1.

Logano swept the poles for both the Truck and Sprint Cup Series weekend this race. If he wins the race tomorrow, he will become the first driver to sweep both pole positions and both race wins in the same weekend at Martinsville Speedway.