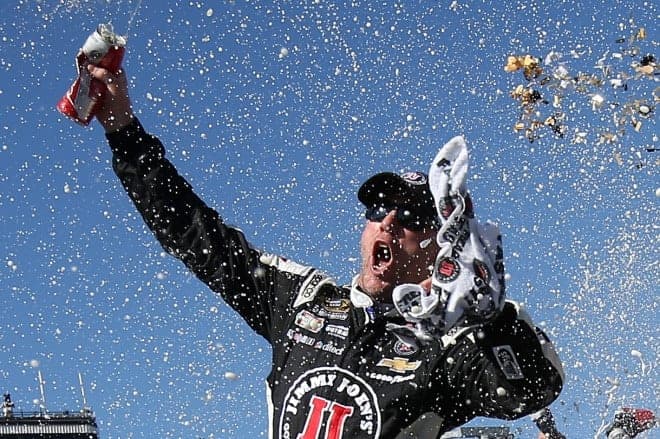 Brad Keselowski was a surprise winner last week, but what wasn’t a surprise was the performance of the two Stewart-Haas Racing cars that nearly dominated the entire race. I will admit that I undervalued Matt Kenseth and he could have snake-bit our picks had he not broken an axle.

Several of the single-car teams have been making great runs and could have been great picks. We did well with Casey Mears but it may be time to move away from David Ragan as a buy and hold pick.

Martinsville starts a short-track swing, with the exception of a Texas-sized track in between. In the next four races the drivers will cover 1,734 laps. For us fantasy players this means lots of points to be gained or lost, so this four-race swing is one of the most important of the season. For the next four races, picking the lap leaders will be our No. 1 priority.

Kevin Harvick continues to be the class of the field both in real life and our fantasy teams. Martinsville is not one of Harvick’s best tracks but that hasn’t seemed to stop him anywhere else this year. If you have been following my picks we are now 75 cents up on both Harvick and Kurt Busch. It is nice to have that money in the bank but at Martinsville we are almost required to take Jimmie Johnson and Jeff Gordon. What to do, what to do?

This is certainly a week were you want to check back in after final practice as I feel there might be some adjustments to my picks.

Harvick has been a must have week to week. He wasn’t setting the track on fire in the first practice or in qualifying but I expect him to find speed in the following practices. I wouldn’t doubt that the team is in full on experiment mode at this point as they are locked into the Chase. Either that or they are using micro lasers to drill into the tires. At this point it doesn’t really matter – he remains a must have.

Johnson is fast at Martinsville even when he has a bad year. The No. 48 leads laps here year after year after year. I believe Chad Knaus and the team have regained some of the magic from years past. The No. 48 has been fast each week and is already qualified for the chase. I wouldn’t be surprised if he grabbed the lead early and dominated.

Let’s be honest here: if the No. 41 doesn’t show the kind of speed in the two Saturday practices that he did last week this spot has to go to Gordon. However, I think Busch is out to make a point and he wont the spring race here a year ago. The good news for us is that Busch won that race from 22nd position. The bad news?  He only led 23 laps on his way to that win. So let’s see how the practices look and make a decision here. If Gordon is fast or Busch is slow then we will need to adjust.

Ragan was two laps down last week and fought his way back to an 18th-place finish. That being said, he started fourth and should have finished in the top 10 based off his lap times. While I grant the spin wasn’t something that we could predict, these are the kinds of finishes we dread when picking someone starting in the top 10. This week he starts 20th, and that makes me feel a little better, but that being said if we need to switch in Gordon we will probably have to switch out Ragan, too.

David Gilliland ran well here in both races last year and I expect him to repeat those performances this year. Gilliland starts 29th, and I wouldn’t be surprised to see him finish around 20th. Gilliland or Landon Cassill is definitely your lower-cost pick this week.

It’s hard to bet against Johnson at Martinsville.

The bowtie guys just seem to be fast week in and week out.

As always, if you have any questions about your lineup feel free to leave a comment in the comments section and I will be checking and responding to any questions. Also check in after last practice as I may modify the lineup a little.

Great analysis. I’ll have to follow up with this after happy hour. Thanks!

Well did anything change after Happy Hour……….?

Well there is the rub….I feel the best lineup is going to be something of a mix of the 24/48/4/41…….after happy hour there wasn’t enough difference for me to change anything. All things being equal I would go with the 48/24/4 but having some money in the bank with the 41 I think I’ll just stay with these recommendations hoping to gain some money in the bank moving forward.