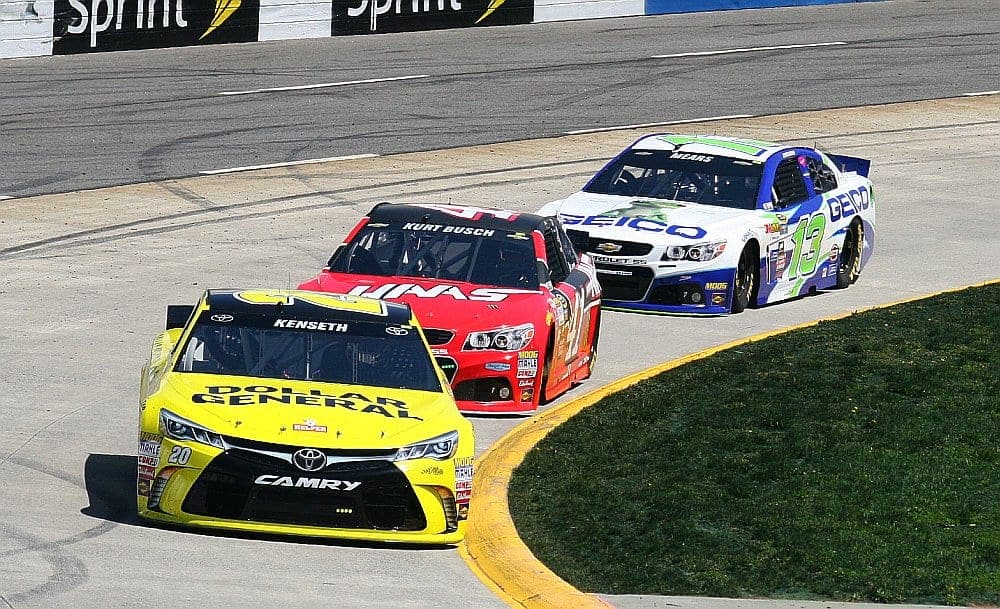 After six weeks of intense competition from the wide-open high banks of Daytona through the cramped confines of Martinsville Speedway, the oldest (and in my humble opinion best) track on the circuit, the first of just a handful of off weekends in 2015 is upon us. So you should expect a plethora of Instagram and Twitter pictures from exotic locales as the drivers take a moment to breathe away from the stringent demands of top-echelon racing. More than that, though, it’s a chance to assess where we are so far this season. First and most obviously, perhaps, the champion, Kevin Harvick, has picked up where he left off, winning twice and finishing out of the top two just once in six attempts (he was eighth at the paperclip). Teammate Kurt Busch looks like he’ll be a factor, too, which is more than can be said for the other two Stewart-Haas racers, Danica Patrick and irascible team principal Tony Stewart.

The Hendrick quartet look to have the plenty of horsepower (if not necessarily the results in the case of Jeff Gordon), and old Six-Time already has his win (and Chase berth). The Fords of Brad Keselowski and Joey Logano look strong just as they did in 2014 – each has a win and has run well.

While it was a great day for Joe Gibbs Racing at Martinsville, that’s an exception to the norm so far in 2015. Outside of those drivers, everyone else is playing catch-up – Roush Fenway Racing in particular. So as the NASCAR circus pauses to catch a quick breath, for many there is much work to be done. The good news is there are 20 more races until the Chase, so lots of time still to get things right.

Denny Hamlin’s first win of the year and Toyota’s first since Hamlin won at Talladega in early May of last year was a milestone for the Joe Gibbs Racing driver– the 25th of his career. It also extends his streak of winning at least one race in each of the 10 seasons he’s competed at the highest level of stock car racing and brings him level with Kurt Busch as the 27th winningest driver of all time. Hamlin now has two more wins than Dale Earnhardt Jr. and Carl Edwards (both on 23), six more than Greg Biffle (19) and eight more wins than Kasey Kahne, Ryan Newman and Keselowski (all on 17). Hamlin has his detractors, for sure, but it’s an impressive number to have reached.

It’s also interesting to note that 18 drivers above him on the all-time list are Hall of Famers with others in that realm such as Jimmie Johnson, Mark Martin and Gordon locks to make it. “It’s a big win for Gibbs and Toyota. It’s been roughly a year for both of us, and really myself,” said Hamlin post race. “We’re just not used to not having success, and especially with the resources that we have. Boss man over here [Joe Gibbs) expects a lot from us and we expect to be in victory lane and be up front.” For Hamlin, JGR and Toyota in general, the hope is this victory is the start of better things to come and not just a once-off exception.

And Now, Back to Your Regularly Scheduled Programming

Once we return from the week off for the Easter break, there’s a really neat four-race stretch ahead of us with trips to a quartet of the most iconic racetracks on the Sprint Cup schedule. First up it’s the lightning fast Texas Motor Speedway under the lights which will surely shake off any rust from the week off, then we head to Thunder Valley for the first of two races in 2015 at NASCAR’s own coliseum – Bristol Motor Speedway. We follow that up with another Saturday night (lights) race at Richmond International Raceway and then looming large on the horizon it’s a trip to big, bad Talladega Superspeedway. So far in 2015, by my reckoning a pretty good season with some very watchable races and some great finishes. I expect that trend to continue over the next month and after a week without racing, I’ll be itching for the engines to fire up again.

For the fourth time in the last four years, Regan Smith subbed for an ailing Sprint Cup driver. Smith subbed for Earnhardt Jr. for two races at the back end of 2012, then for Stewart at Watkins Glen in 2014. This year, he’s done it twice, filling in for Busch for three races and then this past Sunday for Kyle Larson. This time round, Smith was notified by text around 3:30 a.m. The interesting question here is what would have happened if Smith had taken a lie-in and not looked at his phone? I guess we’re not going to find that out but it’s certainly something to wonder about. “This is not one of my better racetracks. When they called on this I was like, ‘Man why does it got to be Martinsville?'” said Smith of his hard-working 16th-place finish. “But you know, it was fun to drive it all day long. Chris [Heroy, crew chief] and the guys, they worked hard with me and obviously no two drivers are alike so I was trying to do a few things a little different. We just dug all day.” With all due respect to Smith, hopefully Martinsville is the only race he subs for Larson this year. But in the meanwhile, when teams need someone to sit in and race seamlessly to a solid finish – Smith has proved to be the man for the job.

I want to finish up this week with a quick final point on Martinsville, a track I consider the best on the circuit. It’s ironic that I say this about the slowest track on the schedule, but the truth is there isn’t much that ails NASCAR that can’t be fixed – or at least put on hold for a week – by a trip to the li’l ol’ paperclip in the foothills of the Blue Ridge Mountains. Once again the venue for the sixth-ever NASCAR race, and the only track ever-present on the schedule, gave us yet another compelling race from start to finish: a race that was in question right up to the final corner. They might have changed the hot dogs this time around, but here’s praying that NASCAR never takes a race date away from this magical venue. I’m already looking forward to the Chase race.

Happy Easter, folks, and enjoy the early week off.

Agreed. Just because its fast, doesn’t make it iconic or even good. Martinsville proves that. Bruton’s hype is bigger than his tracks can deliver. That is for sure.