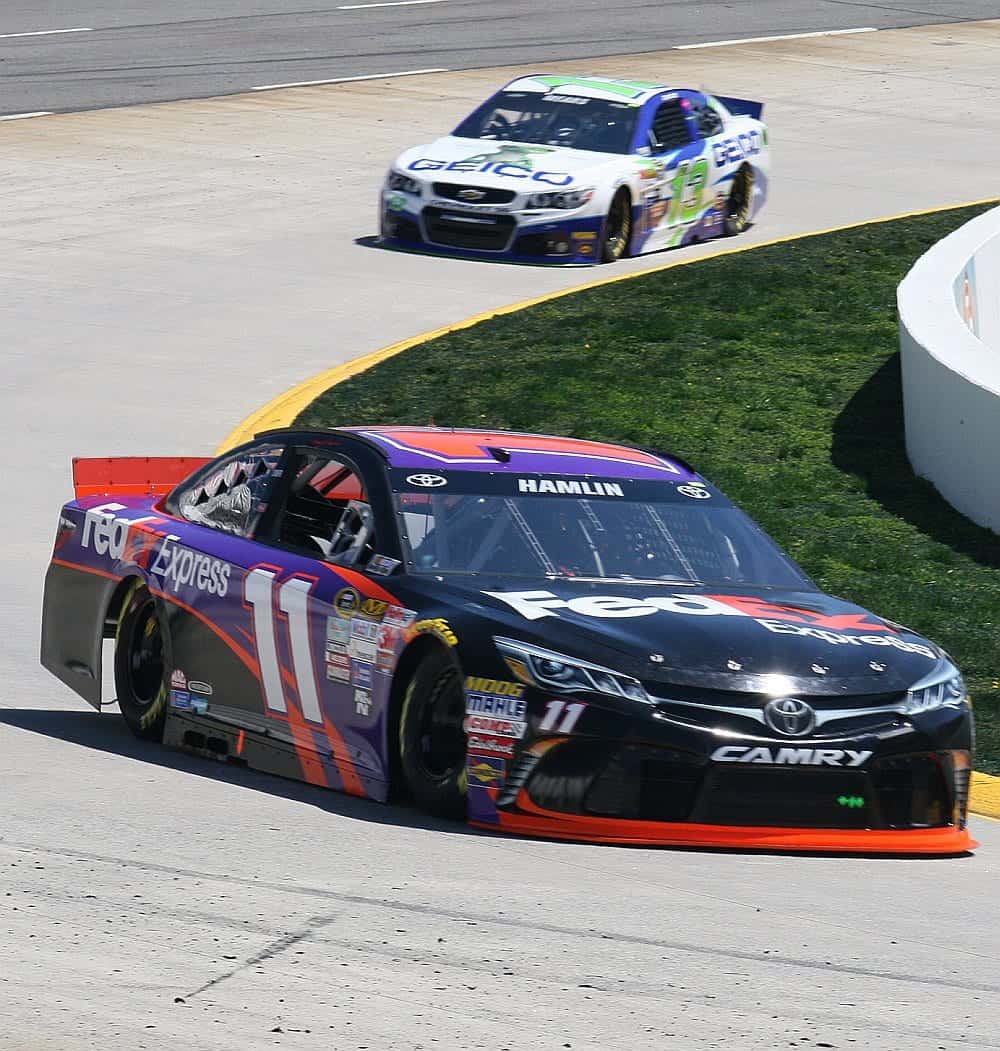 In a lot of ways, racing at Martinsville should be considered a wild card event. There are so many circumstances that could affect the outcome and give teams a false sense of security.

For example, a pit road speeding penalty played a major role in keeping Jeff Gordon out of Victory Lane. That was a fluke. The domino effect allowed Denny Hamlin to bring home a win for Toyota for the first time in something like a gazillion races. Okay, it was only 31 races, but in NASCAR, that is an eternity. Looking back, the last time Toyota was in Victory Lane was with Hamlin.

So, does this mean the Toyota slump is over? Doubtful. Toyota is behind and it has been for some time. In 2013, the Toyota camp won 13 of 36 races in the Sprint Cup Series. In 2014, it brought home a trophy only twice. It was an abysmal year and things just don’t change overnight. One win does not make nearly an entire season of poor performances evaporate into thin air.

Don’t misunderstand, three top fives for Joe Gibbs Racing is a good start to turning things around, but it is only one race. What happened to Carl Edwards? He is arguably one of the best drivers in the garage and he has had his own struggles.

All in all, Sunday was a good day for Toyota but any proof that they have found a magic bullet won’t be known until we get down the road. The series is off next week for the traditional Easter break but when the Sprint Cup Series descends on Texas – a fast 1.5-mile oval – all eyes will be watching to see if the win at Martinsville was just a lucky break.

Remember, Gordon had one of the dominant cars at Martinsville. His mistake played a key role in Toyota ending its winless streak.

On a different note, Danica Patrick matched her best-ever finish in the Sprint Cup Series. She and crew chief Daniel Knost have been together for nine races and she scored a seventh-place finish. Is that a sign that she has turned things around? Probably not.

In her post-race interview, Patrick said that in order for her to run well, it takes the team giving her a good car. It would be an insult to Stewart-Haas Racing to think she was somehow slighted in the past, considering Kevin Harvick and Tony Stewart have both won championships running the same equipment.

“Somebody asked me about being good here, and I said I’ve been driving for a good team the whole time,” Patrick said. “The car has to be good or I can’t go fast, and the first half of the race was a perfect example of that. When the car is right you can go fast, but if the driver is making mistakes and not doing a good job and crashing or getting off line, that also won’t help you have a good result. And then overall, we can’t do well, I can’t do well if the team doesn’t provide the people and the equipment that I need to perform. And so a couple of years ago if you would have asked how we all felt everything was going on the team, there probably wouldn’t be a lot of positive things to say. But that’s an example of an organization digging deep and finding ways, and by all means the last couple of years here, we’ve been much stronger, and it makes it much more fun out there.”

If you read that statement in a vacuum, you might believe that Patrick’s performance issues were caused by her former crew chief and crappy cars and not because she hasn’t done her job on the track. Of course, SHR has some of the best cars in the garage and her former crew chief is a legend on pit road. At present, Patrick is 16th in points and having a decent start to 2015. It is a contract year for her, and the word on the street is that GoDaddy is looking to put its money elsewhere in 2016. It’s a safe bet that she will need more days like Sunday, as the season goes forward, if she expects to stay at one of the top teams in the sport.

In that respect, she and Toyota have something in common. They need more than one good run to convince fans, sponsors and, most importantly, themselves, that things have turned around.

As with the drivers and teams, one good short track race does not an exciting season make. Martinsville proves that one of Nascar’s biggest mistakes was abandoning the short tracks for all those boring, aero dependent 1 1/2 mile tracks. With traffic a constant at short tracks, there is never a lack of action, something the larger tracks can’t deliver.

Amen Salb. Tracks like Martinsville produce the best racing. NASCAR completely blew it by getting away from short track racing.

Agreed, the racing is so much more interesting than the aero parades that have become the norm. That said, did anyone find it troubling that even at one of the few really good venues left there were bannered sections and plenty of empty seats?

They need to change the date back to mid-April. The place was nearly sold out when the race was the weekend after Easter. The end of March is still iffy weatherwise for that part of the country in the mountains, too. Yes it wasn’t really cold but it wasn’t comfortable either.

We usually go anyway (driving down from the Phila area) but the last week in March is a doozy for me work wise so I couldn’t leave for us to go.

John Q, it doesn’t trouble me at alo. The Frances and their “stakeholders ” made the decisions, they’re still making piles of money so good luck.

I love short track racing. I agree that NASCAR made a mistake by moving more races to “big” venues instead of keeping their product better which was always the draw for people. Bad racing does not bring people in to see it at least not on a regular basis.

Obviously I wasn’t happy that Gordon goofed on pit road and cost himself a good shot at the win but that’s the breaks, at least they got the car better as the day went on.

I thought it was interesting that a tweet was sent out about Danica equaling Janet Guthrie’s record for top 10’s by a female in NASCAR. I asked the question – how many races did Guthrie compete in vs Danica for that record? No answer on that, so I looked it up. Janet Guthrie competed in 33 NASCAR races, Danica Patrick has competed in 87 races, so it took Danica quite a bit longer to equal that top 10 mark.

I always thought she wanted to be know as a racer – not just a females racer. I love how they always making excuses for her by needing seat time but I’m watching the 17-18-19 year old contenting for wins week in & week-out. what will they be like with ‘seat time’???

I was shocked when I went to watch the post race conferences and there was Danica being interviewed in the media center. I dunno for someone who wants to be treated the same
she must have run over quiet a bit of people to get to the media center so quickly. I don’t recall the media courting anybody else when they finished P7. Was a top 10 tie with a women who did
it in 33 races vs. 87 really cause for celebration? The “celebration’ is very misleading, but the sheep want to celebrate and believe. Most don’t care to know who Janet Guthrie was or the other
women who well, were better than this one. But it is the times we live in, manufactured celebrity is about all some small brains can handle, and the media plays these people well.
I agree one race doesn’t make…anything..for Danica or Toyota.

GoDaddy- Look in the financial papers and it’s clear to see that godaddy continues quarter after quarter with big losses. So how can they justify the huge amount of money they spend on sponsoring a losing driver on one of the best teams in Nascar, anwer, they can’t and the board will make that very clear to the CEO in the coming months.
I couldn’t believe the words out of her mouth in the media center, implying she doesn’t get good cars so that’s the reason she runs 28th almost all the time. Look at the good cars that dropped out of the race yesterday and you can count at least ten that would have finished better than miss priss if not for things happening to their car. Jr, Jimmie, etc. Miss priss started in nascar with the best equipment in Nascar, yet she blames the cars or crew chief, amazing. Of course she wants to be on tv, she is going to need sponsors and she knows that. She whined so much in Indy cars they ran her out of there. Would love to see what she does in other than top equipment in Nascar, then listen to her whine. Wonder what her and Stenhouse will do for work next year ! !

you have got that exactly right! I didn’t listen to her post race whine but it doesn’t surprise me at all.

General Motors lived out of our wallets recently. They’ve lost more money than Go daddy will ever see. For what little exposure they get per dollar I am amazed that any company sees NASCAR as a legitimate use of advertising dollars.

Very true. Notice that FCA, Chrysler, hasn’t collapsed since it dropped out of Nascar.

Your analysis of GoDaddy’s financial position being tied to Danica Patrick. Is hilarious. No company is depending. On one person for their success. While they may. Very well drop her, it will be for the younger, hotter new thing, or just drop Nascar. All together. But we shall. See.

very true that the race date has a lot to do with attendance. I love Martinsville and consider it my home track even though we live in Ohio but we suffered through a race that looked like a Packers game in the grandstands-people were spending more time under the bleachers trying to get thawed out and if you did brave the seats you were huddled in anything you could find. When you pay that much for a weekend, travel gas, lodging, tickets, etc you want to be able to enjoy it. Move the race date back to mid April and I think you would see an improvement in attendance-they have one of the best races to see in person.