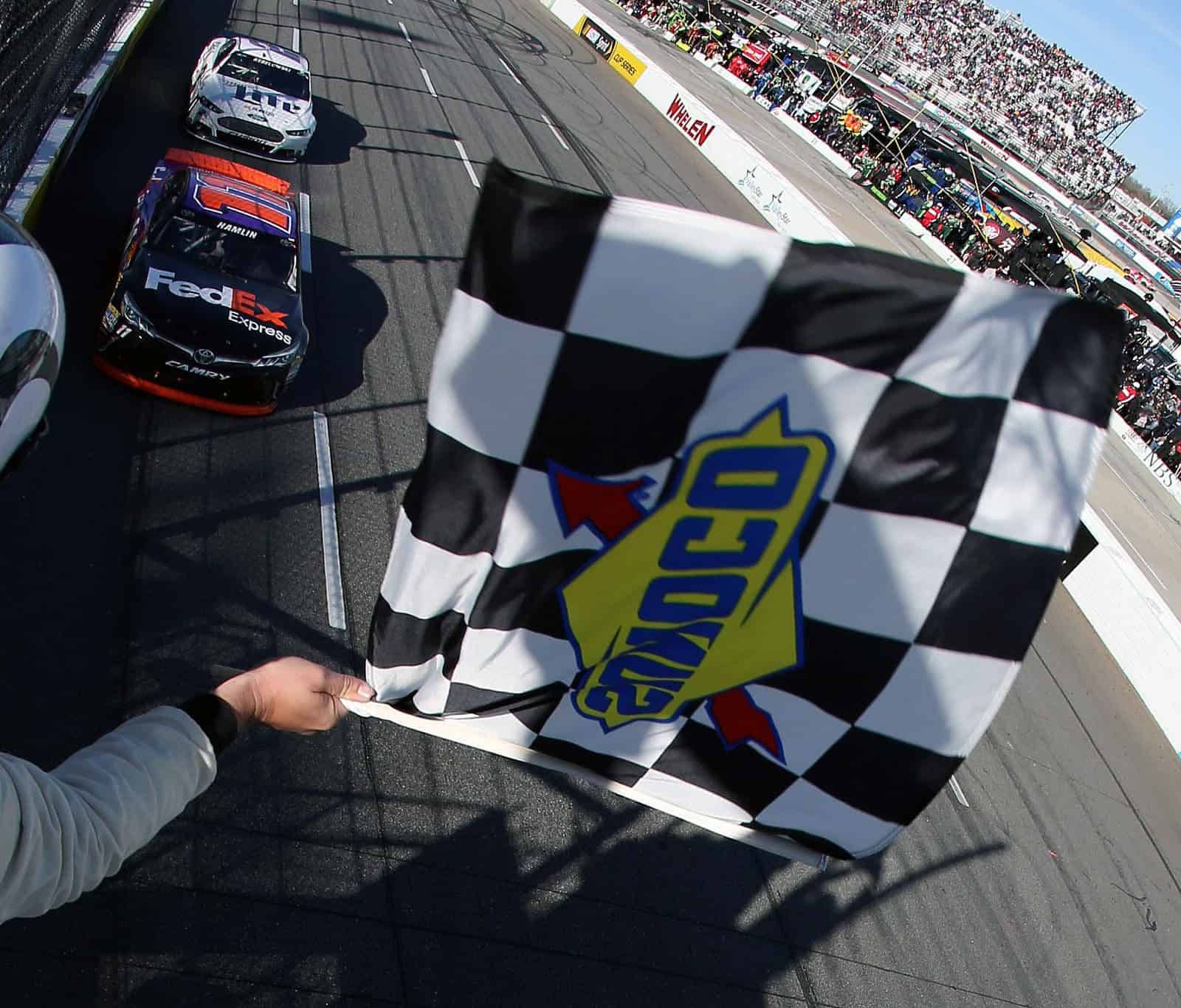 For Denny Hamlin and Joe Gibbs Racing, 2014 was a mixed bag. The organization only won two races all year and Hamlin won one of those. Kyle Busch the other.

The peculiarity of Hamlin’s season was the he was one of the four drivers in contention for the championship at the final race of the season. Using consistency, he was able to race for the title all the way to the final round. He ultimately wound up third in the final point standings.

Despite their run for the title, though, there was no denying that JGR lagged behind. Team Penske, Stewart-Haas Racing, and Hendrick Motorsports were all winning multiple races. That wasn’t abnormal, but it was abnormal to not see JGR competing right there alongside them.

As 2015 started, there was question whether or not that might be the case again. The SHR, HMS and Penske teams all combined to win the first five races of the season. Meanwhile, JGR showed a goose egg in the win column and lost Busch in the season-opening Xfinity Series race at Daytona. Carl Edwards was added to the JGR stable over the offseason, and the team faced finding a substitute driver for Busch before the first green flag of the Sprint Cup Series season ever waved. Matt Crafton filled in at Daytona and David Ragan has been the go-to driver ever since. In other words, JGR has been in the headlines all season long but not for the reasons they were hoping for.

Fast forward to last Sunday’s race at Martinsville, where Hamlin finally made it to Victory Lane in what was the team’s first victory since May of 2014, when Hamlin when won the spring Talladega race. Hamlin was not the dominant driver in Martinsville by any means, that title should go to reigning champion Kevin Harvick who led a race high 154 laps. Polesitter Joey Logano led 108. Hamlin led the third most laps, with 91.

That didn’t matter, because he led the most important one: the last one – in a tight battle with Brad Keselowski during the remaining several laps of the race. Even if the No. 11 car wasn’t the strongest, it was strong enough to overcome adversity such as a penalty for a tire violation earlier in the race. While Hamlin wasn’t the only driver who had to overcome mistakes, penalties, or any variety of incidents over the course of the event, he was the driver who went home with the grandfather clock. Isn’t that what everyone was there for?

The JGR organization has been in the headlines for another reason in 2015, though. JD Gibbs, president of JGR and son of team owner Joe Gibbs, is undergoing treatment for “symptoms impacting areas of brain function” according to a team release. Doctors believe the symptoms are related to a head injury Gibbs would have sustained at an earlier date, but no injury has been named as the cause. As a result, Gibbs’s at-track presence will diminish, even though the team says he will still maintain his daily duties at the race shop in North Carolina.

This news made the weekend of Martinsville more motivational for JGR, and especially for Hamlin. After earning his fifth career win at the Virginia short track, Hamlin explained how instrumental JD Gibbs was in getting him to here he is today.

“It was about 12, 13 years ago really when JD happened to just show up at a Hickory test where we were running some late models, and he made a phone call to his dad and thought maybe he had something there that was special,” Hamlin explained in the media center post-race. “They signed me up, and JD was the key to making that happen. I got propelled into the Cup Series, and one year from late models to the Cup in just one year, and it was a lot for me, but they believed in me and they gave me opportunities to succeed.”

For Hamlin, hearing the news about JD was tough, and he still takes the opportunity to express his gratitude.

“I thank my lucky stars every day that I was able to get in the car that I was able to get into because so many young guys come into this sport and don’t get an opportunity with a good team, and I was put with a great race team, and things worked out for me in my future, and it’s amazing looking back on it how everything played out,” Hamlin continued. “But these guys gave me my chance, and JD was a big key to that.”

It’s amazing how those things work out, isn’t it? Suddenly, the team had something to rally around — not just with the absence of Busch (who may still be able to return later this season) but with Gibbs now facing symptoms that are detrimental to his health. Maybe that is what gave the team the extra motivation they needed to finally make it back to victory lane.

Well… maybe that wasn’t the only reason.

“We had the longest competition meeting I’ve ever been a part of this past weekend,” Hamlin said, referring to the team’s normal Tuesday routine. “Joe [Gibbs] raised his voice, which doesn’t happen very often, told us to get off our tails and go to work, and we all did it, and great result for this race team.”

And Hamlin thinks maybe that meeting, more than anything, was what the team needed most.

“Sometimes you need a leader like that to kind of put things in perspective,” Hamlin continued. “Not that people weren’t working hard, but it just takes that extra 10% out of everyone to get to that next level, and I’m very proud of the speed that we’ve shown with our 11 team so far this year. We’ve run top five every single week except for Phoenix, and we’re going to work on that.”

Hamlin is right. JGR as a whole, while not great, has not been awful this year. Hamlin has had three top fives in the first six races. Edwards has yet to crack a top 10, but that doesn’t necessarily reflect the performance of the team. Edwards was in the top-five for much of Sunday’s race at Martinsville, and led a total of 13 laps, before a cut tire relegated the team to a 17th-place finish. Kenseth has three top-10 finishes to his credit this season and was in contention to win on Sunday as well. Ragan finished fifth in Martinsville, and hasn’t finished 21st in any race he’s been in this year. For a substitute driver, that’s decent and his performance in Martinsville was spectacular.

In fact, for much of the race, in wasn’t uncommon to see all four cars JGR cars running in close proximity to one another in top-10 positions.

Now, granted, JGR is not at the level of many other teams that already have wins this year, and everyone at JGR is aware of that. However, the Martinsville victory may very well have been a shot of momentum the team desperately needed, especially considering that Hamlin’s win all but locks them into the Chase for later this season. This will give the No. 11 crew a chance to experiment with setups before the post-season begins, which could benefit the organization as a whole as the team shares information, something that Hamlin says he and his teammates are very open about doing with one another.

“I’ll always be a total open book to those guys, and they’ve been awesome teammates to me this year,” he said. “I’m really excited about what Joe has put together, his driver lineup, and the way we’ve worked together so far.  It’s really been fun.”

Whether that’s bad news for the competition remains to be seen, but Martinsville certainly seemed to indicate that JGR will be more of a factor in 2015 than they were last year.