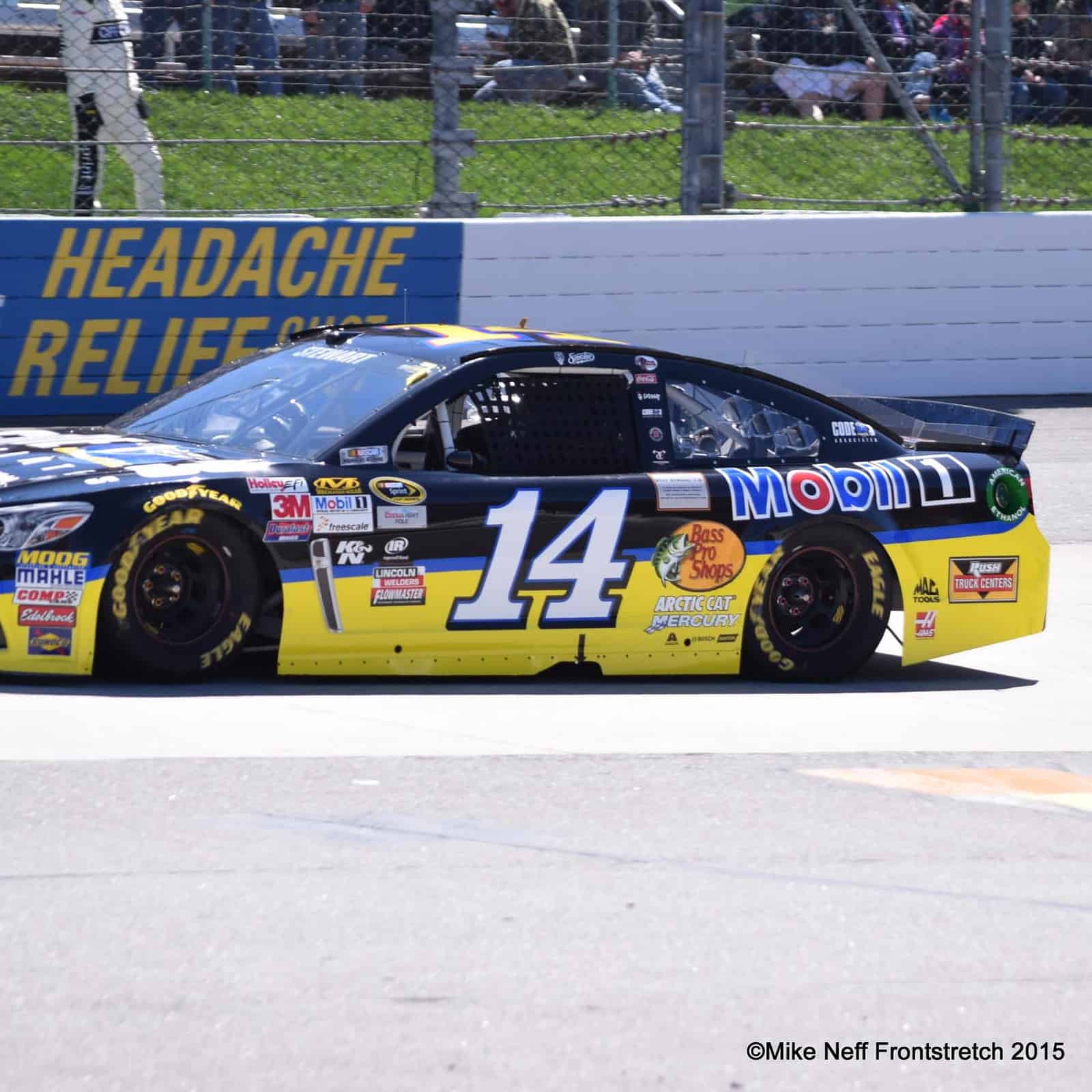 We’re now six races into the 2015 NASCAR Sprint Cup season, and what a six-pack of ups and downs it has been for fans and teams alike. Who would have thought that the kind of dominance we’ve seen out of 2014 champion Kevin Harvick would come so early in the season, and that single-car operation Furniture Row Racing and resurgent driver Martin Truex Jr. would be sitting third in points. It has been quite an entertaining start to the season, filled with so many storylines it’s almost hard to keep track of them all.

Kyle Busch‘s injury, Stewart-Haas Racing’s early surge with Harvick and Kurt Busch, while owner Tony Stewart still struggles with his on-track performance. Toyota’s speed struggles, the problems over at Roush Fenway Racing. Those are only some of the storylines that have hit the headlines so far this year, and the racing product on the track week in and week out has been decidedly exciting too.

This weekend off is much needed after west-coast swing to kickoff the season, and everyone involved with the sport has truly earned it and will enjoy this week off of competition.

Q: Greg… What’s up with the Race Team Alliance? I’ve barely heard their name mentioned so far this season. I’m sure they prefer to conduct their business quietly and behind closed doors, but have you heard of any issues they are working on or specific changes they are pushing for? – Carl D., (Location Unknown)

A: Hey Carl, thanks for writing in this week. The Race Team Alliance (RTA) has been really trying to work on items with NASCAR’s help that will ultimately save the teams money in the long run, as head of the RTA, (Michael Waltrip Racing Co-Owner) Rob Kauffman stated in the Alliance’s most recent media interview with Jeff Gluck of USA Today back in January of this year. The RTA’s philosophy has been if the teams can collectively save money on services or items that are common or universal to all teams that compete in Sprint Cup racing, then it will allow the teams to continue to grow and therefore create a healthier NASCAR for the future. Today, 18 Sprint Cup teams are a part of the RTA, which accounts for all the major teams, except for single-car FRR.

As Kauffman mentioned in the article, the things that the RTA has been focused on haven’t been all that exciting right now, but there has been a lot of speculation as to why the organization was founded and what the race team owners really want out of NASCAR. As you’ll remember the RTA was founded after a massive new long-term TV contract deal was signed this past summer by NASCAR and TV partners FOX and NBC. There was new money flowing into the sport, and the least of that pie would ultimately see its way to the individual teams. The sport’s sanctioning body, tracks and track promoters saw (and will see) the lion’s share of those deals, leaving the team owners wanting more.

NASCAR and the RTA have so far existed together harmoniously. But the question is still out there as to what the group will ultimately get out of Brian France, if that is what they want. As Gluck stated, and has been talked about, could the alliance seek some sort of franchising for Sprint Cup teams in the near future? NASCAR is really at a crossroads with Sprint leaving the sport in 2016 and a new title sponsor coming onboard. You have to believe that the RTA will want to be at the forefront of the deal for a new title sponsor of the sport, and what they will bring specifically to the teams.

You can keep up with the RTA’s latest news at their website, www.raceteamalliance.com

Q: Greg, My favorite driver is Joey Logano. With him winning the Truck race over the weekend at Martinsville, I’ve heard a lot about people unhappy with a Cup-regular winning a Truck Series race. What are your thoughts on this, and do you think NASCAR should limit the series that the Cup drivers can race in? – Peter Q., Bellflower, Calif.

A:  Logano was actually a big surprise to me on Saturday afternoon too. I honestly didn’t see him as a serious challenger to the mainstays of the Truck Series like Matt Crafton, Johnny Sauter, James Buescher and now Erik Jones. But he pulled off a solid race, keeping his No. 29 Ford clean and in one piece and was there at the end to pass last season’s defending champion Crafton. He now has his first victory (in just seven career starts) in the Truck Series and holds a win in all three top national series.

To your question on my opinion of whether its appropriate for Sprint Cup series regulars, like Logano, to be driving down in the Truck Series, which can be considered technically as a developmental series to the Xfinity and Sprint Cup series, my answer is: yes. People have debated this issue forever, especially over the past few years when we’ve seen Sprint Cup champions winning in the lower series each week, stealing the spotlight and the trophies away from those truck-only or NXS-only race teams and drivers.

But what is important to remember, although it sometimes can be overlooked, is that NASCAR’s position is not to intervene and tell one of its competitors that they “can’t” race in a particular series. The sanctioning body has made it very clear that if a Sprint Cup regular has a seat in a Truck or NXS ride and wants to run every race they can. What it comes down to is the NASCAR doesn’t want to tell a driver how he (or she) can or can’t earn a living. And at its core, that’s what this is.

Now, what NASCAR had hoped was that by making drivers choose which series they would declare running for a championship title in at the start of the season, those drivers who were Cup regulars would drive down less and less. That has actually helped in getting more young talent into the lower series, and that’s definitely a positive change for the sport.

Q: With this off-week coming up this weekend, which driver do you think needs an off-weekend break the most right now? Thanks. – Brian P., Rochester, N.H.

A:  That’s a great question Brian! Here’s a quick rundown of four drivers who I think can really use this off-weekend…

Thanks for answering my question. I suspected the RTA was all about getting some of the TV and title sponsor money that Nascar doesn’t like to part with. As Pink Floyd says, “Share it fairly but don’t take a slice of my pie”.

I didn’t know there was a website for the RTA. Thanks for the link.

Good answers. As a fan, I disagree with you about having Cup regulars race in the trucks and Comcast series because they do it TOO often and it takes away my interest in these two series. I no longer watch either one.

Watch the truck series for five minutes and you’ll see why every competitive endeavor known to man has classes. Cup drivers have killed the series since….surprise….there is not much interest in competitive events with forgone conclusions. Cup drivers do not belong in the lesser series if for no other reason than fans do not want them there. Don’t believe me. Check the stands. There aren’t enough people there to share a cab ride home.

Is it the cup drivers or the megateams JV squads that are the problem? Then there is the possibility that the truck concept has simply run its course. That there is no interest because, people arent interested in seeing cars with fake truck bodies running around in circles.

Good points all. Could also be that what is left of NASCAR fandom doesn’t have much interest in japanese truck racing. Who knows? Still, Cup drivers in lesser series certainly don’t help. Any event that is almost non competitive by design is probably not going to draw much of a crowd. About the only thing we can count on is that of all available options NASCAR will unfailingly find the worst.

I’m not sure, it could certainly be a combination of all of that. I don’t watch the truck races on tv because of the Cup drivers AND Mikey Waltrip with his megamouth in overdrive.

I might consider going in person but unfortunately their schedule and mine (since I’d always have to travel) simply don’t intersect. I’m not interested enough in them to spend $$ for hotels & rental cars.