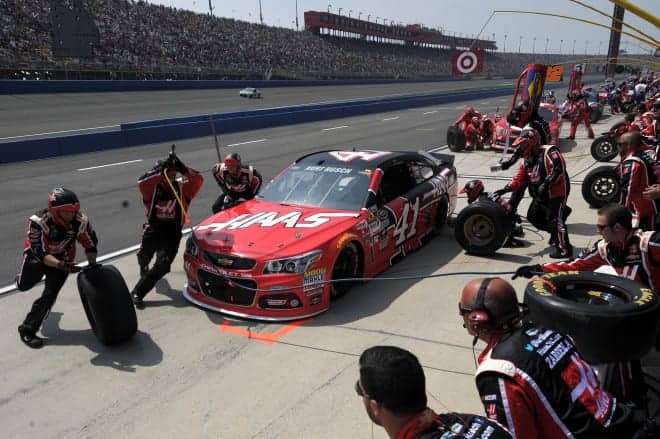 There are a lot of very descriptive words that get bandied about in NASCAR. Some of them aren’t even fit to print. But it seems that one word has come to the forefront in recent weeks, and it’s only mildly dirty: rules.

Actually, if you’re following them, it’s not so much a dirty word as an annoyance, but in NASCAR it’s less about following them and more about seeing how far you can bend them without getting caught. It’s been that way for almost 70 years; it’s not going to change anytime soon.

Much of the discussion in 2015 has been focused not on who’s breaking the rules, though, but rather on the new ones meant to change the way the cars handle and improve the action fans see. The new package has changed how the cars handle, but the jury’s still out on the racing. Until teams get a better handle on the cars, it’s hard to gauge the end result. One thing the new rules seem to have done is level the playing field slightly. The balance between the top teams and the small ones hasn’t shifted much, but a few middle-tier teams with whom the new package seems to agree have really stepped up their games. Just look at Furniture Row Racing, which, after scoring five top-10 finishes in all of 2014 has six in six races this year. Or Richard Petty Motorsports and Germain Racing, who both have drivers in the top 15 in driver points, deep enough in the season that it’s not just riding the wave of a good Daytona 500 finish.

Unfortunately for these guys, the competition from the top will heat up as teams get their act together, but for not, it’s about who’s got a jump on handling. It’s good for the sport to see some new faces closer to the top of the game.

Another rule that’s gotten its share of press this year is a positive — some might argue the only positive — to come out of the new Chase format introduced last year. Because qualifying for the Chase now relies more on wins than on points, a driver can miss a race or even a few races due to injury or illness and still qualify. That’s not only fair, it’s actually a matter of safety, an area where NASCAR can never stop looking for every possible improvement, however small. In this case, a driver at less than 100% can certainly be a liability to others.

The rule has been used a couple times already this season: for Brian Vickers, who missed two races following off-season heart surgery (before blood clots took him out of the car for several weeks) and for Kyle Larson, who missed last Sunday’s race after passing out at an autograph session due to dehydration. The same exception was granted to Kurt Busch after he was suspended for the first three races of the season.

That use of the injury waiver: allowing a driver who was suspended by NASCAR to compete, it not as cut-and-dried as it is for a driver who was injured or sick, and it sets a precedent that NASCAR might not want to let go. Perhaps the waiver for Busch was an attempt at an apology for suspending him before his entire case came to light, but even so, allowing a driver who broke rules severely enough to warrant a suspension to compete for a championship might not be a road NASCAR wants to start down.

NASCAR’s rules came into play in yet another way this week as Richard Childress Racing driver Ryan Newman and his team were penalized heavily for altering the tires on the No. 31 car in Fontana. Tires are one area where anything hinky will bring a swift and hefty punishment. They’re part of NASCAR’s holy trinity of things you don’t mess with: engines, tires, and fuel. NASCAR came down hard on the team, and while it was the right call, the infraction falls into one of two categories when dealing with tires: bleeding them (as the No. 31 was caught doing) to keep tire pressure lower and the car therefore faster and soaking them, which means adding any kind of substance that would increase grip.

Bleeding the tires is probably the lesser of two evils, and it has begged the question of whether the rule is outdated; other racing series allow the use of bleeder valves for regulating tire pressure. NASCAR no longer mandates minimum tire pressures, letting teams pay the consequences for underinflated Goodyears, leading to questions as to why bleeding the tires isn’t allowed. While just about everyone would agree that soaking tires is blatant cheating, some don’t feel the same way about bleeding them, and perhaps it is something that needs to be addressed in the future.

However, the future is irrelevant when looking at the latest infraction, and that means that, unless the team can show that there was no attempt to circumvent the rules, the penalty was absolutely warranted, including the additional points taken because the infraction was found after a race.

Yep, rules have been the talk of the town in 2015. What to do with ’em, who they help, who’s breakin’ ’em — all good topics of discussion. How will it all shake out? Stay tuned, because one thing’s for sure… the story ain’t over yet.

I am still hard pressed to understand why people say “The Chase” is all about wins! Tell that to Brad K. with 6 wins last year and was shut out of the 4 driver dog and pony “shootout” and Ryan Newman was allowed to play. That’s just for starters…….

I’m hard pressed to understand this incessant whining about the Chase. Of course Nascar loves it because its nothing but free publicity. But I don’t ever hear anybody on the street talking about it.
But maybe I’m missing something.

Russ, I don’t hear anybody on the street talking about NASCAR period. I’m the only person I know that still watches and I’m trying to quit.

..Well Russ, that’s why I put my disclaimer out there to save your head from exploding…:) Apparently you read it anyways. I can explain it to you but, I really have a feel you won’t be interested and will say the same thing..regardless.

you’re probably right. However my point is simply that imho people are fans of the individual races not a championship regardless of the name or format.

I think you are right about that. I don’t remember people ever all that excited about the Championship. As I recall the actual race was usually the topic of conversation back when people actually talked about NASCAR on Monday morning.

Russ, it is about perception of what will be in the record books when nobody will realize or care what the formula was to get to that once exalted status as “Champ”. It goes to the fact that NASCAR is not rewarding season long anything, but is looking at itself more as an entertainment venue rather than a sport event. Yes, yes, yes..there is always a element of entertainment in sports, but NASCAR has taken the blood, sweat and and hard work of drivers and teams to make it a “show” for the few idiots that will be on to the next thing. “The Chase” epitomizes what is wrong with the management and what we who actually love stock car racing abhor. “The Chase”, it’s phony cautions, etc. Let the process play out naturally and let the best man win, screw those “fans’ NASCAR is looking at, the 15 minute attention people. NASCAR is rich in history and was part of American pride, it is now a WWE joke. And I will continue to talk about “The Chase” because it has become a symbol of what is wrong with this once proud America Sport. Happy Easter!!!!

NASCAR rules are like island weather, changes every half hour or so. As mercurial as the rules are it is hard to take any of them seriously.

The crapshoot chase is all about having good luck when you need it. A win is nice to lock you in, but luck and the dice rolling in the right way is what winning NASCAR’s “championship” is all about now.

Which is why more and more this sport ranks on the “who cares” list for many fans.

Was Newman bleeding tires in the chase last year, and has Truex, who only has TWO cup wins in his entire career, been bleeding tires this year ?
No way Newman, a really good wheelman for many years in cup not know that his cars and tires weren’t falling off as they normally would in long runs, he had to know. Add to the fact that Newman is also an engineer, he know all right. His intentional punt of Kyle Larson should have been dealt with last year and Newman not allowed in the chase because he didn’t race his way in, but instead used his car as a weapon against Larson to get in the chase. After saying all this, bet RCR wins their appeal AND i also bet that starting at Texas both Newmans and Truex’s cars aren’t running in the top ten at the end. That will be revealing about both drivers and teams.

What I find interesting about the Newman punt is how the idiots in the booth strongly defended that move. Any other time if MOST drivers did that, the booth had no problem voicing their displeasure about it, and they would keep harping on it. Nope according to them Ryan “did what he had to do” to get into the stupid stick and ball playoff scenario….they had to sell, sell, sell the excitement of Ryan’s move of getting into the wonderful, fantastic playoff…without a win no less. “Win and your in”. God this sport has lost it way, big time for a long time.

kb, yes, I agree with your point about the booth. Normall the booth would be all over any driver who did that sort of thing, but because it resulted in Newman making the final 4 well, it was OK.

Blech. they make me sick.