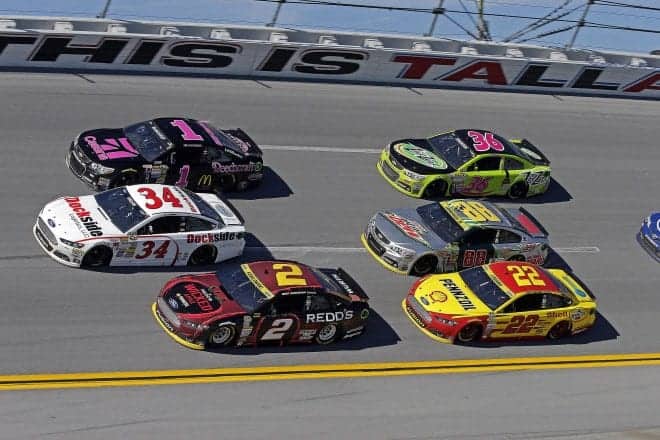 When NASCAR returns to a restrictor plate track, drivers will get the change they wanted. Gone will be wrecks like this, and back, in theory, will be a focus on individual speeds and safety.

I know what you’re thinking: that’s great and all, but how will it work? Well, it’s actually pretty simple.

The rest of the format changes are a bit more severe. Teams will no longer be able to qualify when they want. Instead, they will be organized based on a random draw, much like the series did before 2014.

Once the order is set, qualifying will begin. In order to prevent any team from gaining an aerodynamic advantage, teams will be released one car at a time, in intervals determined by NASCAR. Gone will be drafting and the risk of large group crashes. Instead, fans will be treated to a format similar to that seen at the road courses in the past.

When drivers are on the track, they’ll have to go big or go home. Each driver will get only one timed lap before being required to return to pit road. If a driver spins or otherwise messes up their lap, they don’t get another chance. There will be no time limit, with the first round ending after the last driver completes their final lap.

After round one comes to an end, NASCAR will allow the top-12 teams a 10-minute break. During this break teams will be able to apply cool-down units and make any necessary tape adjustments to their cars. Meanwhile, NASCAR will get to work determining the field and prepping for the second round. The 12 advancing teams will be reordered for round two based on their round one speeds.

NASCAR intends to use this format for the three remaining Sprint Cup Series restrictor-plate races at Talladega and Daytona, though the format could change again if more issues arise. The qualifying format for the 2016 Daytona 500 will be announced at a later date.

Fans and teams alike demanded change after Daytona 500 qualifying, and NASCAR delivered. Drafting, blocking, and other group madness will once again be saved for race day. Is this format the correct answer? I don’t know. Is it a step in the right direction? Most seem to be thinking that’s a yes, however small it may or may not be.

Happy to see the failed experiment come to pass, but holding onto a two “round” format makes me scratch my head. Kudos for displaying the grapes to experiment & kudos for flushing it once it proved to be flawed. I think there is no doubt that they have successfully eliminated the main problem. Thankfully, drafting during qualifying is a thing of the past. Nixing that was an absolute necessity & makes for major improvement. But in my opinion, the remnant “rounds” are a transparent marketing ploy that is somewhat counter-intuitive & hypocritical. This seems to indicate they are still willing to forgo the competitor’s cost reductions & safety to instigate profit, albeit to a much lesser degree than before. So, while I acknowledge & appreciate a major misstep has been eradicated, I’d much rather see “one & done”.