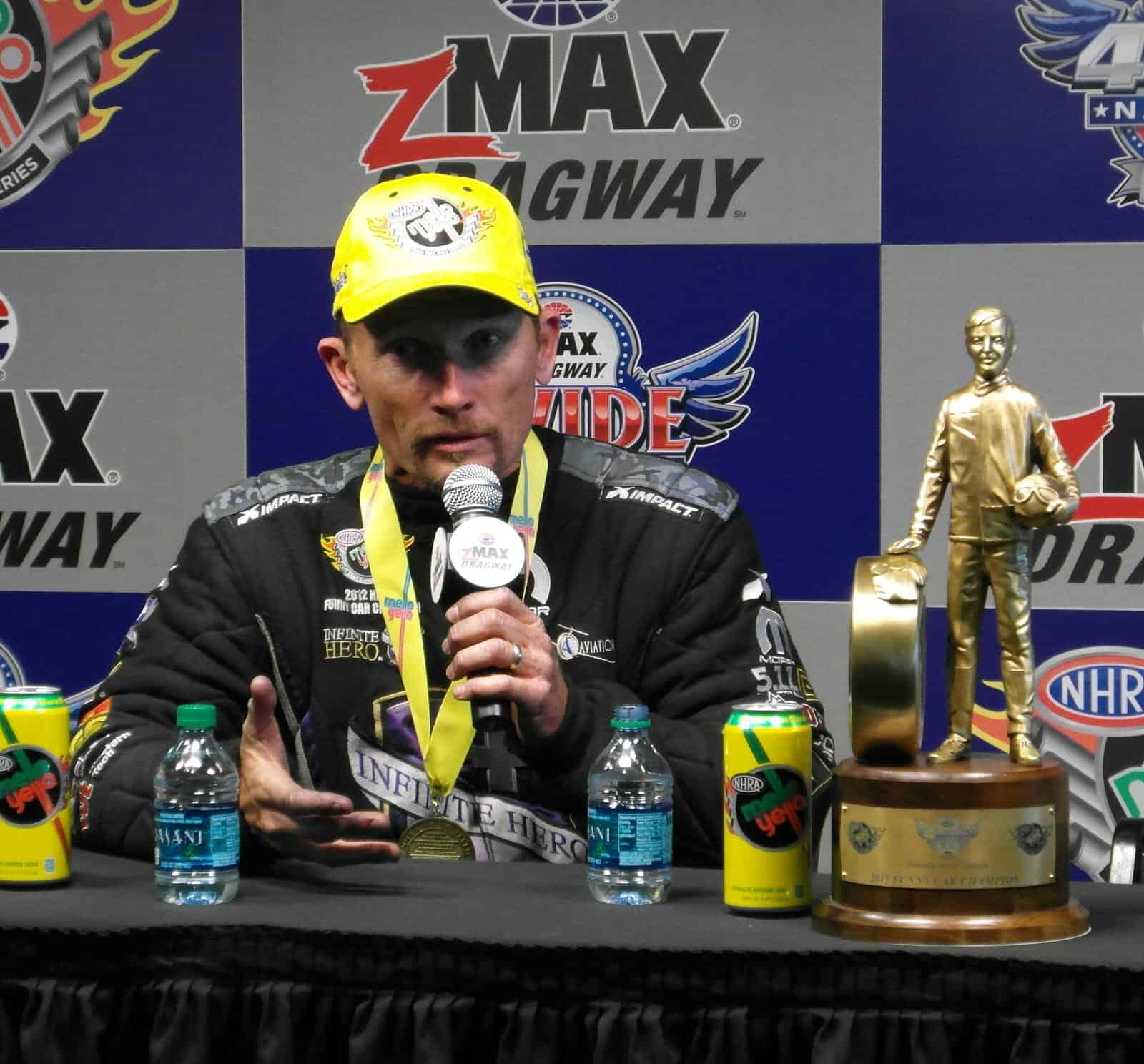 Coming out of the 4-Wide Nationals, you can’t help but take note of all the really odd things you can only see at that race. There were a number of them last weekend, continuing to make Charlotte unique. Pro Stock came out of the box with a twin serving of odd, with a double holeshot on the first elimination pass followed by a triple redlight on the next. In the case of the first, Allen Johnson ran fast E.T. of 6.463 in his quad, but went home anyway because both Jonathan Gray and Greg Anderson beat him on reaction time. In the case of the second, Vincent Nobile was the only one of the four in his group not to foul, but Jimmy Alund went on anyway because he redlighted by the least amount.

In Top Fuel, one quad couldn’t seem to make up their minds where to start. Lane choice goes to the highest qualified driver, second choice to second qualified, third to third fastest, and the other driver gets whatever is left. The group of JR Todd, Antron Brown, Dave Connolly and Shawn Langdon played musical lanes when Todd, fastest of the group, changed his mind, prompting changes for Brown and Connolly as well. Langdon’s team, being slowest, simply pulled their car back and waited for the other three to sort it out.

Both Top Fuel and Funny Car saw a whole lot more pedaling going on than the norm thanks to the unique format. In a two-wide race, particularly if one driver runs off cleanly, a driver who spins the tires or gets sideways usually gets out of the gas, but with four lanes and no idea what’s going on in all of them, drivers keep their foot in it more often. Brown, Steve Torrence and Doug Kalitta pedaled furiously in round two because they heard Connolly explode his ride off the line, except they didn’t know whose car it was. That was followed by the sound of drivers getting in and out of the throttle. Knowing the other drivers were also in trouble, they all did whatever they could to get them down the track. Ron Capps got dead sideways, and although he’d seen Jack Beckman drive away, he heard someone he couldn’t see struggling on the other side of the wall so he dirt-tracked his car down the lane. Unfortunately, he tagged the wall and fouled out, giving the pass to the next round to Tommy Johnson Jr., who thought he was out of it.

The unusual lights threw Funny Car champion Matt Hagan off his game. Drivers see staging lights for all four lanes and Hagan apparently looked at the wrong ones. He timed out, thinking he was staged, but his foul was not the end of the confusion. Tim Wilkerson said he never saw the amber lights and sat on the starting line while John Hale and Cruz Pedregon drove off, with Wilkerson believing those two had redlighted and he’d gotten a free pass to round two. Wilkerson ended up with a 4.096 reaction time while Pedregon, who said he didn’t see the lights either, and Hale continued.

Love it or hate it — and there are opinions on both sides of the fence – the 4-Wides happen only once a year, an event unique to drag racing. Next time out, it’s back to traditional two-by-two racing.

“Boy, it just went into instant tire shake and pulled loose and turned sideways. Then those instincts from my dirt track experiences kicked in like when I raced at Eldora (Speedway) and that really helped.” – Ron Capps after his car got sideways in round one.

“I actually watched Doug blow up in front of me and I was hoping I could chase him down. I just ran out of real estate.” –  Spencer Massey, who’d spun his tires, but pushed on trying to catch a flagging Kalitta. He came up just a little short.

“Those milestones are huge for this class. It’s one of the last big ones in NHRA Mello Yello drag racing – 200 mph with no seatbelts on top of a motorcycle. We’re working on it.” – Pro Stock Motorcycle winner Andrew Hines on the prospect of breaking the 200-mph barrier in the class. Hector Arana Jr. came close in Charlotte, with a run at 199.88 mph.

2008 – Won three of seven final round appearances; remained in contention for championship until the final race of the year.

2005 – Competed in Top Fuel; raced to semifinal finish at Englishtown.

Some Things Most People Don’t Know About Jack: Has taught more than 7,000 aspiring racers as a consultant at Frank Hawley’s Drag Racing School; licensed in 12 different NHRA categories; veteran of the U.S. Air Force where he achieved the rank of sergeant; cancer survivor.

Beckman offers military style challenge coins at each NHRA race. He sells them for $100 each and then takes them along in the car during the race, signing and returning them afterward. People who bought coins this past weekend got an extra special piece as Jack won the race. All of the money from the coins is donated to Infinite Hero. Last year, Beckman raised about $70,000 with his coins.

And finally, here’s Beckman with the craziest thing that’s ever happened to him at a racetrack.

The terms pedalfest and pedaling came up quite a bit at the 4-Wides, so what do they mean? When a driver loses traction with the rear tires, they will try to lift off the throttle and then get back on it again in an attempt to regain traction. When both, or in this case, multiple drivers have to get on and off the throttle to try to get their cars down the track, it’s a pedalfest.

Reigning NASCAR Camping World Truck Series champion Matt Crafton was at zMAX Dragway for the 4-Wide Nationals as a guest of driver Todd and Kalitta Motorsports this past weekend. Todd and Crafton share sponsorship from SealMaster, who set up the visit. While at the track, our Mike Mehedin spoke to Crafton about his experience at the 4-Wide Nationals. To read what he had to say about his race at Martinsville as well, check out today’s edition of Truckin’ Thursday for the full interview.

What’s your impression of the 4-Wide?

The 4-Wide is crazy. It’s a little bit harder to follow when you get all four of them out there. They go by so fast and you try to pay attention to all four of them. You pretty much can’t. You have to focus on one or two. It’s crazy. It’s so intense. These guys are very brave. We’ll just say that. I’ve stood at the finish line and watched these guys go by and when they go by at 300+ mph, they’ve got it going on.

Have you been in the pits at all?

Yeah. I went to the Kalittas and Todd and they showed me around and did the track walk this morning. Asked a lot of questions. Sat in J.R.’s car. It’s a really tight space, for sure.

What’s the fan interaction like in the pit area versus NASCAR?

It’s crazy, just how fans can walk up to your pits. We have some fans that get hot passes but pretty much everybody can go back there and stand in the pits and stand right there. Their interaction is very, very good with how the fans can get right up to the cars while they’re working on them.

Any chance of getting behind the wheel?

I sure the hell wouldn’t get behind the wheel right now. I did one of the drag race schools here and ran a high 9. I’d like to take some more classes and learn a little bit more and then maybe drive something a little bit faster but I’m far from that right now.

The question we were presented with was how many gears does a Pro Stock car have, and how do drivers shift so quickly? Brian “Lump” Self, crew chief for Chris McGaha‘s Harlow Sammons Pro Stock team helps us out with the answer. It’s still worth remembering that the average Pro Stock run is somewhere in the neighborhood of six and a half seconds.

The new national record elapsed time for Pro Stock, set by Jason Line in the first round of eliminations at the 4-Wide Nationals last weekend at zMAX Dragway. Line’s E.T. of 6.481 during Saturday’s second qualifying session was within the required 1% to serve as a backup and make the record official. Cool air temperatures and low humidity set up ideal conditions for record-setting runs at the 4-Wides.

NHRA takes Easter weekend off before returning to action April 10-12 for the 16th annual SummitRacing.com NHRA Nationals from The Strip at Las Vegas Motor Speedway. This race weekend will also include the K&N Horsepower Challenge for the stars of the Pro Stock category so don’t miss the live broadcast on Saturday night!