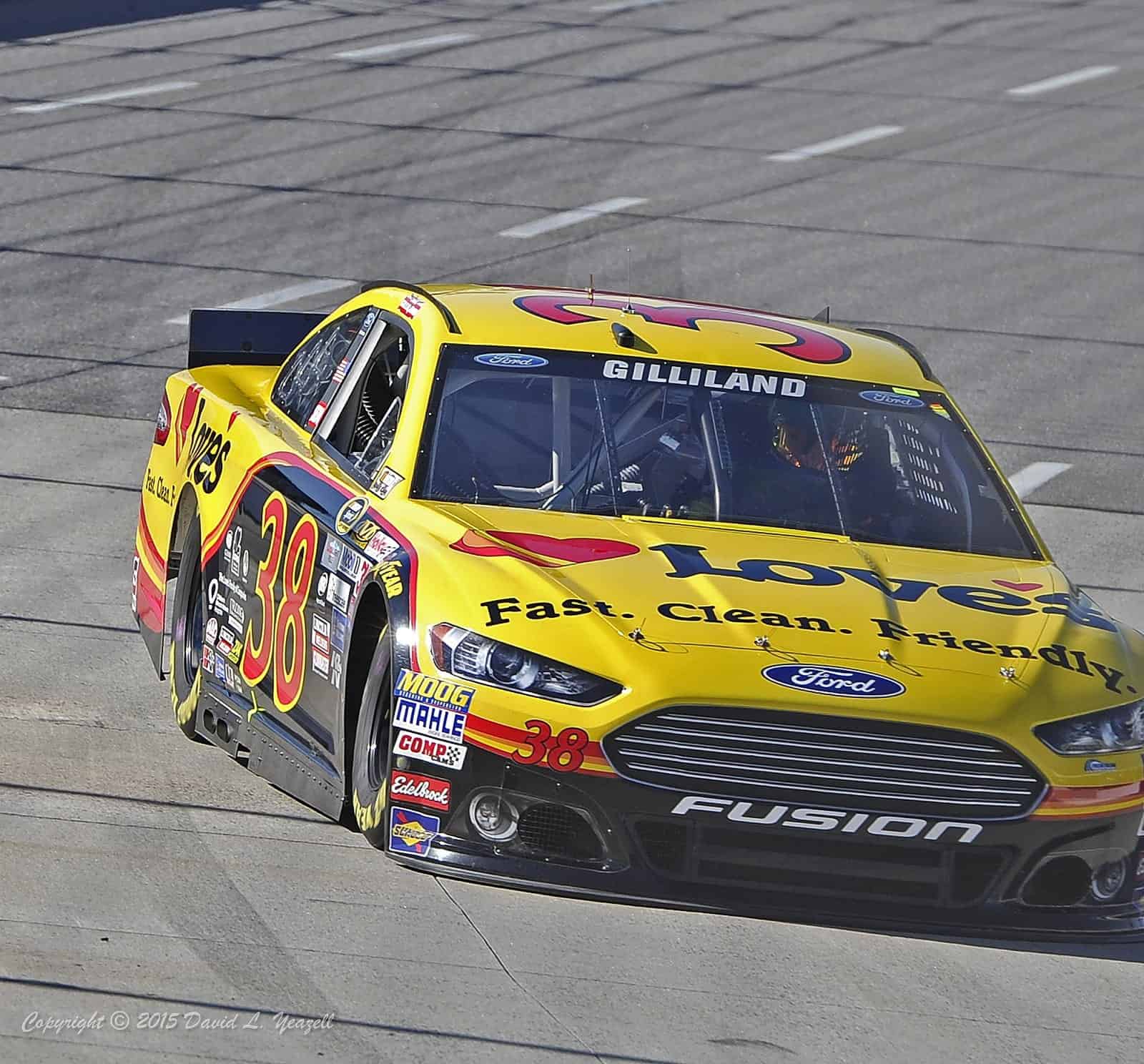 David Gilliland has driven the No. 38 Ford for Front Row Motorsports since 2010. A second-generation NASCAR driver, Gilliland is often remembered for his unlikely Xfinity Series victory at Kentucky Speedway in his unsponsored, self-owned racecar. Gilliland has become a model of consistency for his current team and has been a major part of its evolution. Gilliland sat down with Amy Henderson in Martinsville to talk about how far his team has come, changes for 2015 and bringing along the third generation of racing Gillilands.

Amy Henderson, Frontstretch: You have been with Front Row Motorsports since 2010. Talk a little about the evolution of the team and how far you have come as a group.

David Gilliland: I think the team has come a long way since I came. Bob Jenkins, our car owner, puts a lot into our team each and every year. Everyone has worked really hard to improve every year. We definitely made advances and taken steps forward every year. Our cars are newer and each year, we pick an area and try and strengthen that part of our team and the organization. We’re definitely leaps and bounds ahead of where we were when I got here and that’s something I’m proud of, too. I feel like I’ve been there and I’ve helped out over there a little bit. It’s something I’m proud of.

Henderson: Tell our readers about the challenges that you face being with a small team. The money, the resources – you have to do more with less.

Gilliland: For sure. We don’t have the resources of some of the other teams we race against. That’s just part of where we’re at. At times it gets frustrating, but, I own a race team too, for my son. Sometimes when you have the driver hat on, it’s frustrating, but when you get out and realize and see it from an owner’s point of view, what we’re able to do as a small team and what we’ve been able to achieve over the years is really good. So we definitely don’t have the resources of some of the teams we’re racing against, but we also beat a handful of those teams each and every week, it seems like. That’s gratifying in itself.

Henderson: It seems like you’ve had a solid start this year. Talk about what the team is looking forward to and the goals you set for yourselves.

Gilliland: Our goal this year – last year it was the top 30 in points – this year, it’s the top 25 in points. We feel like that’s a realistic goal. It’s going to be tough; there are a lot of good teams right there in that group that we’ll be racing against. But our engine program is solid and our pit crew program is solid. Each year we try and make those points a little better and it all helps.

Gilliland: No, it doesn’t. As much as we’d all like it to, we’re all competitive and that’s why we race, but it just takes time. Without huge unlimited resources it takes five and ten times more time it seems like.

Henderson: So, taking from that progression, what should this year look like?

Gilliland: Donnie Wingo has come over to be my crew chief this year, and he’s been an incredible addition to Front Row Motorsports and my team. You can only do things so fast. You can only try to implement the procedures that you want in place so fast. Now that he’s got a feel of our program and our operation and has seen how it runs, he’s got some things he wants to change and do. It takes time to get those things into circulation in the process of getting the cars turned around. I’m very happy with the way our season has started and I think Donnie has been a great addition to the team. I think we’re just going to keep progressing and getting better from here on out.

Henderson: Front Row Motorsports added a full schedule for the No. 35 team this year and added Cole Whitt. What does that bring to the table for the team?

Gilliland: I have a lot of respect for Cole. He’s a great young racecar driver. In this sport, like we talked about earlier, our budget and resources aren’t exactly the same as some of the top level teams we’re racing against, so any time you can have more information at the racetrack in a smaller window of time in practice, it helps. He’s worked with his crew chief, Randy [Cox], for a long time, and I think it’s been great. There have been times that I’ve gone and leaned on him and asked him questions, and there have been times when he comes and asks us. We get along really well, and he’s another great addition.

Henderson: You did have a little bit of a shakeup this year when David Ragan went over to Joe Gibbs Racing to sub for Kyle Busch. I’m sure that was a distraction, but at the same time, you get a few new faces in the car, which brings some new info to the team, right?

Gilliland: Yes. I think it’s been good. I miss David; he’s a good friend of mine and an incredible teammate. But we’ve had some fresh faces over there, and some at the last minute. It’s been kind of difficult, but the crew chief over there has done an incredible job of setting up the cars, not even always knowing who’s going to be drive it the next week. They’ve done a good job and they’re solid in points. All that stuff – feedback on our team and organization, seeing what they think about our cars and how they drive – it’s all good information for trying to get to the end result and the good of Front Row Motorsports.

Henderson: One thing about your team in the last couple of years is that you always seem to finish within one or two positions of each other. It seems like that’s a really good thing for the team… is it?

Gilliland: I think so. A lot of times, David and I fought the same things; even if our cars were set up differently, we fought the same issues. We’ve always seemed to finish and run the race right around each other. That’s good and bad. It allows us to try new things – different setups and stuff. But a lot of times we do run right together.

Henderson: It seems like that kind of consistency would show that you’re all getting the most out of your cars.

Gilliland: Yeah, I think we are. I feel like I am. And David, with him going to run Kyle’s car and having the speed that he’s had over there, I think it does a lot for everybody. Just knowing that we need to get our cars a little bit better, that’s everybody’s focus and goal each and every week.

Henderson: You mentioned earlier that your son, Todd, is racing now, and you own the race team. Talk a little about that and how it alters your perspective.

Gilliland: For years, I owned my own race team and raced for myself. To be honest with you, I’ve driven for a lot of people over the years, and getting back into the ownership role has helped me. I always feel like I’m appreciative of what we’ve got, but at times it really makes me appreciate even more what Bob Jenkins does for all of us here. He gives us the opportunity to be out here and build something, be a part of something. Owning the race team is not quite as much fun as driving, but I have a lot of fun watching my son. He’s very talented and he’s been racing since he was five. He’s done a really good job and I’m really proud of him.

Gilliland: Yeah, that is pretty cool. I think he’s got the talent to be racing in the Cup Series one day. Whether or not he gets the chance or an opportunity, we’ll have to wait and see. But he does a really good job, and it would be pretty special to have three generations of our family race in the Cup Series. That’s our goal.

It would be healthier for the sport to see Healthier Western Conference Next Generations, because, I would want them to have as strong of say as a Burton or Earnhardt.