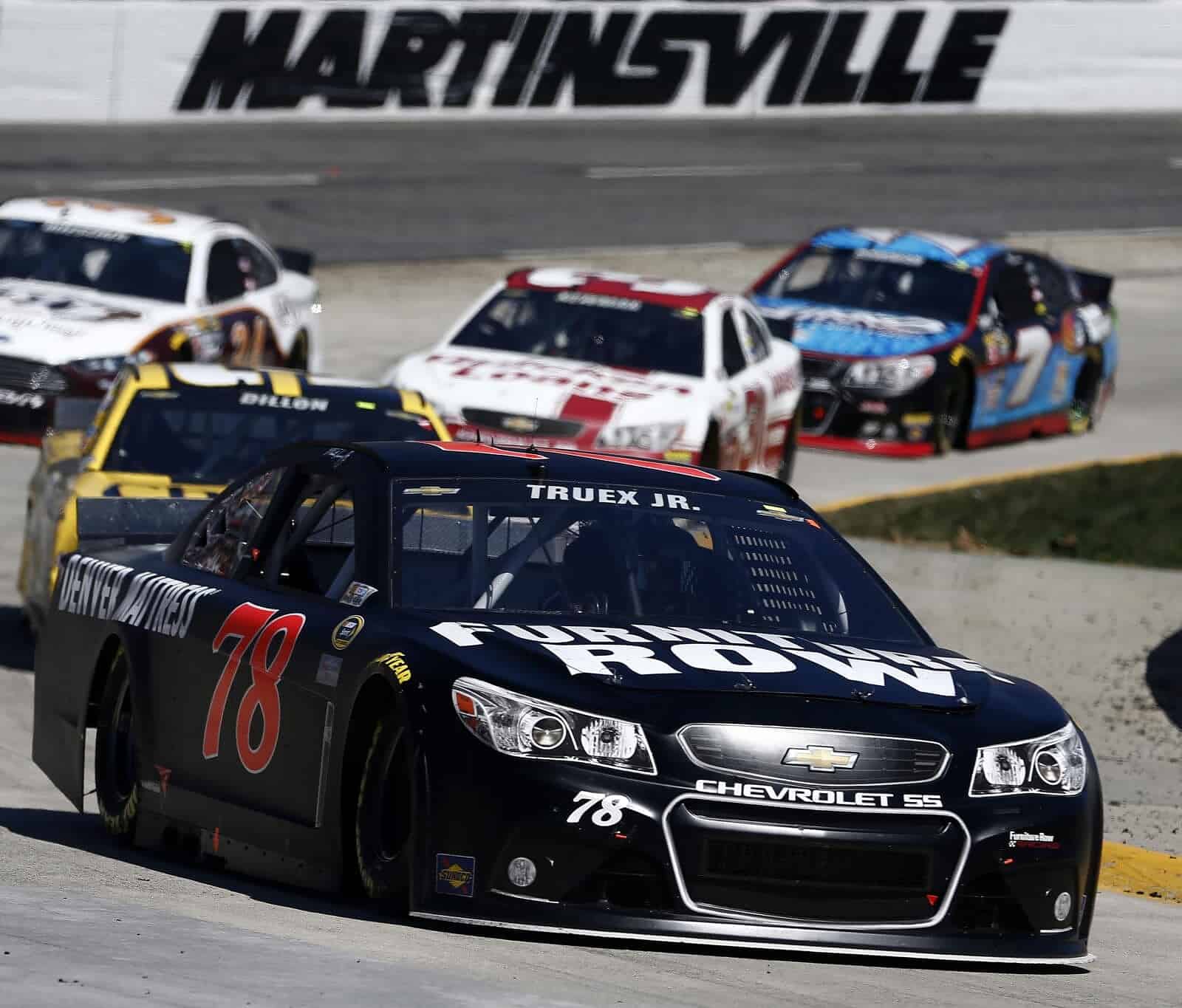 It’s an important stat to note during the off week because of so many teams off to “poor” starts. Roush Fenway Racing has been awful, for example, but Greg Biffle still sits 20th in points. That means it’s only going to take one, maybe two good runs to put him back in Chase position. Ditto for Clint Bowyer of Michael Waltrip Racing, sitting 18th and virtually invisible since the Daytona 500. MWR may be in turmoil with its No. 55 team losing Brian Vickers, but they’re also close enough to weather the storm.

Other drivers in this range you wouldn’t expect include Casey Mears, Paul Menard, Danica Patrick (who we talked about last week) and David Ragan, currently subbing for Kyle Busch. So in reality, after six races, while we’ve learned who’s good on the Cup Series circuit, everyone else is just sitting there in a clump. While we all love writing journalism copy, speculating on what’s to come, it’s hard to figure out who will stand out this year. There’s still plenty of time and any tweaks to the rules in-season could tilt the scales toward one of these fifteen teams “stuck in the muck.”

Did You Notice? How many drivers have gone through suspensions, injuries, and general off-track issues this season? Kyle Larson missing Martinsville due to a medical concern was the latest add to a list that keeps piling up.

That’s four out of the 30 or so fully-funded teams, a ratio of about 15%. You have to go back to the mid-1990s, when injuries were far more routine to see a list of problems pile up that quickly. Even then, you had maybe one driver, like Bill Elliott or Kyle Petty out for an extended period of time instead of a good portion of the garage.

The issues have also revealed what a small list of capable subs are out there. Regan Smith has now been tabbed for two different cars with his previous (albeit middling) Cup experience. Ragan, subbing in the No. 18 had to be stolen from a smaller team for Joe Gibbs Racing to grab him. Why the problems? Some of the younger talent, like Erik Jones is just not quite ready enough for Cup cars while older options, like Mike Wallace are far past their prime and not a popular choice for sponsors. Stability at the top, with no new teams breaking through the hierarchy has taken its toll as there’s no “deep bench” of drivers sitting there and in position to switch rides or move up.

Honestly, I’m not all that interested in points, especially this early in the season. Is it just me?

No, it’s not just you, JohnQ. I’m not interested in points and as Ron pointed out in his post, points don’t mean much until just before the Chase cutoff when you need to have either a win or be right in points.

For obvious reasons, since I am a Gordon fan, I want the 24 in the “chase” but other than that, I don’t find myself all that interested in NASCAR at all and that is a strange feeling for me.

Everything is meanlingless till the last “shootout” between 4 drivers, it’s about LUCK and doesn’t matter one bit what anybody did the whole season. Manipulation pure and simple any way you slice it! Many have been robbed. And who wants a one race Champ? I don’t. It could have been Newman, and I wish to God it was. Nah..Brian would not have noticed in insanity..he hasn’t yet..why should he start anytime soon!

Back when how they ran all year mattered, I never really paid attention to points until 4 or 5 races to go. Now you get people crowing about being “locked in” after one or two races. I want to enjoy a race at one of my favorite tracks with duels between my favorite competitors. Alas, I have fewer and fewer of those as time goes by, hyper-focus on points or not.

Don’t you feel there is something just plain wrong with the fact that someone can be locked into the post season after 1 race as long as they just show up for the remaining 25 races? I can’t think of any other sport where someone can know they are headed for the playoffs after the first event of the season.

jerseygirl
Reply to  Bill B

yes, I do think there is something fundamentally wrong with that idea. For me, it simply kills my interest in the racing.

I find it bothersome on the flip side, you can have the best and most of everything with a stellar season and you get locked out of the silly playoff and guys who were no where as good as you get the chance to be crowned the Champ! When their season was not anywhere near CHAMPLIKE! The history books by virture of that one win of one race does not and will not tell the truth.

Yes, maybe a 1 race champion makes some people happy (apparently Brian is ecstatic) but it doesn’t do it for me.

The Chase (now an elimination) concept might be meaningful if it didn’t dominate the entire season. It affects WHO gets coverage prior to race 27 significantly. That’s a flawed approach/scenario.

There are too many races in the season now.

Having 10 of the current 36 points races be the “Chase” is putting way too much emphasis on that portion of the season, and leaves too many out of the mix by virtue of only 16 drivers being able to advance beyond race 26. I’ll wager that statistically, NASCAR has looked at past seasons to discover that at the point in the season where this separation occurs (cream rises to the top–in this case, after 26th race), there has never been a Champion who came from below 16th to end up as Champion–I would be surprised if it’s even been outside of the Top 10 at the current separation to have made it to Champion, other than by the manipulation that ALMOST let Ryan Newman win last year. Hot a knock on Newman…he’s just doing his job, but he shouldn’t have been in the Final 4 scenario in the first place. Of course, we can look back at 2004, and I recall that the Chase was the Top 10 (or was it 12) and that has been expanded over time by virtue of NASCAR’s determination to assure certain favorite drivers are in the mix…no idea what kind of money or influence has been applied to be sure 24 & 88 could be there every year–and I like 24, I’ll admit (mostly just a Bow-Tie fan). JG has never won a Chase championship, but his stats would have been good enough for several more crowns if not for the change to the Chase…..it is what it is.

It’s not just you, see my post above. Let average finish position through the season be the determining factor, at least to the point of making the cut for top 16, for setting the stage for a Champion’s elimination (ie what is now called the Chase),

I could live without having points or wins be the driving factor for any strategy currently employed–it is certainly a faulty approach to play up race winners as “going to the Chase” by the 6th race of the season.

I remember when the points actually MEANT something.
But now, with Brian constantly playing games with his inherited “toy” , and causually changing the scores/points SEVERAL times at will,– it makes the points completely irrelevent to me.
As is the latest -“Run quick, then do it again & AGAIN” qualifying game, (SEVERAL times the quickest car of all is NOT even on the pole) – – the regular season, ( which means NOTHING anymore) – – and the latest musical chairs farce, (PLAYOFF ???) – that last year proved …. that the neither the winningest team, nor the one with the the most accumulated points are even ELIGIBLE to run for a Championship — that now means NOTHING – –
In fact – under this well thought out format (cough cough) — a driver could win the first THIRTY FIVE races, and finish SECOND in the final at Homstead– and NOT be –the “Champion” !
Let that sink in ………
No wonder Brian has made NASACR irrelevent – – Just have to wonder —-WHY ????
Was it some kind of inheritance tax situation we’re not familiar with that prompted all these destructive changes ??

I’ll differ a little with my fellow race fans who’ve already commented in that I do find the points interesting. Not that I agree with anything the little Emperor has done, but it does give some insight into performance thus far. I found the difference in points between 1st and 6th versus 6th and 20th unusual.

The way the new points system (43 points for a win and 1 point for a loss) works really shows it’s weakness when some bad luck (getting caught in someone else’s accident or a blown tire) can kill you in the points compared to the Latford sytem they used to use (175 points for a win and 34 points for a loss). The Latford system was more likely to reward the best performing team with a Championship. Instead we get gimmicks to try and keep us interested instead of giving us good racing.

If there is to be a Chase, here’s my approach:

1. No points awarded prior to start of Chase. Drivers are instead ranked by average race finish order up to Chase “cut”. A single win does NOT guarantee a Chase spot. Obviously, finishing as high as possible will improve chances of making the Chase cut. Someone finishing 2nd every week could easily have a higher finishing average than someone winning 3 races, thus the reason to dump the single win scenario. Standard tie-breakers would apply at race 26 to establish the cut point for the Top 16, if that continues to be the approach.

2. Qualifying speed does not determine order of pit selection–only grid position to start the race. Instead, finish order of previous race is used to set pit selection. Only exception might be the first race of the year–use finish order for Thursday Duels to determine pit choice, except for front row, as done now. Each “pair” by finish order in the Duels get pit choice based on previous year’s points rank between the 2 drivers.

3. Points WILL be used for the Chase – participants start with ZERO points – all even – and earn 16 points for top position down to 1 point for last (lowest finish vs others in Chase) position in each event. As rounds of elimination occur, the points earned are 16 to 5 (12 cars), then 16 to 9 (8 cars), and finally 16 to 13 (4 cars). At the end of the Chase, if there is a tie within the 4 top finishers, total wins, poles, and finally laps led are the tie-breakers. It remains to be seen if a “winner take all” final race is the best approach–I’m not a fan, personally, but it’s not my show to run.

4. Advancing to the “Final Four” requires at least ONE win through the season, or a top-4 finish in two selected/designated races during the season–I’ll leave that for smarter folks than me to decide. Indy, for example (IMO), would be one event that would be appropriate to be one of those events, but it could rotate year by year among a number of tracks.

5. All other competitors continue to use the average finish calculations to determine final season rankings.

That ought to stir things up!!!