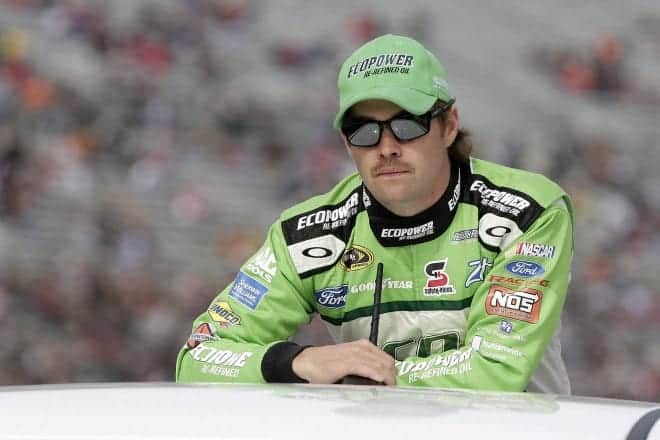 Every week Frontstrech will scour Twitter looking for some of the best tweets from your favorite drivers, NASCAR executives and media members. The tweets below are our picks from the previous week and we hope you enjoy them!

We're off this weekend. They could have pink-slipped these wack officials and borrowed our pit-road cameras. #nascar #finalfour

If you have been following some of the other sports lately, you probably have heard about the Final Four. With it being an off-weekend, many watched the championship game between Wisconsin and Duke. Many people did not like the calls being made by the refs. NASCARCasm sent this hilarious tweet, suggesting they barrow NASCAR’s pit road cameras.

Ricky Stenhouse Jr. was asked by a fan if he wanted Wisconsin or Duke to capture the NCAA title. Stenhouse responded with this tweet, saying he wanted to see Wisconsin win. However, his crew chief Nicholas Sandler, wanted to see Duke win. It is safe to say, Stenhouse ended up on the losing end.

Many drivers used the off-weekend to get away from the racetrack. However, that was not the case for Tony Stewart. Stewart spent some time during the holiday break at Attica Raceway Park. Stewart posted this selfie on Twitter, telling everyone how cold it is.

DeLana and Kevin Harvick have been sharing cute videos of their son Keelan. This one, which was posted to Instagram, is probably the cutest yet! Keelan is seen here pretending to be celebrating in victory lane from his bicycle. It is safe to say, Keelan will probably be a racecar driver when he grows up.

Dale Earnhardt Jr. and his girlfriend Amy Reimann spent some quality time together over the holiday break. This photo, of their new dog Gus, appears to be enjoying himself at the beach. Who doesn’t love going to the beach!?

What a great day for @godaddy @nyse! #GDDY pic.twitter.com/bO2wUfJiLD

Danica Patrick had some fun in New York during a GoDaddy appearance. Patrick tweeted this selfie of her wearing an interesting GoDaddy hat. This is just one of the perks of being a racecar driver.

That wraps-up this week’s edition of Tweet ‘N’ Greet! Be sure to check back here next week for some of our favorite tweets from this week coming up! If you’re on Twitter, be sure to give us a follow @Frontstretch!