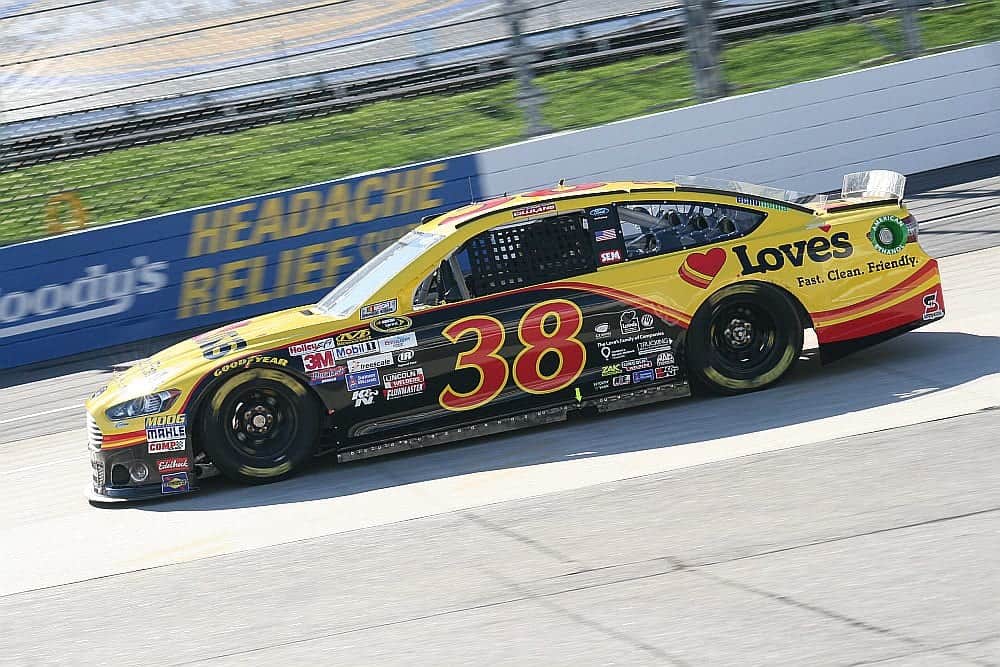 There’s a different world on the backside of the Sprint Cup garage. That’s where the sport’s smaller teams usually reside. Teams are assigned to the garage based on points, so while one side — the side where the big, powerful teams are parked — is often a circus of fans and media on top of the teams, the pace on the backside is less frenetic, and the teams have more room to work, more space to breathe.

And while it’s a point of pride to be on the other side, teams on the backside work just as hard — often with less money and fewer people — to meet their goals. Goals are different back here, too, out of necessity and economy. But make no mistake, these teams are not satisfied with mediocrity any more than the big ones are.

For now, at least, it’s the backside of the garage where you’ll find the three Front Row Motorsports teams hard at work. The team expanded from two full-time cars to three in 2015, adding a young, talented Cole Whitt to the veteran presence of David Ragan and David Gilliland. The team entered the year looking to balance that raw talent with the veterans’ knowledge.

But a week into the season, plans changed.

Ragan accepted an offer to fill in for Kyle Busch at Joe Gibbs Racing after Busch was injured in an Xfinity Series race at Daytona. The team was on board from the start, and Ragan will return to the No. 34 when Busch returns to the No. 18. In the meantime, Ragan has a chance of landing his FRM team in the Chase — should he qualify in Busch’s car, he’d still be in. In the meantime, his FRM team and teammates will get fresh input from other drivers. Chris Buescher looks like the man for the time being after Brett Moffitt was called back to Michael Waltrip Racing to fill the seat for Brian Vickers, who’s out for at least three months.

Whitt admits that the shakeup was a distraction at the beginning.

“It was probably more distracting at first, when all the craziness was happening with Ragan going to the [No.] 18,” Whitt said before practice at Martinsville Speedway two weeks ago. “Originally, that was probably the biggest distraction. We just have to focus on our own car; that’s all we can control.”

Both Whitt and Gilliland also see the positives in the situation, though. “I miss David; he’s a good friend of mine and an incredible teammate,” Gilliland said. “But we’ve had some fresh faces over there, and some at the last minute. It’s been kind of difficult, but the crew chief over there has done an incredible job of setting up the cars, not even always knowing who’s going to be drive it the next week. They’ve done a good job and they’re solid in points. All that stuff — feedback on our team and organization, seeing what they think about our cars and how they drive — it’s all good information for trying to get to the end result and the good of Front Row Motorsports.”

More information is never a bad thing, and if Ragan returns with a Chase berth secured, that’s another bonus. It’s not out of line to think that an FRM driver could make the Chase on his own; Ragan would have made it in 2013 after winning at Talladega if the current qualification rules had been in place. That win puts FRM in elite company; after all, it’s not something that most of their peers in the garage have on their resumes.

The team has talent behind the wheel, there’s no doubt about that. Ragan was a Cup winner with Roush Fenway Racing before he took over the No. 34. Gilliland is perhaps best remembered for an unlikely victory at Kentucky in the Xfinity Series when, driving an unsponsored, part-time racecar, he took the checkered flag first, beating the money teams at their own game. Whitt has had strong runs in less-than-stellar equipment as well. Buescher had a top-20 finish in his Cup debut at Fontana, a better result than the highly-touted Chase Elliott would find in his debut a week later. Mistaking small-team drivers for less talented based solely on their results in those cars is an error in judgement, and the FRM trio is a testament to just that.

About that top-20 run of Buescher’s, and Gilliland’s 11th-place result at Daytona: those numbers are very, very good. To the larger teams, they wouldn’t be good — they’d barely be acceptable — but for a small team, it’s a different matter. For one thing, there’s competition among those teams for the top spot every week. But mostly, it’s about progression.

Even the biggest teams didn’t make it overnight. Look at Hendrick Motorsports; that team nearly shut down for lack of funding early on. Without a well-timed win, the team would not exist today. Everyone has to start somewhere, and for an underfunded team, that means at the very bottom. From there, it’s about small steps.

Whitt explained: “My goals are probably a little different than my expectations. My expectation is top be in the top 30 every week and consistently running in the top 30 during the races. My goal is to be a top-25 team. Between top-30 and top 25 doesn’t really sound like a big difference, but it really is.

“It’s cool for us. I think people overlook us once you get past the top 20 or whatever, but for our teams to be able to get into the top 25, we have to outrun some pretty big teams.”

Whitt’s best finish this season is 22nd at Martinsville. Backing up what he says, Whitt finished ahead of, among others, Ryan Newman, Jimmie Johnson and Dale Earnhardt Jr. Part of that comes from staying out of trouble, something Whitt said he and his teammates have to do, especially before the green flag drops.

“I feel like we push our equipment to the max level each week and get the most out of our races,” Whitt said. “Sometimes it’s hard to leave a little bit on the table because I feel like we can’t really afford to tear equipment up. As a driver, I take on a responsibility to try and keep my cars in good shape throughout the weekend. Going to the track with a backup that’s not really quite ready to hit the track makes you leave a little bit on the table until race time.”

Improvement for a small team is methodical. From top-35 finishes, the teams work toward top 30s and then top 25s. Gilliland said that means focusing on one thing at a time. “Each year, we pick an area and try and strengthen that part of our team and the organization. We’re definitely leaps and bounds ahead of where we were when I got here and that’s something I’m proud of,” the driver explained.

“Our goal this year — last year it was the top 30 in points — this year, it’s the top 25 in points,” Gilliland said. “We feel like that’s a realistic goal. It’s going to be tough; there are a lot of good teams right there in that group that we’ll be racing against. But our engine program is solid and our pit crew program is solid. Each year we try and make those points a little better and it all helps… it just takes time. Without huge unlimited resources it takes five and 10 times more time it seems like.”

Front Row Motorsports is on the right track. It does take time, it has taken time. It’s taken half as many people as the big teams have working twice as hard. It’s taken frustration and sweat but it’s produced a steady improvement. It’s produced a win, too, proving that in the right circumstances, a talented driver will shine, no matter what his budget is. It’s produced a desire for more, for better, for excellence.

They’re parked on the backside of the garage… for now. But that’s all right. They know they belong; they’re making sure everyone else knows that too. And for now, that’s enough.