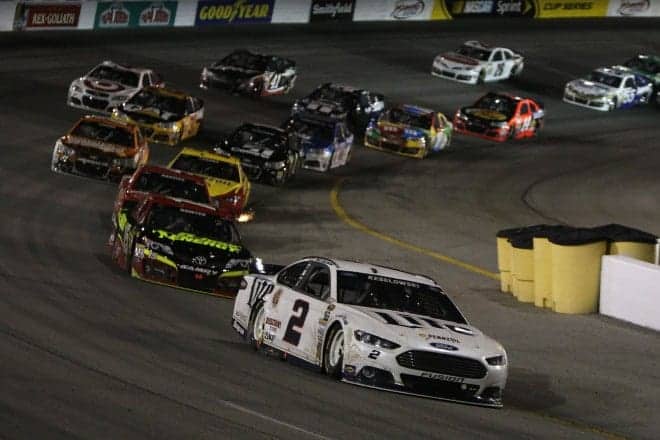 This weekend marks a first for NASCAR this season, unless you’re counting the exhibition events.

There’s racing this weekend, but no cars will take the track Sunday. Instead, the racing will be done starting tomorrow night at Texas Motor Speedway, culminating with the Sprint Cup Series event Saturday evening. It marks the first of seven such races this season for the Cup Series, not counting two exhibition events: the pre-season Sprint Unlimited and the Sprint All-Star Race next month.

These races have one other thing in common: they’re run at night, setting the cars under the lights for 400 or 500 miles. That’s important to note because oftentimes running a race at night changes the track conditions, allowing for a racing experience unlike what could happen at the same track on the same day but hours earlier. What was once a slick race track may no longer be so, and vice versa.

But let’s face it: the chances of catching a Saturday night race may be slimmer on your end. Sundays are often a day of relaxation, a time to do nothing but sit on the couch, crack open a beer and inevitably take a nap about a third of the way through. Saturdays, on the other hand, are less lazy for many, especially in the evenings – instead, it’s party time, or a date night, or whatever else. The point is you may be more likely to catch a Sunday race than a Saturday night event. And that’s fine.

That doesn’t mean you shouldn’t consider holing up for the evening on occasion to catch some NASCAR action under the lights. If you can only choose a few to watch on TV (because let’s be real, the show’s gonna be enjoyable in person no matter where you are), here are your best bets in order from least essential to most.

Many tracks on the Cup schedule have a reputation that precede it as a great under-the-lights track, generally because of tradition – for instance, Bristol Motor Speedway, where night racing has happened in late summer for decades. Kansas is a different animal, one not known as much as a circuit with the beating and banging often associated with night racing. Scratch that up to last year being the first race the track held under the lights. This race is still gaining its prestige, and it’s just not at the level of the others just yet.

This weekend’s race kicks off the night racing circuit for the season, but that’s about it. This season marks its return to a Saturday evening race after a brief foray into a Sunday event last year. Make no mistake: the racing will be solid. But as a whole, Texas does not often provide as many thrills as, say, Richmond International Raceway, so it’s tough to rank it too high. But again, points for being the first of the year.

Want to know something strange? For years, Kentucky Speedway was touted as a must-see track, mostly because of the races it put on for the Xfinity and Truck series, not to mention ARCA. Since it finally gained a date, the racing has been… well, it’s been alright, and it’s a different track on the schedule compared to the familiarity of the Cup season the last few years. But Kentucky has yet to provide that prime, unforgettable event. You’re better off watching the lower series races on TV if you have to choose. Great facility, though, especially now that it got the traffic situation figured out.

There’s one thing that sets Charlotte’s night race apart from Richmond’s first, but more on that shortly. Richmond is a track so known for its races after dark that both of them happen on Saturday evening, and it’s tough to go wrong with the first date. You’re going to get the first under-the-lights short track experience of the season, and with warmer temperatures to boot – a recipe, certainly, for intrigue.

The seventh and final night race of the season is also the only one to take place during the Chase. Given the fireworks of last season’s 10-race finale, it’s hard to imagine this year’s October race being anything less than captivating. Without the Chase? Probably down a few pegs and similar to Texas, but that’s where we’re at for now.

Long thought of as the mecca of all night races, the one that immediately comes to mind when you think of Saturday night NASCAR racing – especially of the short track variety. Bristol’s second race has and may always be some of the best racing of the season and certainly among the most hyped, something that will happen even if there’s a dud or two mixed in (though obviously too many in a row will spoil things after a while). Expect flaring tempers and drivers knocking others out of the way – all for glory in one of the toughest-to-win races of the year.

Once again, the Chase effect reigns supreme. Not that this race is usually a snoozefest; generally, it’s one of the better Saturday events along with Bristol the previous month. Richmond’s second race comes out on top for one simple reason: it’s the final race before the Chase begins, meaning the usual racing has the added intrigue of seeing if a winless driver can knock his or her way in at the last second or to find out who grabs the coveted final spots for those without wins. It’s never not an exciting and thoroughly entertaining evening of short-track racing. Don’t miss it.