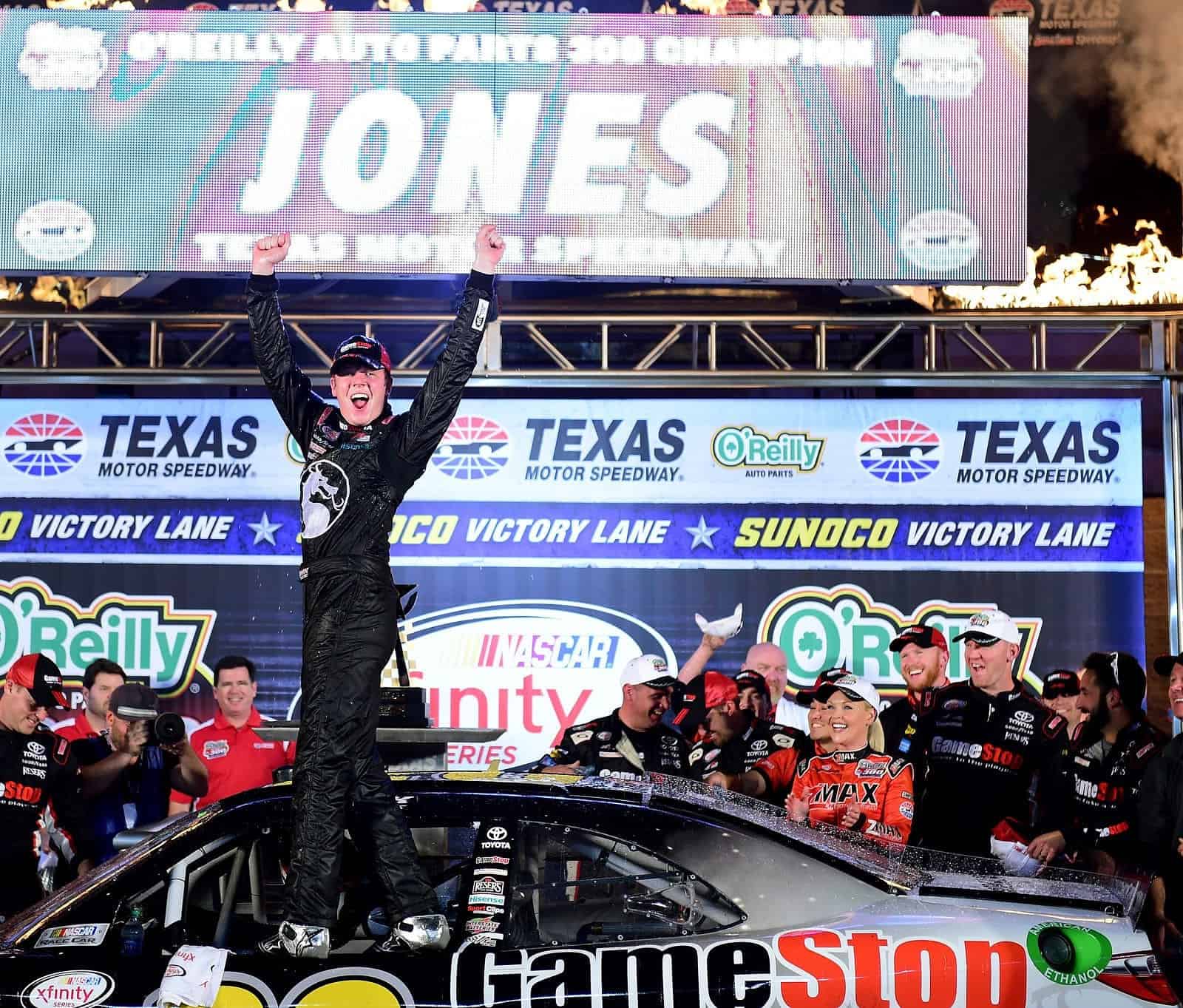 Jones, 18, held off Keselowski on a restart on lap 175 of the scheduled 200 around TMS’s high-banked 1.5-mile quad-oval for a margin of victory of 1.624 seconds in the first night race of the season. Jones’s first series win came in his ninth start. In the process, Jones became the second-youngest series winner at TMS at 18 years, 10 months, 11 days — a record set last year by Chase Elliott at 18 years, four months and seven days when he scored his first series victory in this event.

“This is surreal. That confidence is something I never doubted in myself,” said Jones, who shared the Victory Lane celebration with crew chief Michael Wheeler. “This is just amazing. We beat Cup guys tonight! Just a really cool day and something I’m really proud of not only for myself but everybody at Joe Gibbs Racing. It’s a great feeling knowing you had to work for it, that it was not just handed to you.”

Jones took the lead for good from Earnhardt on lap 151 and paced the final 50 circuits. Jones led six times for a race-high 79 laps, 23 more than Keselowski, who started from the rear of the field because of “unapproved adjustments.” Prior to taking the lead, Jones ran up to the back of Earnhardt’s rear bumper and gave him a warning tap.

“That was fun and frustrating,” Jones said. “I knew what he was doing. It was hard racing, two drivers giving 100%. I learned a lot from him. He definitely raced us hard and we raced him hard. At the end of the day we got to race against Dale Earnhardt Jr., a guy I’ve watched forever on TV. He’s a great racecar driver and has a great team and to beat him is really, really cool. Man, what a battle. It was fun for me and I hope just as much fun to watch.”

Keselowski, meanwhile, sounded the horn for NASCAR’s latest youth movement. “Erik had a great car and did a great job,” Keselowski said. “We raced side-by-side for about two laps but eventually he cleared me, so that was good racing.

“It was good side-by-side racing and we ran wide-open there, and that’s always cool when you’re running wide-open and side-by-side. It was a matter of who was going to lift first and nobody lifted. We came up a bit short. We were pretty strong at times… got a little damage on that last pit stop cycle, but who knows? Just up-and-down and barley missed it at the end.”

Keselowski said he really didn’t consider the fact that Jones, a fellow-Michigander, celebrated his high school graduation ceremony at TMS last year so he could compete in that NCWTS event.

“We’re all racing and racing’s a very selfish sport,” said Keselowski, who scored his 11th top-10 result in 15 races at TMS. “I’ve watched him race in the Truck Series and he does a great job. He’s right there where that ‘youth movement’ demands you to be successful. This is certainly a notch in his belt and I’m happy for him.

“This is definitely not a good time to sit out of a car. You see this where it seems no one new is coming up and then where everyone new is coming up. It seems to be changing very rapidly in this last year or so. It’s a bad time to get hurt because there’s plenty of youth in this sport. That’s part of it. I don’t want to get out of the seat because I love racing — and I don’t know how to make money doing anything else.”

Keselowski, driver of the No. 22 Discount Tire Ford Mustang fielded by Team Penske, overtook Earnhardt and his No. 88 Goody’s Chevrolet Camaro on lap 167. Keselowski’s last best shot to beat Jones was set up after series veteran Brendan Gaughan and Cale Conley crashed exiting turn 2 after Conley’s car blew a right-front tire. But Jones held his ground on the restart against Keselowski, the 2012 NSCS champion.

Regan Smith finished fourth in the No. 7 TaxSlayer.com Chevrolet, with Austin Dillon fifth in the No. 33 Ruud Chevrolet. The top rookie finisher was Darrell Wallace Jr., who placed sixth in the No. 6 AdvoCare Ford after starting eighth and running as high as second.

“Good sixth-place finish, I think it’s the best for me with Roush Fenway,” Wallace said. “Exciting night for us. I could not go on the bottom; I hated the bottom. Every time I got on the bottom I wasted like eight years down there. It never helps when you’re trapped on the bottom. But we’re showing progression each and every week. Our time will come soon. I’m excited for Bristol, Richmond — those are good tracks for me.”

Team owner Joe Gibbs acknowledged that Jones is on the “fast track” to an eventual Cup ride. “Erik has great family support and got everybody around him and carries himself well,” Gibbs said. “Very talented. I had to call Kyle [Busch] and give him credit (for discovering Jones). We’re really proud of him. I think he won his first Truck race in his fifth race. The big thing is tonight he beat some good people, good cars up front and really quality stuff. We’re proud of him and he should be proud of himself.”

Ty Dillon, who finished 12th, has a two-point lead over Chris Buescher (219-217) in the drivers’ championship, with reigning series champ Elliott third, 11 points behind Dillon.