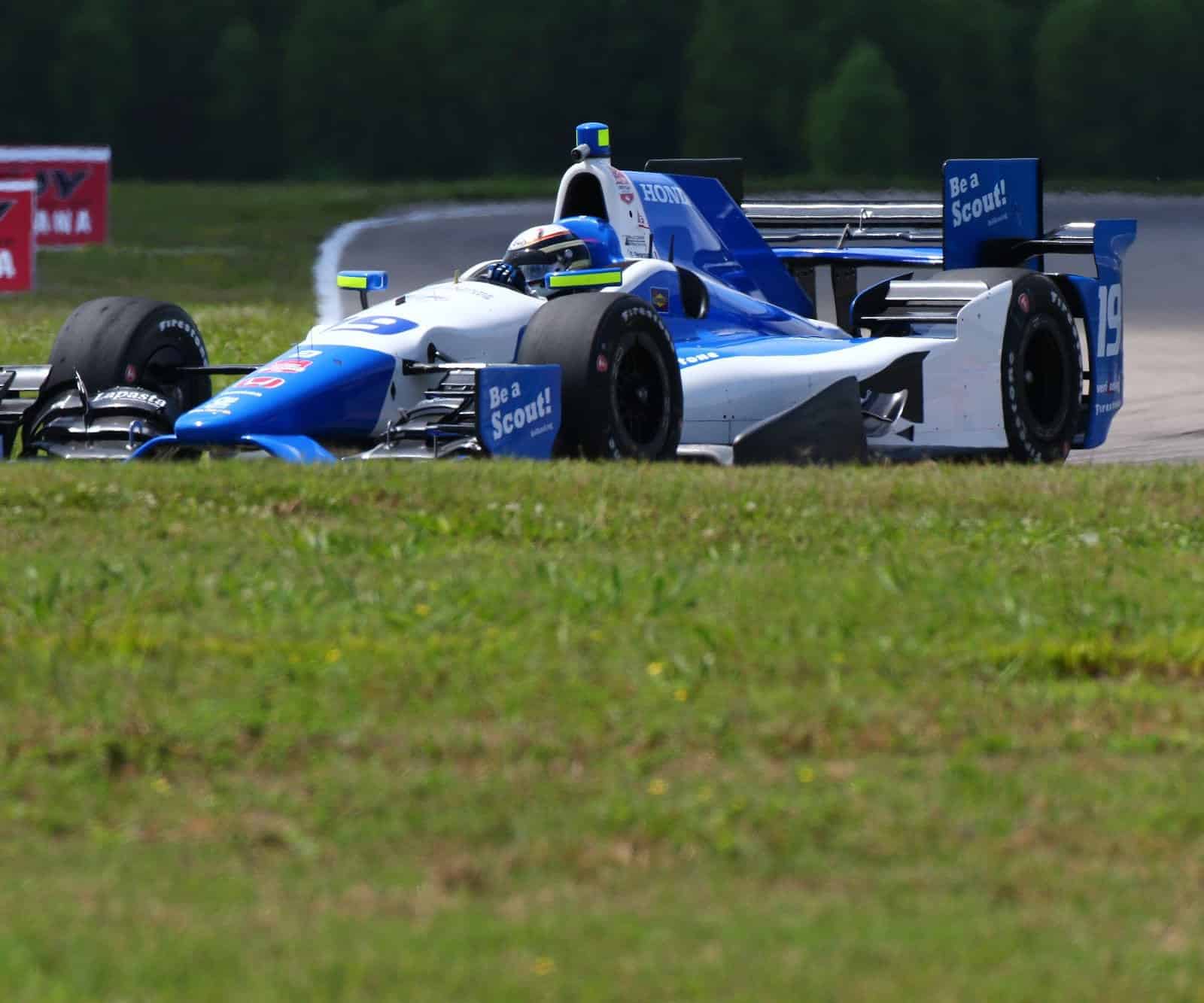 The Verizon IndyCar Series heads to a new venue this week in NOLA Motorsports Park. New venues can mean a lot of unknowns, but teams this weekend can go in knowing that the tires should not be one of them. A quick talk with the powers that be tells us why that side of the series is so smooth. Dale Harrigle, chief engineer and manager of race tire development for Bridgestone Motorsports, makers of the Firestone tires the IndyCar Series uses for every race, details the process that goes into developing fresh rubber for a new track as well as explaining how the aero kits introduced this season fit into that puzzle.

INDYCAR laid out a long-term plan for the series that spans roughly the next 10 years, so Harrigle also talks about Firestone’s view on the direction that plan will take American open-wheel racing.

Toni Montgomery, Frontstretch: What goes into developing tires for a new track? Do you use similar tracks as a baseline or do you go by track measurements and track surfaces as starting points?

Dale Harrigle: Actually, a combination of both. What starts our development process is once we have a track map from either the facility itself or INDYCAR, we then go ahead, take a look at that map and make some very general estimations of whether it’s a road course or a street course, for example. We look at some corner radius information, look at the length of the straightaways. We can get a pretty good idea of what the corner speeds are going to be, what the speeds of the cars on the straights are going to be and that gives us an idea of what kind of tire we’re going to use, whether it be a road-course tire or a street-course tire. Once we’ve gotten to that point, then we’ll rely on INDYCAR and the teams that do some much more advanced circuit simulation that can give us an idea of exact corner speeds, exact speeds down the straightaways, lap average speeds, etc. Once we do that, we compare that racetrack to where we’re already running and kind of go from there. In the case of New Orleans, everything we’ve looked at has shown us that the NOLA racetrack is very similar to the racetrack at Barber Motorsports Park – we’re actually taking the same primary and alternate tires to NOLA that we use at Barber Motorsports Park.

Montgomery: My next question was about the two different sets of tires needed for each race. Does that add an extra challenge, given that you have to design two sets of tires for a racetrack?

Harrigle: Absolutely. In some ways, it’s hard enough to design just one tire to get it right at a brand new racetrack, but doing two is much more of a challenge. We design the primary tire for long life and the primary tire design is always a bit conservative. We want to make sure it provides good grip and good consistency over a fuel stint, whereas the alternate tire, the tire that’s designed to be a bit quicker is much less conservative. It’s designed to go off as the car burns off the fuel and designed to give faster initial lap times but go off more over a stint. It is a challenge for us to get both tires right at a new venue. In this particular case, we’re bringing the primary and alternate both from Barber Motorsports Park. We feel the tracks are very similar but we won’t know for sure how that alternate behaves until we get a chance to get this first race under our belt. As you likely know, we do not allow alternate tires to be used for testing and that is to make sure that no team has an advantage when it comes to understanding the alternate, but the downside of that is we haven’t had an opportunity to test it ourselves. It’s a little bit of an unknown for everyone.

Montgomery: They also have the new aero kits this year. What effect, if any, did that have on the tire development process for the new track?

Harrigle: We worked very closely with INDYCAR, with Honda, and with Chevrolet on the aero kits, what the simulation results of the aero kit performance would be. We shared data with Honda and Chevrolet. They allowed us to attend their aero kit testing, so we were an integral part of their aero kit development. From this particular New Orleans perspective, the aero kit really didn’t factor in that much with the tire design for the new racetrack. We’ve already had an opportunity to run at Barber Motorsports Park with the open test using the new aero kits so we know how the tire responds with the aero kit and we expect to see that same performance in New Orleans.

Montgomery: Also on the subject of the aero kits, for the rest of the season and for the other tracks, I don’t know if this is the approach you take, but if you use one year’s compound as a baseline and tweak from there for the following year, what effect do the new aero kits have on that approach?

Harrigle: That is the approach we use. We very much are committed to a culture of design and innovation and we’re always trying to make tweaks to the current tires. We never particularly make huge changes. We’re always trying to work with the tires, the knowns, and make small changes, make small improvements. The aero kits in that process have led us in a certain design direction for a lot of the tires. But when it comes to the road- and street-course tires, at least initially in the season, when we worked with Honda, when we worked with Chevrolet, and with the IndyCar Series we came to the determination that the tire we used last year had good performance with the aero kits. So we decided to leave the tires the same, the specifications the same, and that allowed Honda and Chevrolet to target a known tire so they weren’t trying to design to an unknown tire in the context of designing their new kit. They had a known tire, they knew what they needed to improve to improve the performance of the vehicle. It seemed to work pretty well at St. Petersburg. I think we’ll see it work pretty well through the road and street course portion of the season. On the ovals, with the higher loads and higher speeds expected by the aero kits, we did make defined changes to the tire to accommodate those higher loads and higher speeds. The first time we’ll see that will be at Indianapolis at the open test the first weekend in May.

Montgomery: It hadn’t occurred to me that they designed the cars to you rather than the other way around.

Harrigle: With the timing and the way that the kits were developed, that was really the best way to do it. They can design the cars and then we can adapt going forward.

Montgomery: Switching directions a bit here, ultimately your goal as a company is to sell tires to the general public. How does what you do on the racetrack translate into what you sell in the showroom?

Harrigle: Firestone has a long history with the IndyCar Series dating all the way back to the very first Indianapolis 500 in 1911. The way that modern day race tires translate into the tires on the street is through the fundamental materials that the tires use. The same material that we might use at Indianapolis to make sure that we don’t generate too much heat in our tire could be useful to a truck tire rolling down the highway at 75 mph on a 100-degree day. It’s the fundamental materials that go into the development of the tire, places where the technology transfer occurs from racing to passenger and truck and all the products that Firestone makes.

Montgomery: One final question. INDYCAR and Firestone, as you noted, have been longtime partners. There’s some exciting stuff going on as far as INDYCAR’s plans for the future over the next ten years or so. What’s your take on how Firestone feels about the direction the series is going?

Harrigle: We’re very happy with our partnership with INDYCAR. As you say, there’s a lot of exciting things coming for INDYCAR. We’ve been back in Indy car racing now since 1995, so this is our 21st season since we’ve been back. We’ve been with the Indy Racing League from the day they started and through their transformation to INDYCAR. We have the 100th Indianapolis 500 coming next year, which there’s going to be a lot of buzz, a lot of activity about. Of course we can’t forget about the 99th Indianapolis 500 this year, which we’re also working very closely with. We’re very excited about our partnership with INDYCAR. We’re looking forward to good things coming in the future.