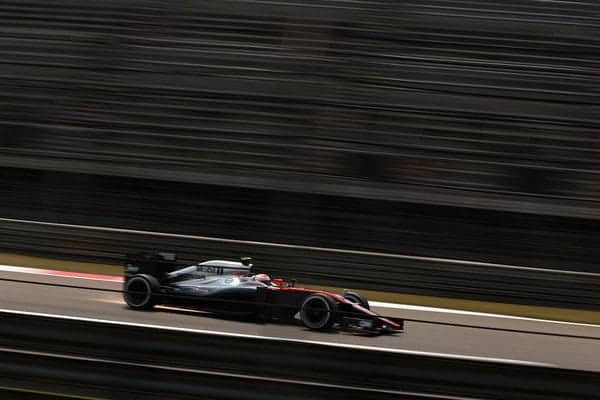 Formula 1 takes to the Shanghai International Circuit this weekend. The first two practices are history with Lewis Hamilton displaying the form that has been typical of him, and Mercedes, for the past year. But rather than his teammate nipping at his heels, Kimi Raikkonen demonstrated that Ferrari just might have pace this year, something further proved by the fact that Sebastian Vettel held fast in fourth. Nico Rosberg ended the second practice in fifth, which must feel like a confusing position for him.

Though the season is just two races old, it looks like the fight is going to be between Mercedes and Ferrari, with Williams and Red Bull positioned to capitalize should either of those teams make mistakes. It should be noted that RB’s Daniel Ricciardo finished the second practice in third, breaking up the monopoly at the front. The win that Ferrari seemingly stole in Malaysia roused Mercedes from their lofty perch of ruling the sport and now has the Silver Arrow playing both offense and defense.

Hamilton and Rosberg both came out with comments that sounded like they were from Star Wars over the past two weeks, claiming that they must strike back. If that’s the case, it’s tough to know who exactly is the empire between Mercedes and Ferrari. Maybe it’s empire against empire.

When the Shanghai track opened in 2004, it was the most expensive one on the schedule. Rubens Barrichello won the inaugural event, with the Chinese Grand Prix appearing on the schedule ever since. The track is nearly 3.4 miles in length and features 16 turns, with the most notable being turn 14, which is nearly a hairpin after a long straight. Hamilton won last year’s race. One interesting aspect of the state of the sport is that Michael Schumacher held the track record at 1:32.2, but the current cars are hitting around 1:40. That’s an indication that the sport’s desire to slow the cars has worked, but seems counterintuitive to the concept of racing.

nice report. Good to see that you touched on a lot of the issues going on at the Chinese GP. I suppose the question on most peoples mind is how close to Mercedes is Ferrari? And despite the constant complaining from Red Bull’s owner they seem to have made huge strides in closing the gap as well.
Should be an interesting season.