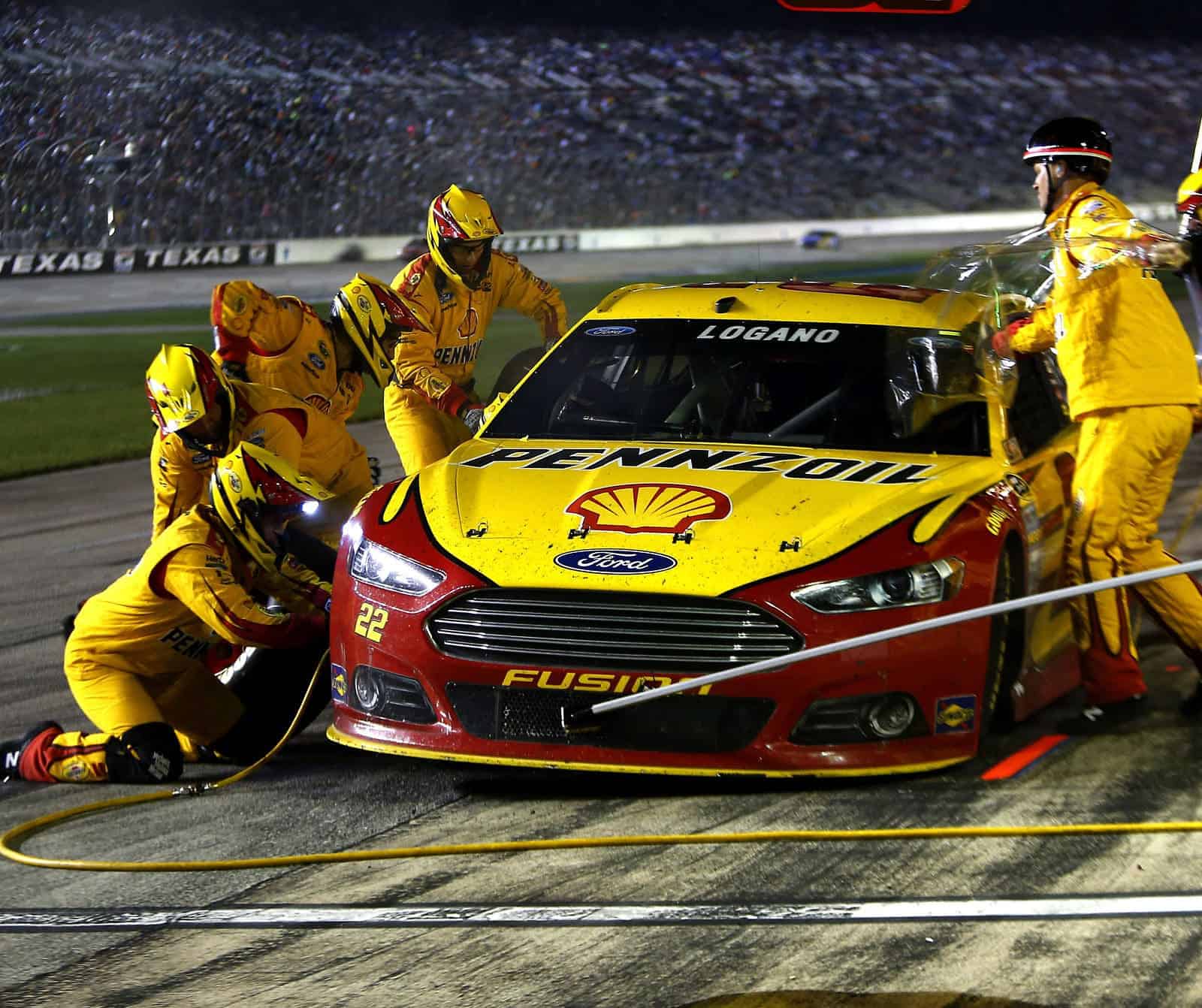 The last time the NASCAR Sprint Cup Series was in Texas, the post-race conversation was all about temper tantrums and post-race pit road brawls. Brad Keselowski vs. Jeff Gordon is one of the most recognizable stories from 2014.

And as the laps wound down during Saturday night’s event, I thought it would be the same story… just with different players.

With around 20 laps to go, the field was just a lap into a restart and a few cars had opted to take only two tires on the last restart. Most of the key players — like Joey Logano, Kevin Harvick and Jimmie Johnson — opted to take four. That meant winding their way through the gamblers (Jamie McMurray, Gordon and Martin Truex Jr.) as well as trying to fight each other for track position.

As they worked towards the front of the field, Logano and Harvick found themselves racing for the same piece of the racetrack. Logano was just ahead of Harvick in third. As they raced into turn 1, Logano blocked Harvick as Harvick attempted to make for a run on the bottom. Harvick got into Logano’s left rear, Logano shot up the racetrack, and lost several positions, falling back as far as ninth.

Logano would eventually work his way back up to fourth and Harvick had to settle for second-place to Johnson at the end.

Considering the history of these two — with a confrontation as recent as the Sprint Unlimited earlier this season — I expected Logano to fly off the handle. The contact took away what was at least the opportunity for the victory while the person who made the initial contact was up front racing for the win.

Instead, Logano responded rather mildly.

“We’re racing to the end of the race and I expect to get raced the way I race people and I would do the same thing, so it’s not a surprise there,” said Logano. “I felt like I had to guard that position. I felt like if he got by me there I wouldn’t have the opportunity to get back by him and I felt like I would have lost the race that way. We’re all just racing for wins. We’ve got nothing to lose, so I felt like I made that move thinking, ‘Hey, I’ve got to win this race and do what I’ve got to do to win it.’”

Maybe I shouldn’t have been as surprised as I was, but it wasn’t as if Logano and Harvick couldn’t individually have their own tempers, let alone when they’re racing against one another. Maybe it’s because both of them have at least one win each, putting them both in the Chase later this year with still a lot of racing left in the regular season. With that being the case, there isn’t the desperation for either of them to get to Victory Lane. Any other wins they accumulate before the cutoff point are just bonuses they can add towards the points reset.

Maybe Logano’s own assessment of the situation was just brutally honest. He absolutely would have done the same thing in that situation. The question then is whether or not Harvick wound have responded in the same manner. I can’t help but think had the situation been reversed, Harvick would have been in Logano’s face at the end.

Of course, I thought that Logano would be much angrier with Harvick and that wasn’t the case either.

For once, though, Harvick was actually in agreement with Logano over what happened and why:

“Like the No. 22 (Logano), you knock them out of the way and that’s the chance you take when you block.”

So Logano threw a block, Harvick had a run, stayed on the gas, and took the position. It’s legitimately that simple.

I can’t help but believe that’s going to come back around for Harvick later in the season, especially considering that the No. 4 and No. 22 teams have both been strong all season. And I’ll be curious to see if the tone is as forgiving and borderline cordial as it was this time around.

Regardless, I’ll admit I’m not really a big fan of drivers moving each other out of the way. It doesn’t really take a lot of talent to drive straight through someone.

But if both drivers agree on what happened and who was at fault, who am I to argue? And as much as I’d love to think that every post-race will have more focus on the racing side of things rather than a pit road brawl, I also know that racing just wouldn’t be racing without a good temper tantrum.

Still… it was nice while it lasted.

…Logano handled it well and I suspect Logano knowing the Harvick temper tantrum dance at this point is in the position to say “screw it”. Harvick ran his mouth as usual, a common occurrence if the minions are not kissing his ring. Lets see if Kevin can walk the talk when somebody isn’t so understanding, whether it is Logano or not. Harvicks history has shown time and time again he will act the fool regardless of his obvious hypocrisy and will find some lame excuse for his bad behavior. A leopard does not change his spots, watched this garbage with him for 14 years. Ugh.

..and I guess I have to ask and have been asking why is it when a Penske driver “blocks” it is a big deal to the Chevy crowd, but when a Chevy driver does it..well it is just “good racing” and “rubbing is racing” blah, blah, blah.
I don’t mind it and think it has to be part of the overall sport, but to claim when one driver does it (causing no dustup like Stewart at Dega) it is o.k. and another does it…well it is a topic of discussion. Guess it sells….

I’m a Chevy guy but I don’t care if a Chev blocks or gets punted. It’s more the personality of the drivers when something like that happens that makes it interesting. Kasey Kahne doesn’t scare too many people so he gets leaned on. Trying that with Tony gets a different result.

I’m just glad they were able to do some passing at Texas rather than watching an aero-push special presentation. ;)

they both have wins.
neither driver takes much crap.
neither is afraid to turn a car.
one is a bit more (shall we say) underhanded than the other.
the other a bit more obvious.
bristol is next.
at least a real rivalry would spice this train wreck of a season up.

Shm! Typical Happy hypocrisy! It’s a “racing deal” if HE nerfs someone …but if HE blocks & someone nerfs him, he huffs & puffs up his pigeon chest & back pushes like a 3rd grad school gurl! What a shame! Imo, champions owe the sport much more dignity & professionalism. Imo he is an embarrassment! The kid (Joey) handled it much better than the Champ. Pfft!

I agree, when he won the ONE RACE TO BE CHAMP TROPHY..I was very saddened that this man was going down in the history books as a “Champ” with the likes of some awesome drivers…we will know the real story..but many won’t, wanting a quick stat. Hell most don’t even verify what they are posting as an article.. so you can imagine what greatness they will project for this fool. He is truly an embarrassment.