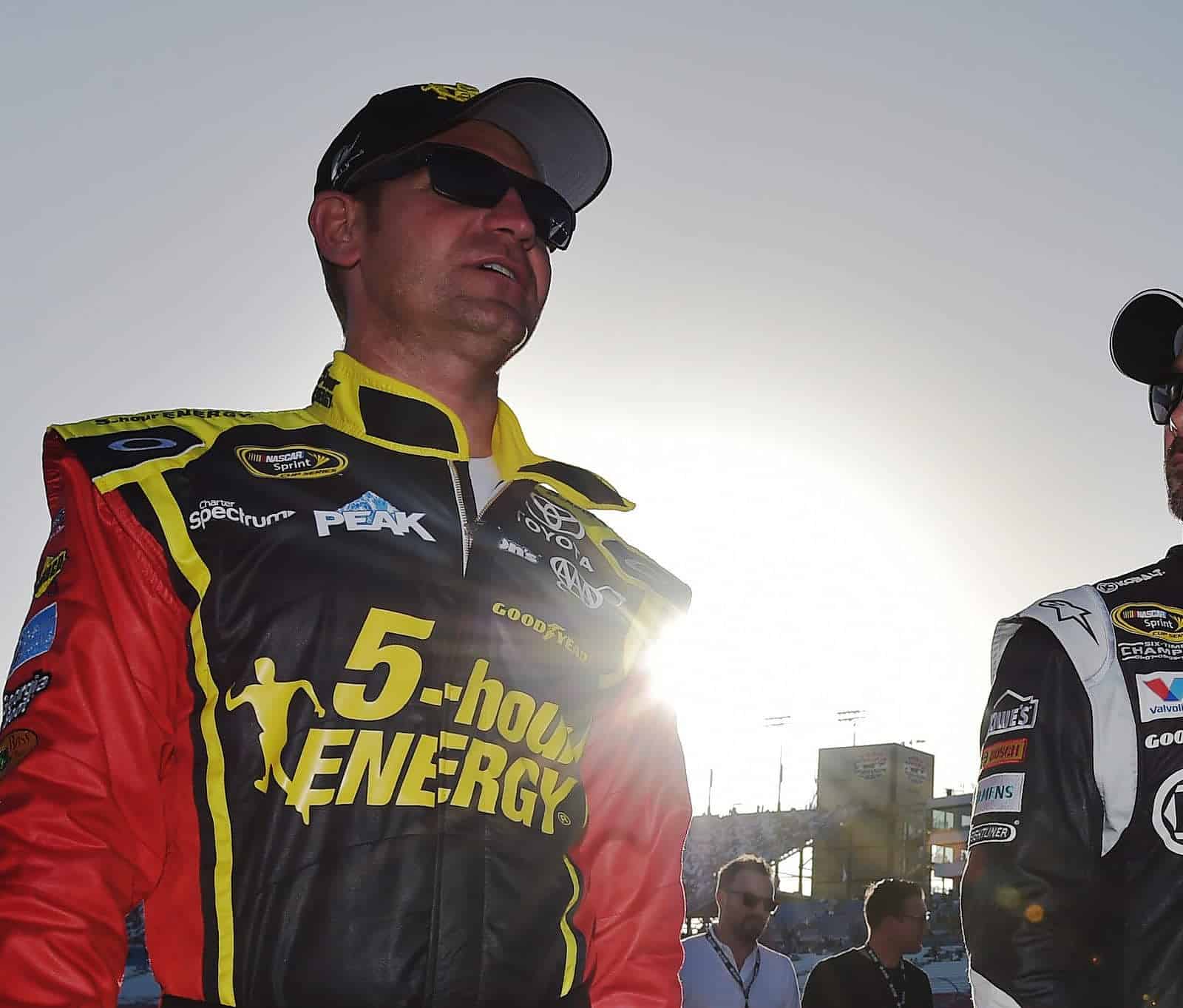 Heading into 2015, each Sprint Cup Series team laid out their plans and performance  goals for the upcoming season and no one ever said, “we’re gonna suck.” No matter what level they rank in the performance pecking order, the picture was always bright, the flowers were blooming and rainbows filled the sky. Sadly, in order to have rainbows, there has to be rain and, aside from the season-opener at Daytona International Speedway, there’s been nothing but a deluge at Michael Waltrip Racing.

The team had hoped they could shake the bad luck it has had for going on three years. Brian Vickers would make his return to the No. 55 Aaron’s Dream Machine and new dad, Clint Bowyer, was full of life and lightheartedness just eight weeks ago.

Now, to quote Bowyer, “We’re so screwed up it ain’t even funny. This is embarrassing.”

Those were just some of the comments he made during Saturday’s Duck Commander 500 at Texas Motor Speedway as he explained to his crew chief, Brian Pattie, just how bad his car was running. In fact, he was running so bad that, early in the race, the No. 51 of Justin Allgaier knocked him out of the way.

At one point, the radio chatter between the spotter, Pattie and Bowyer was so heated it should have had an Adult Content warning. But even at his worst, Bowyer’s wit hits the mark when his performance falls short.

When Pattie told Bowyer the leader was “about 15 in front of us” and that Bowyer was running him down to get a lap back, Bowyer fired back, “Well, we can’t see that mother—-er.”

The conversation was indicative of Bowyer’s season overall. There are seven races in the books and it can’t just be a “Toyota thing.” The Toyotas at Joe Gibbs Racing seem to be improving with Carl Edwards picking up his first top 10 of the season. His teammate Denny Hamlin finished 11th and fill-in driver David Ragan brought the No. 18 home in 13th. Matt Kenseth finished one spot behind Bowyer and he had heavy damage on the right side of the car.

So, you can pretty much take that it’s a “Toyota thing” and toss it out the window.

Adding insult to injury, NASCAR took Bowyer’s car back to the R&D Center in Concord, N.C. for a thorough shakedown. There was nothing nefarious or sinister intimated – the No. 15 was truly the random car picked. Damn, the luck. However, some joked that maybe NASCAR could figure out why they are running so bad.

This is Bowyer’s 10th full season in the NASCAR Sprint Cup Series and back in January he was very candid that this was an important year for him. He knew going into 2015 that he and the team needed to perform well, especially after things fell apart in 2014.

Whatever the problem, it’s far enough down the road that the entire organization needs to worry. Luckily, for Bowyer, the silver lining to the dark cloud hanging over him is that, under NASCAR’s new championship format, if he can pull through for a win he’ll make it to the Chase for the Championship. So there’s still hope, no matter how bleak it might appear at the moment.

..sounds like some serious changes are in order…too bad.

I am still betting that twenty years from now the thing most people will remember about him is his intentional spin at Richmond trying to “fix” the chase.

russ
Reply to  Bill B

Its a pretty safe bet that his career is defined by his part in that event Much like Nelson Piquet Jr. is defined by Singaore. Piquet’s career never recovered. Will Bowyer have the chance to move to a better team? Doubtful.

If Bowyer had owned up to his involvement in the scheme, then most of the stigma now would rest on the MWR team itself. He wouldn’t even have had to apologize or be repentant in any way. But instead he tried to get cute with it and play his own version of the Bill Clinton “definition of is” game. And so, as you two say, he’ll be known for this, with honorable mention going to the 2007 Daytona white flag flips.

Poor Clint, karma is a real kick in the A$$ isn’t it!!! The only thing that could make it sweeter is if Toy-Yoda pulled out from MWR and Boy-Your a dumb-A got to ride 3rd tier equipment like Mr Truex has and try to come back respectable.

I’m amazed that so many articles are being written about Eric Jones could drive for MWR. What kind of a real nascar writer dreams stuff like that up ! What in the world could that kid learn driving junk cars ! Gibb’s has cars sitting around not in use that Eric can run for 7 races out of JGR and learn something with a good car.
Karma sure has and continues to bite Bowyer, he deserves every bit of it for being a liar. MWR is going to have sponsor problems real soon at this rate.

I think all that needs to be said about Bowyer can be gleaned from his actions after the “spingate” issue. If he wasn’t a part of it, or disagreed with it, he could have left. Surely that would have been grounds to break any contract. Instead he choose to stay, and of course is there today. So no sympathy here for Mr. Bowyer, he’s getting what he deserves.

The only way MWR keeps their sponsor is the fact Mikey is calling some of the camera shots. The other night they kept the in-car camera on the #15 for over 20 sec. and he was sitting in the pits 3 laps down, running in 33rd place.

Oh, no! I just can’t believe that Bowyer and his car owner cheated. The next thing you’ll try to tell me is that drivers and owners have been cheating since NASCAR’s inception and that the Holy Sanctioning Body constantly cheats us through constant rules changes and even in race manipulation. Swim in the cesspool that is NASCAR and it is rather difficult not to come out smelling like sh!t.