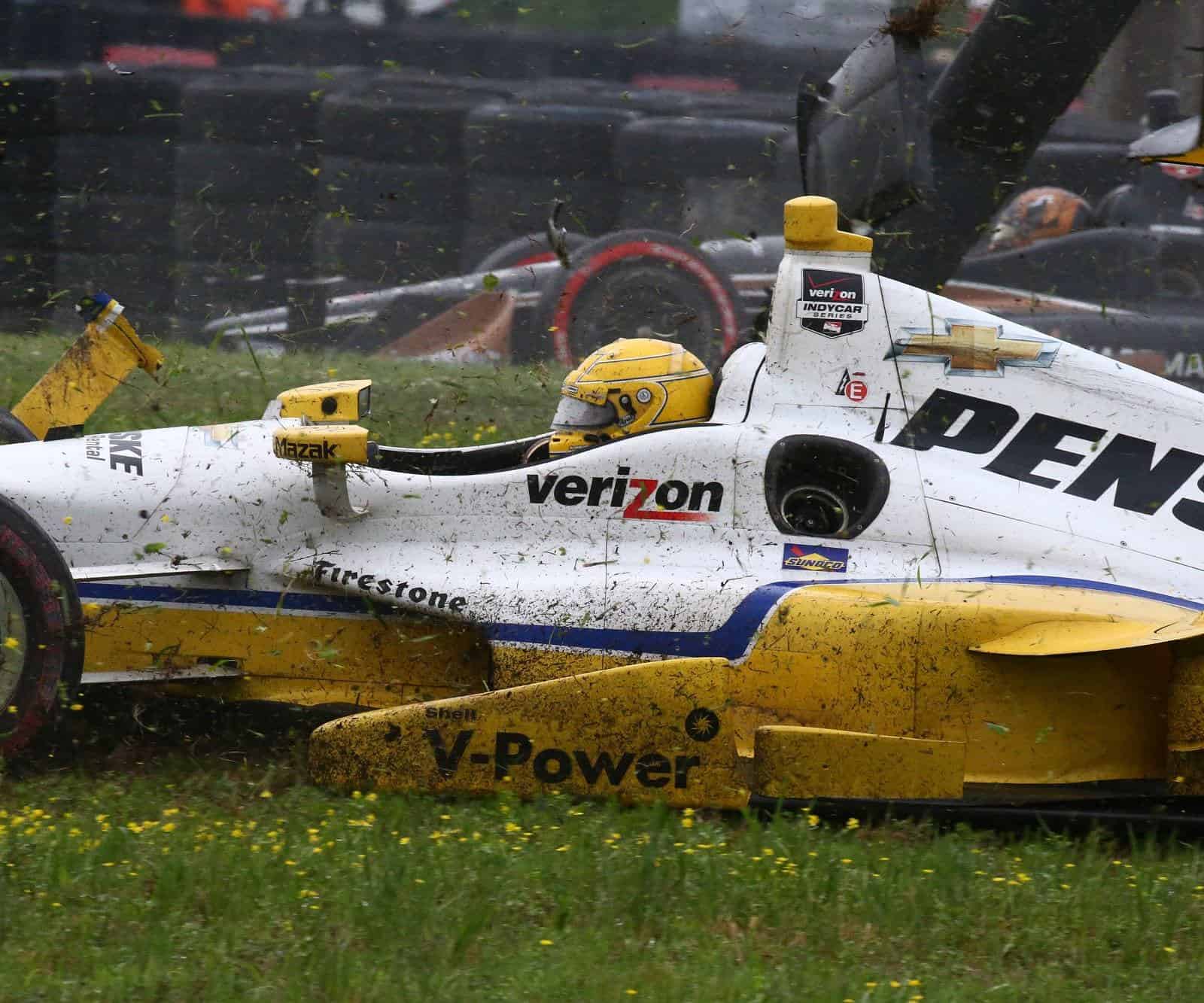 Xfinity Series: The Future Has Arrived – It only took nine races until Erik Jones drove a Joe Gibbs Racing car into Victory Lane. The soon-to-be 19-year-old outran two Cup Series veterans at Texas, and in doing so, gave JGR its first Xfinity Series win since Matt Kenseth‘s triumph in the season-finale last year.

Jones’s victory marks the start of a new era for Gibbs’s team. He is expected to be a Cup Series driver over the next year or two at his pace, and the team is attempting not to make the same mistake it made by rushing Joey Logano through the ranks. He will continue to run well this year in the Truck Series and Xfinity Series, and expect him to continue to outshine the Cup Series stars.
Meanwhile, the championship battle continues to tighten up. Ty Dillon ran in the back part of the top 10 for the majority of the race, and finished 12th, which has put Chris Buescher a mere two points behind the championship lead. Finished outside of the top 10 for the second straight race, Dillon’s title hopes continue to diminish. Reigning champion Chase Elliott had minor struggles at Texas, which was surprising considering it was one of his best tracks during his championship season. – Joseph Wolkin

NHRA: Redemption in Las Vegas – The SummitRacing.com NHRA Nationals ended up being a game of redemption for three racers still searching for their first victories of 2015. John Force found himself deep in a hole after first-round exits in the first three events (he made it past the first round for the first time this season at the 4-Wides), but his John Force Racing operation showed some muscle this weekend as Force advanced to the finals and found himself facing his own teammate, Robert Hight.

“Robert is my best team,” Force said. “He’s hot on that Christmas tree so I really got to get after him. The win was good but all that we’ve been through, with financial change, my sponsors promised to keep me competitive, win championships and I could build safety. We were lucky today and I’ll take lucky any day because it buys us some time to learn.”

Erica Enders-Stevens started the season well but the debut of a new car at Gainesville and then Charlotte did not go well. The team brought back the car she won the championship with last season and it paid off, with not just the race win, but the K&N Horsepower win on Saturday, earning Elite Motorsports the $50,000 winner’s check and giving them the double victory for two consecutive years.

“Just very proud for Elite Motorsports and Elite Performance,” Enders-Stevens said. “My guys work so hard and continue to give me a consistent race car which has been a struggle to start this year. I think we got our hot rod back and I guess we can start saying Vegas is our lucky track. Winning is so dang challenging and to be able to come here and do what we did yesterday and double up again today is certainly a high-pressure situation but my guys thrive on it and perform very well under it. I’m so proud of them and proud of our team.”

Enders-Stevens had to go through Vincent Nobile twice to score the two wins as both drivers found themselves in the finals both days. She also defeated Matt Hartford, Jimmy Alund and Greg Anderson before taking on Nobile. Enders-Stevens posted a 6.674-second, 207.24-mph pass for the hole shot win over Nobile’s matching 6.674 seconds, 207.91 mph.

Riche Crampton, in his second season in Top Fuel, scored his third career win in that category, beating Larry Dixon with a 3.902-second, 301.33-mph pass. Crampton defeated Troy Buff, Steve Torrence and JR Todd on his way to the finals. – Toni Montgomery

Sports Cars: Controversy Marks ELMS Finish – Saturday’s 4 Hours of Silverstone was the season opener for the European Le Mans Series at Silverstone Circuit. While the race did mark the race debut of the new Ginetta-Nissan LMP3’s (first thoughts: they look like Argo chassis that competed in IMSA’s Camel Lights class around 1987) and the return of Strakka Racing to competition for the first time in nearly two years, those aspects will not be what the race is best remembered for. Instead the race will be remembered for a late incident and a no-call.

The four-hour race came down to a swell duel in the final minutes between the No. 46 ORECA 05-Nissan from Thiriet by TDS Racing driven by former Champ Car racer Tristan Gommendy and the No. 41 Gibson 015S-Nissan (formerly Zytek Z11SN) for Greaves Motorsport with Jon Lancaster in the seat. Gommendy inherited the lead late in the race, but had both Lancaster and Harry Tincknell in the No. 38 Gibson 015S-Nissan in hot pursuit. A spin for Tincknell at Maggotts put him temporarily out of the hunt, leaving Lancaster to hunt down Gommendy at a rate of nearly a second a lap. Lancaster was able to run down Gommendy with a little more than six minutes to go. At that point, the leaders ran up on the GTE-class No. 55 Ferrari 458 Italia GT2 of AF Corse. The leaders split the Ferrari at the Aintree corner, then came together slightly afterwards.

Interestingly enough, that same No. 55 Ferrari played a much bigger role with the leaders towards the end of last year’s race. Last year, the Ferrari driven by Michele Rugolo forced the then race-leading No. 38 Zytek driven by Simon Dolan off the road exiting the Chapel curve. Dolan got in the grass then spun and crashed hard into the wall right near the bridge on the Hangar Straight.

As a result of the contact, Gommendy spun out while Lancaster continued on. Gommendy’s No. 46 was undamaged, but the damage to Thiriet by TDS’s race was done. The No. 46 would eventually finish third in class, 20 seconds behind. Ultimately, the incident brought Jota Sport back into the hunt as well. Lancaster held off a hard charging Tincknell to claim a close victory.

Given the controversial nature of the incident, an investigation was opened into the crash by the stewards. However, after roughly 15 minutes of deliberation, they chose not to penalize Lancaster, confirming the controversial win for Greaves Motorsport. – Phil Allaway

Short Tracks: Racing Resumes in the Northeast – Modified season is officially underway in the Northeast. The NASCAR Whelen Modified Tour kicked off 2015 with their opening race as part of the 41st running of the Icebreaker weekend. Doug Coby turned in a dominant performance to begin the 75th season of racing at Thompson Speedway Motorsports Park (Ct.). The defending series champion was sporting a new LFR chassis, which has grown immensely in popularity in the last couple years. The change turned out to be a successful one as he led all but 19 laps in the 150-lap feature.

Another big start to the season came at Mahoning Valley Speedway in northeastern Pennsylvania with a 125-lap modified show. The theme was very similar, as New Jersey veteran Don Wagner had the strongest car in the end, debuting a brand new Raceworks chassis, and pocketed the $5,000 top prize.

Formula 1: Mercedes Returns to Form – With Ferrari’s win at Malaysia, it seemed that the series might be looking at a challenge as to whom the best team is. The Chinese Grand Prix confirmed that Mercedes is still the team to beat with Lewis Hamilton earning the victory and his teammate Nico Rosberg taking second. The Ferrari duo of Sebastian Vettel and Kimi Raikkonen followed in third and fourth, respectively, with the Williams duo of Felipe Massa and Valtteri Bottas following.
For Hamilton, the win was his fourth at the Shanghai circuit and seemed to indicate that not only is he the top driver at Mercedes but also in the sport. Though Rosberg came close to matching his pace in qualifying, once the race began it was clear that Hamilton had assumed alpha status over the field and that everyone else was figuring out their place in the pecking order.
With Hamilton bagging two wins already in 2015, his position looks secure as the series head to Bahrain next weekend. – Huston Ladner

INDYCAR’s Officiating Staff Drops the Ball once Again – I feel bad for the fans that went to the Grand Prix of Louisiana yesterday. I seriously do. What they saw was not a race. The event was largely about 15 laps of hotlapping followed by 31 laps of watching vehicles follow the pace cars under yellow, with the occasional needless wreck thrown in between now and then. And to make matters worse, the whole thing ended, you guessed it, under yellow.

Yeah, not exactly a ringing endorsement for the NOLA Motorsports Park, which staged it’s first ever INDYCAR race on Sunday in hopes of building a long-lasting partnership between the two organizations. With how poorly Sunday went off, I’m not sure if that partnership will last more than a year.

The race, to be clear, never even should have been run, at least not until the track was dry. The track officials failed to provide a track surface that was capable of withstanding a heavy rainstorm, and INDYCAR officials failed to officiate the race in a safe manner, resulting in an utter mess of an event that saw most of its laps run under cautions conditions. It was clear to everyone with a pulse that the track was not suitable for racing. NOLA was the perhaps the most poorly executed major-league motorsports race since the 2005 F1 tire debacle at Indianapolis, which is not a title INDYCAR needed in a year where it’s financial standing already looks bleak.To be honest, I’m pretty shocked that the outcry against the race hasn’t been louder. INDYCAR simply can not keep making these critical mistakes on weekends where rain was a factor. We saw a similar debacle back in 2011 when the series took a chance with inclement weather in a race at New Hampshire. The result? An infamous photo of Will Power giving a double bird to INDYCAR officials in the tower above the track.

Sunday’s race was just one of a long-line of failures by the INDYCAR officiating staff, and I’m sad to say that this may have been its worst officiating blunder yet. Oi vey. – Matt Stallknecht

Must say that’s its refreshing to see Frontstretch spreading it range of coverage this year. In an increasingly worldwide environment its necessary. Some of the European series, BTCC for example, offer extremely competitive racing. Keep up the good work.