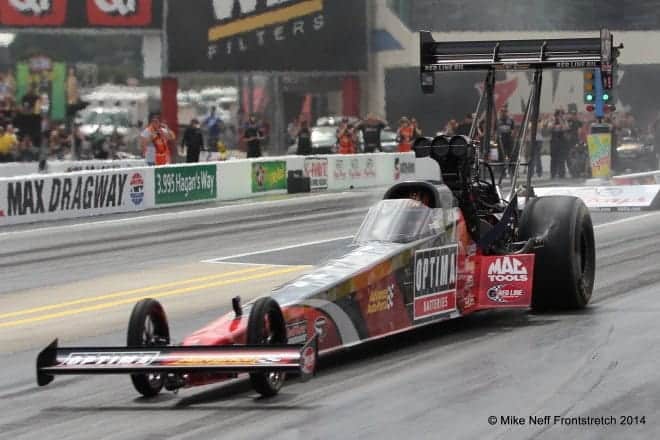 JR Todd, our featured driver in Nitro Shots this week, celebrated his one year anniversary driving a Top Fuel dragster for Kalitta Motorsports this past weekend, having started with the team at Las Vegas last year.

So what does a guy who goes over 300 mph in under four seconds do to celebrate? Something that’s possibly even more crazy, if you can believe it: Todd jumped off the tower of the Stratosphere Hotel on the Las Vegas Strip.

The SkyJump is a leap from 108 stories up, sending jumpers on a nearly 1,000-foot fall at speeds of over 40 mph to land on a small target on the ground below. Sure, it’s not nearly as fast as Todd usually travels that distance, but he also doesn’t usually see the ground rushing up at him either.

It must be something in the blood of racecar drivers, because it turns out that Todd is not the only daredevil in the group. When asked about one thing they’d like to do, some of Todd’s fellow drivers had crazy answers of their own. Alexis DeJoria wants to bungee jump. She’s already tried skydiving, but Jack Beckman hasn’t, and he’d like to. Tony Schumacher wants to try his version of skydiving with a squirrel suit. Ron Capps wants to take it even higher and go into space.

This probably shouldn’t come as much of a surprise, though. When you have a job that’s as much of a pure punch of adrenaline as these drivers have, it takes a bit of doing to find something to do that might be more exciting than just another day in the office.

Driver of the Week: JR Todd

2007 – Two wins in three final round appearances; earned a spot in the Countdown to the Championship.

Some Things Most People Don’t Know About JR: His father raced motorcycles and JR enjoys them too but ended up in drag racing because his parents thought a Junior dragster would be safer than riding a motorcycle. Competed in the NHRA Jr. Drag Racing League from 1993-1998 along with future champions Shawn Langdon and Enders-Stevens. JR hopes to add his name to the list of Jr. drivers who went on to championships.

For more on Todd and the next generation of NHRA racers, watch for a special feature on the Jr. Drag Racing League coming soon here on Frontstretch!

What’s the craziest thing that has ever happened to Todd at the racetrack? This story goes back to his time as a crew member working in the pits.

Last week was about red lighting and crossing the center line, two offenses that will get a driver disqualified. What other ways might drivers run afoul of the rules? Not staging is probably the next most frequently seen. This is what happened to Matt Hagan at Charlotte a few weeks ago. Failure to properly stage, whether it be because of a mechanical issue that keeps the car from pulling to the starting line at all or not rolling into the staging beams properly within the proper amount of time, as happened with Hagan, this will get a driver disqualified. As in many other forms of racing, vehicles are also subject to inspection, whether it be checking the weight of the vehicle or tearing it down to make sure it meets the engine and chassis rules, and any irregularities found could also lead to disqualification.

As in 65 years and 11 months, the age of Force, who beat his own record from last season as the oldest winning driver in a Funny Car when he won last weekend at Las Vegas.

The NHRA Mello Yello Series is off this weekend but returns to action for the O’Reilly Auto Parts NHRA SpringNationals from Houston, Texas, April 24-26. This is the second of five live events on the slate for 2015, and for those who might like the cars that go in circles, NASCAR races on Saturday night. That leaves Sunday free for the straight-liners to be the show!