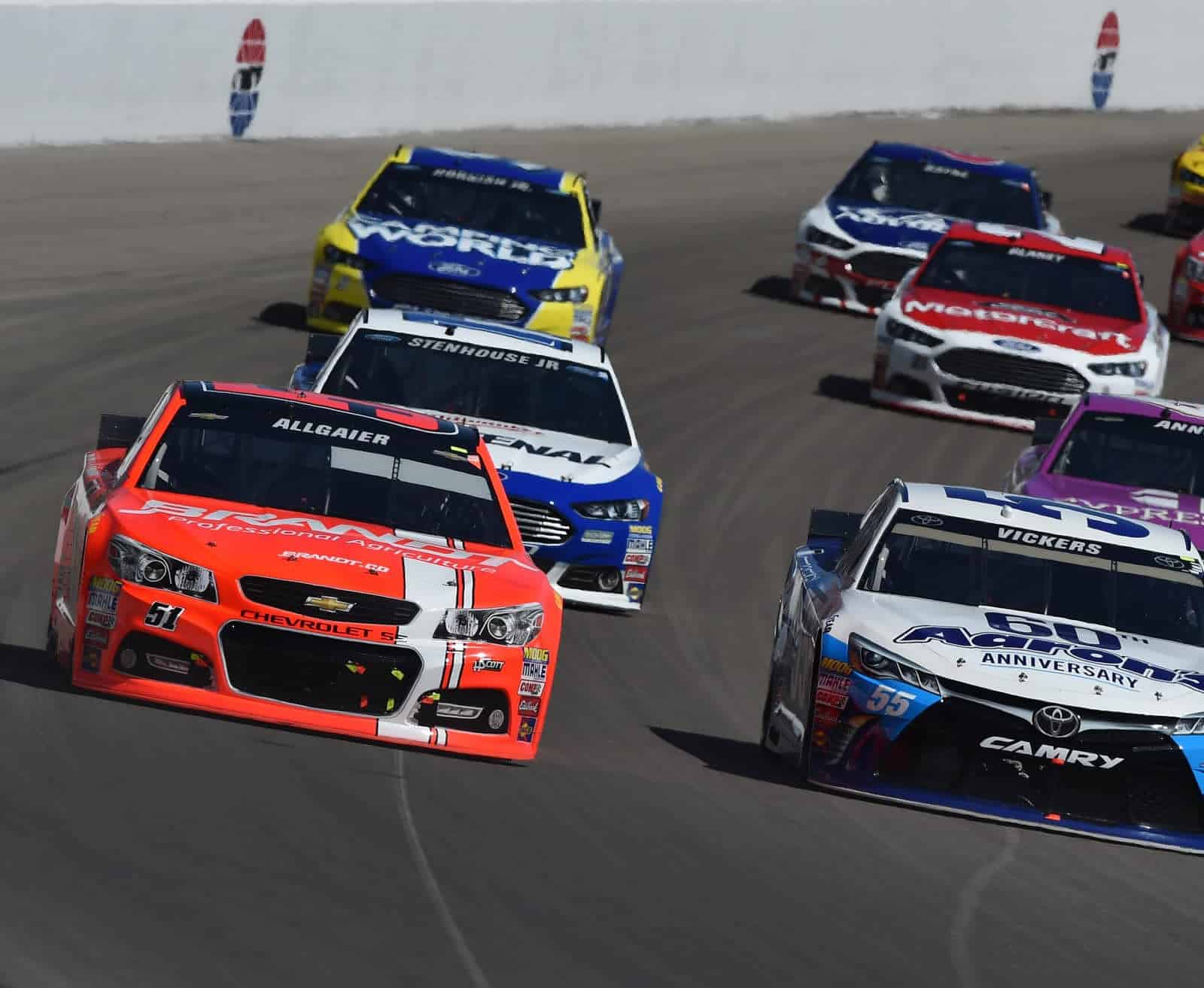 Welcome to the Frontstretch Five! Each week, Amy Henderson takes a look at the racing, the drivers and the storylines that drive NASCAR and produces a list of five people, places, things and ideas that define the current state of our sport. This week, Amy dispels come common NASCAR fallacies.

It might not be 100% squeaky clean, but the bump and run, if done right, is hardly a low-down dirty move. The emphasis here is on done right. A correctly executed bump-and-run is a move where one driver roots underneath another with his bumper and moves him up the track in order to execute a pass. A correctly executed bump-and-run does not – I repeat, not – wreck the other driver. Kevin Harvick‘s move on Joey Logano at Texas was a bump and run, properly performed. Logano lost several spots, but he didn’t crash. If you were wondering why Logano wasn’t angrier afterward, that’s why. Sure, the move might ruffle a few tailfeathers at the time, but if it’s made in the closing laps of a race for position or a win and as long as it doesn’t crash the bumpee, it’s not dirty pool.

The video below is a correctly executed bump-and-run, in the closing laps, for the win. Nobody got wrecked, and the move was legit.

It was only a fuel-mileage win. That’s something you hear a lot, and it’s really a silly statement. A win is a win is a win, and at NASCAR’s top level, it’s an impressive feat. Winning by strategy is not somehow less legitimate than winning by force. Fuel-mileage racing is a high-stakes gamble that doesn’t always pay off. When it does, it might mean that the race winner is someone who would likely not have won otherwise, but that doesn’t mean the win was undeserved or not as good as if a more dominant driver had won. When races are 400 or 500 miles in length, a variety of strategies come into play: fuel, tires, pit stops. They’re all important and any of them can mean the difference between a win and second or 15th place. That’s why winning at the Cup level is so difficult and why you can’t put a value on how the win happened, unless the car was found to be illegal afterward, which is something else entirely.

3. If a driver isn’t winning, he’s not talented.

While it’s a given that some drivers are more talented than others, nobody gets to the Cup level without a talent that’s far above average. There are a number of reasons that drivers don’t win or win often, and it may be that a few aren’t quite up to that monumental task, but for the most part, they’re all good enough to win. What separates the winners from the rest of the pack is more often money and resources. Even among the elite, teams hit dry spells where their drivers aren’t as competitive as perhaps they should be, all things being equal. That certainly doesn’t mean that anyone has forgotten how to drive or wants it any less. The best in the game can hit a slump, and the lowliest team can have a great performance during a given race weekend. But if a team doesn’t win, writing off the driver as a second-class hack is simply not accurate. Nobody got to the top by accident, but not everyone has the total package of money and equipment needed to win in Cup.

4. Only a few teams bend the rules.

When allegations of tire-tampering on the No. 31 team of Ryan Newman came to light a couple of weeks ago, many immediately jumped to the conclusion that the team’s 2014 success was entirely due to cheating the system. That’s a pretty big leap. Fans like to question success, and there’s a tendency to assume that any team that’s extraordinarily successful is bending the rules. Nobody wants to admit that talent and hard work alone could produce such results. There’s also the perception that some teams get away with more than others, but there’s no reason for NASCAR to play favorites at the end of the day.

That’s not to say that every team is 100% on the straight and narrow every week. If anything, it’s the opposite; everybody is pushing the limits somewhere, or if they’re not, they’re falling behind the competition. It’s much more a matter of how far they’re pushing and whether they get caught pushing too far. When they do, they deserve the punishment, and when they’re legal, even if it’s by a fraction of a fraction, they’re legal. It’s part of the game and has been since day one. If anything, any cheating today is far less blatant than in the past, when NASCAR’s inspection process was far less technical and more lax.

5. Winning is somehow a bad thing.

Sure, it gets monotonous when one team is dominating. If you don’t like Harvick or Jimmie Johnson, you might not be too happy with the way 2015 is going, especially if your guy isn’t having that kind of season. But bad for the sport, as some would have you believe? It’s not. NASCAR has had dominant drivers since the start, and the sport has survived just fine. And I’m talking about the sport’s top level, here; the top-level drivers dominating at lower levels is a whole other ball of wax. If anything, from NASCAR’s standpoint, a dominant season is a marketing tool if it compares to the best ever.

For fans, it’s totally understandable why one driver winning a lot is frustrating. But think about it… if that fan’s favorite is the one winning seemingly every other week, it’s not a bad thing; in fact, it’s a great thing. If it’s a driver he doesn’t like, it’s a far different story. That’s called being a loyal to your driver, and it’s a part of why the sport’s fanbase is pretty great as a whole. But to say it’s bad for the sport sounds more like sour grapes than a legit gripe. The sport has survived dominance before and it will survive the next dominant driver too. There’s no such thing as winning too much. Anyone who has ever competed successfully at anything knows that.

So if you lead 499 laps at Martinsville and get punted and finish second that’s OK. Wouldn’t you rather see a driver try to pass on the outside for lap after lap and finally get past and earn the win? If you want to win like that you better be prepared to lose like that.

After you watch racing for a while you realize it’s the car not the driver. A good driver in a good car will win races. I’ll bet that you could put another driver (Kyle or Brad?) in the 48 and he will do just as well if not better than Johnson. I wonder how Johnson would do in the 47? I wonder what the 48 record would be if David Pearson or Cale Yarbrough or Bobby Allison spent their career in the car?

With respect to drivers’ actions, people see what they want to see and that is basically what affects their driver’s results or stature. If it’s someone they like then they embellish and defend, if it’s someone they don’t like they discount and undermine. Human nature. Impartiality in judging is the myth.

As for NASCAR the governing body, I think that’s a different story. Some of their foibles are much more obvious. For instance, fake debris cautions are not a myth. I think most would agree that they really exist.

Or you can lead 499 laps at Martinsville and NASCAR will throw a cautiion and force a double file restart with a GWC and you lose the race.

I mind NASCAR’s manipulation far more than any bump and run – at least that’s racing, not manipulation.

The same goes for fuel mileage races — IF NASCAR doesn’t interfere and let’s things play out, then it is just the way it is – even though I tend to find that pretty boring to watch.

Johnson? Well I’m not a fan of his and I think that he and Chad have done a fine job of learning how to game the system with the chase. If not for that, that team wouldn’t have 6 big trophies.

Nothing wrong with the bump and run. On plenty of tracks it’s the only way to get past someone. I know Rusty was mad but tough luck. It’s not like Rusty didn’t do the same to other drivers.

Amen, Dennis! Also as pointed out, Gordon moved him, he didn’t wreck him. That’s the difference between a bump and run and a punt!

Of course it didn’t matter, Rusty has still not forgiven that bump. Rusty’s anger with Jeff showed up in every interview even after Rusty retired..

I am still calling hypocrisy the racing media regarding this subject. Double standards abound, if this situation was reversed darn sure the press would not be so “forgiving” of Logano. I say this all the time, but it is true and very recent (this double standard reporting) The media bias is showing it’s colors again. And again, that move doesn’t “wow me”..it’s what said after that gets me pissed, depending on who did it. And again it always seems to have Logano involved in the “scandal”..the media whipping boy. Chevy vs. everybody else.

As long as you allow drivers to block, then you have to allow bumping. Of course who’s right or wrong is each individual’s personal view.
But please “bump and run” is just another stick and ball term, to try and make the sport palatable to the casual viewer.

Myth #6: STOCK cars. There is probably not a single belt, bolt or washer that is used in the stock vehicle.

So is a bump and run “done right” OK as long as long as it isn’t for the win?

I asked the same question..nobody answered. One of the of bologna statements coming out of the Nascar media and some fans. What is “done right’????????????? The only answer I can see is, if your favorite driver does it GOOD!…a driver you don’t care for BAD! So silly.

To me (your mileage may vary) “done right” means in the closing laps, for position on the lead lap (including the win), and the bump-ee doesn’t spin or hit anything. Jeff vs. Rusty above: done right. Dale Earnhardt “rattling [Terry Labonte’s] cage: not done right. I personally don’t have a problem with blocking, but if a driver blocks a faster car enough late in the race, he’s going to get moved. And he’s not wrecked in the process, then that’s OK.

Thanks Amy. I say this newest “issue” is really a non issue. And it always seems to me certain drivers raise a ruckus about something then all of a sudden it is a media topic. And these things always start with the same suspects..”the do as I say, don’t do as I do crowd” and the media dutifully follows…..more silliness..imo.