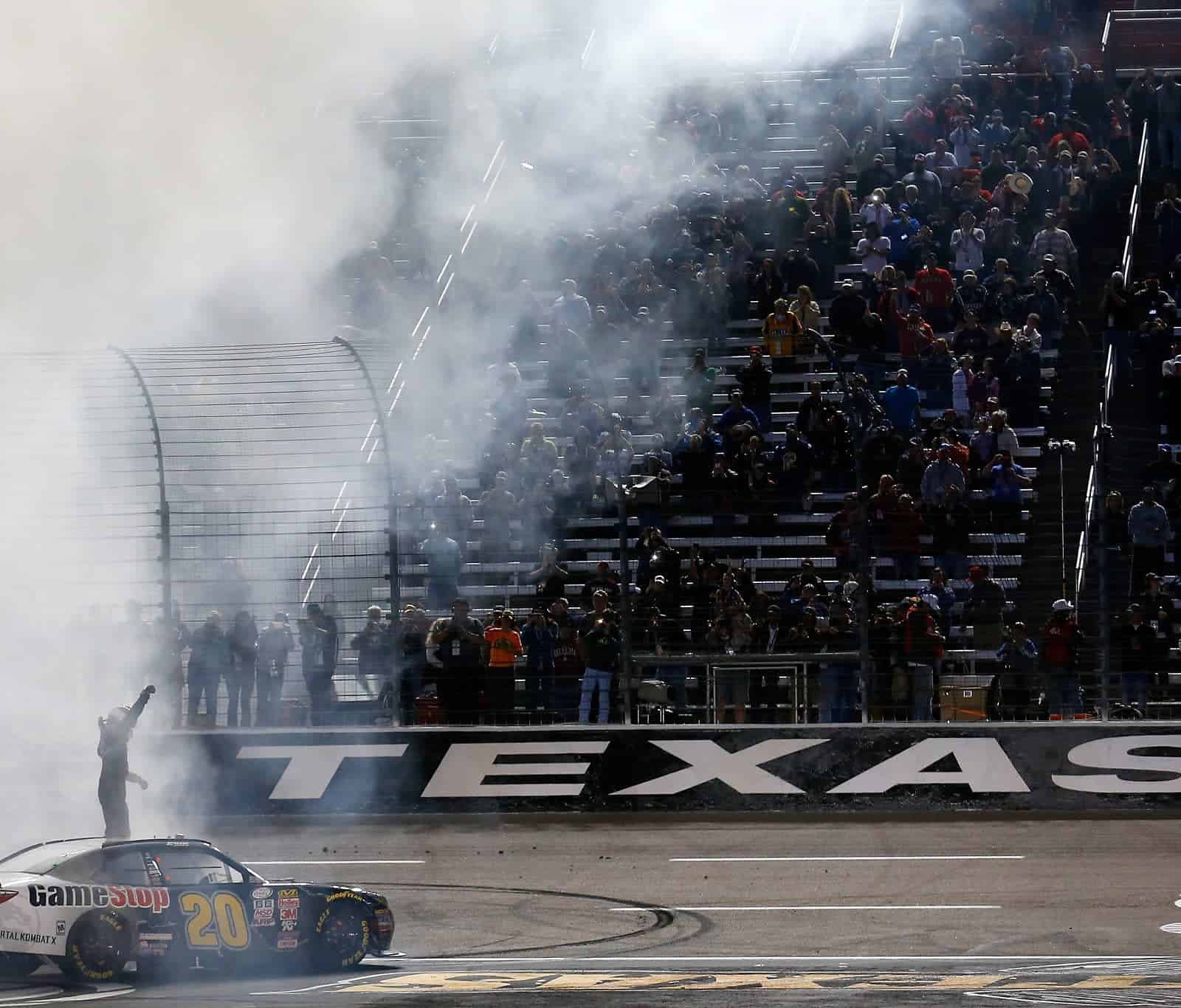 Bristol was long known as a track with beating and banging for 500 laps, but in recent years its reception has grown tepid, though it’s still considered part of the upper echelon of NASCAR tracks on the schedule. Should it still be? Has the racing improved?

Amy Henderson, Senior Editor: The racing at Bristol is better than ever with the addition of multiple grooves – or at least it has the potential to be. I think the reason a lot of people complain is because there’s a lot less wrecking than there used to be. Drivers had to use the chrome horn a lot more when there was a single preferred groove. Where the racing is missing the mark has more to do with the Chase and teams no longer willing to take unnecessary chances. When they race hard at Bristol, the results are great. When they don’t… well, it’s another by-product of a flawed system.

Zach Catanzareti, Contributor: Bristol today reminds me of dirt racing a little, seeing drivers have to perform slide jobs and dive-bomb moves to makes passes and hope it sticks. They have to use skill and patience to pass without simply banging the other out of the way and causing trouble. Some people don’t like it, but I prefer it, with some on and off-track contact thrown in of course.

Joseph Wolkin, Senior Writer: Bristol will always be one of the best tracks on the NASCAR circuit. However, over the years, the reconfiguration have severely hurt the racing at the track. NASCAR’s new package, where cars are faster in the corners, will only continue to hurt the racing at Bristol this year. Hopefully, it will be solid racing after last year’s solid race, which was a giant step in the right direction.

Mark Howell, Senior Writer: Bristol lost some of its rough-and-tumble edge once the track was changed in hopes of creating more opportunities for passing and side-by-side racing. Fortunately, the track has two advantages: its size (the idea of 15-second laps always amazes me) and its mythic aura. Funny how a win at Bristol still means so much to so many, especially in this current era of intermediate-sized track overload.

Bristol has a reputation of being a place of rivalries that can be settled on track. Who is most likely to tangle this weekend?

Howell: I think any old rivalries have been addressed since last season (notice how Eddie Gossage tried to rekindle the Jeff Gordon/Brad Keselowski feud in promoting last week’s race at Texas?). That said, desperate drivers may clash at Bristol to create new rivalries. From the look of 2015 thus far, it appears that points will mean more than ever if a team hopes to make the Chase. That tends to spell aggression during the closing laps of races….

Henderson: I don’t think fans should expect the tempers of old at Bristol. There’s simply too much at stake under the current Chase system for drivers to get into a spitting match. Some tempers could flare if things get crazy during the race, but I’m not expecting anyone to bring the fireworks with them. Those days are, for the most part, in the past.

Catanzareti: Looking past the Kevin Harvick and Joey Logano spat, I will have to go with a surprise. I will be looking at Tony Stewart who has been showing his frustration by knocking drivers out of the way. Maybe the team should put a GPS device on his helmet in case they have to find it later.

Wolkin: There are very few rivalries right now in NASCAR, which is not a good thing. Something needs to spark up, and Bristol is a place that could happen, so we will have to wait and see.

Michael Waltrip Racing continues to struggle to the point that Clint Bowyer ended up screaming at his team on the radio at Texas. What will it take to right the ship for the organization?

Wolkin: This team has been on the decline ever since Martin Truex Jr. left. The third team really helped the flow of things at the MWR shop. But if it wants to turn things around, it is going to have to form some kind of an alliance with Joe Gibbs Racing. Waltrip’s team does not have the resources that it needs, and there are major problems within the shop. Hostility is growing within this team, which is never good, but it is similar to the Roush situation. It can be fixed, but alliances need to be made to do so.

Howell: I think MWR needs to see more of the guy whose name is over the shop door. Mikey seems to be relishing his role as a broadcaster, even to the point where he’s engaging in goofy stunts meant to liven-up race telecasts (ask Denny Hamlin if he likes tacos). What makes Hendrick Motorsports the powerhouse it is is the fact that Rick Hendrick stays as hands-on as possible. Roush Fenway and JGR might be struggling, too, but at least the main men are on pit road and prowling the garages in search of better performance (and not of the on-camera variety).

Henderson: MWR needs a massive internal reset, starting up high within the organization. Righting a ship that’s listing so badly is a difficult task and one that will likely take months, if not years, to complete. The example here is Chip Ganassi Racing. The team began an overhaul two or three years ago and is finally reaping full benefits now.

Catanzareti: Brett Moffitt shocked everyone with his Atlanta top 10, but hasn’t seen the top 20 since. With Bowyer’s fantastic Daytona outing, the team has to be eying Talladega next month. They need more finishes in the top 20 because if you cannot field top 20-competitive cars, you have a problem worse than Roush Fenway Racing lately.

Texas NXS winner Erik Jones is impressing in his extra seat time this season, and JGR owner Joe Gibbs hinted that a Cup start is in his future. Where do you think that will be, and will it be at the expense of David Ragan?

Catanzareti: It will be very interesting, but I have heard Kansas Speedway come up in conversation for his first race. Ragan has been performing great in the No. 18 but at the end of the day, David knew going in that he was a fill-in driver with an opportunity that could end in five days or five months. Time will tell, but if I was Ragan, I would really want to go to victory lane this weekend at Bristol.

Wolkin: Well, with Kyle Busch saying he might be out until early July, there are a few options for Jones to get a Cup race or two down. Kansas is the ideal choice given his record at intermediate tracks, but another start after could come at Dover, where he could possibly run all three races that weekend. There is no way that it won’t be at the expense of Ragan, who would be sent back to the harsh reality of racing for a low-tier team. However, he still has the possibility to make the Chase, along with a shot at getting a better ride for 2016.

Howell: I think we’ll see Jones getting a Cup ride at Kansas. Ragan is always the odd-man-out in Sprint Cup, but that may change given his strong runs of late and the fact that Kyle Busch told us just this week that there’s no set timeline for his return. Pulling Ragan from the No. 18 would be a mistake, in my opinion. I’m wondering if Gibbs will play the HMS card and put Jones in a fifth car with the understanding that it’ll be for just a handful of events by way of driver development. That’s how Chase Elliott got his No. 25 Cup ride with HMS this year. Might Gibbs try a similar strategy?

Henderson: I agree with the assessment that Kansas is the likely place for Jones’s debut. If the organization is smart, they’ll run a fifth car using the No. 54 NXS team. Pulling Ragan, who’s got the No. 18 in the top 10 in owner points, for a rookie makes little to no sense. If Jones was auditioning for that ride, it would be a different story, but it’s the No. 11 he’ll likely be gunning for, and there’s nothing to gain by putting Jones in the No. 18 instead of a fifth car, which is allowed under the rules.

Amy hit it on the head about Bristol. The Chase has reduced the August night race to just another race on the schedule. The days of the anticipation of that race being close to the same as the Daytona 500 are part of the long-lost era we’ve lamented for a decade.

In the chase era I don’t expect excitement anywhere, unless someone is gunning for that first win or within sight of getting to the mythical land of the locked-in.

The racing at Bristol is nothing like it used to be. And it isn’t that the majority of fans want to see a wreck-fest. Bristol was the most dramatic racing there was. Trying lap after lap to get past the guy ahead and finally nudging him with your bumper didn’t wreck him most of the time. What it did, of course, was push him out of the groove where he might lose several spots before he could get his car back down in the low line. And that’s what would get the drivers so angry. And, obviously, sometimes the driver couldn’t save the car and bang into the wall. Then they were livid. You just never knew how laying the bumper on to get past was going to work out. This was drama.

Now, we have guys running lap after lap side-by-side without touching. But, many scribes want to pretend that this is a better style of short-track racing and that fans that say otherwise must want a bunch of wrecks. Any writer that says that, IMO, is either being disingenuous or is out of touch.

So, the drama is gone. And so are the days when the track was sold out years in advance.

Michael Waltrip lost close to 500 races before lucking into a win on a plate track. That a racing organization that he owns would be a loser should come as a surprise to no one. If the organization won, now that would be a story. But, I suppose with boring gelded cars providing week after week of dull racing you’ve got to write about something.

Bristol has turned into IRP. The only way to run is at the top and there’s no passing on the bottom, unless you have the special car.

I see where Johnson qualified TWENTY-EIGHTH. I wonder how much complaining there will be over the radio and how many “debris” cautions it will take until the car magically becomes the rocket ship it is and leads.