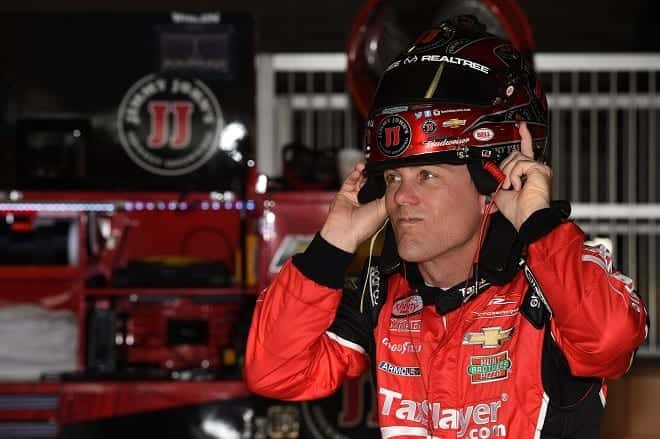 There’s a lot of great racing tradition at Bristol Motor Speedway, whether it’s the track’s penchant for providing all kinds of beating and banging across hundreds of miles of racing or the tempers that flare throughout – not to mention the coliseum-like atmosphere suggested by the seating arrangements.

And then there’s the music.

No, not the pre-race concerts or the National Anthem, though those are undoubtedly a great time, too. What Bristol does for its NASCAR Sprint Cup Series races is akin to baseball’s intro music when each batter walks to the plate: driver-picked songs played as each racer is introduced for driver introductions.

Not that you usually get to hear them unless you’re either at the track or actively seeking video footage online, barring the occasional, brief snippets shown during pre-race telecasts. It’s an easter egg targeted toward the attending crowd, a clever way to get a handle on the musical tastes of their favorite drivers (if it wasn’t already clear on social media) and even a chance for each to get in a few words to the fans before heading off to their racecars.

Since Bristol started its tradition of driver intro songs, there have been plenty that aren’t just amusing choices – they make sense, too. Whether they meant them to or not.

Here are some of the best.

You can call it obvious, but sometimes a choice is so obvious that it’s stranger when someone doesn’t go with what’s expected, and Harvick chose the song while it was still one of the biggest in the world. No-brainer, really.

Hamlin chose this song when he was on top of the world: his impressive 2010 season that saw him leading the championship until the very last race of the season. Plus, not like Rocky ended up winning in the first film. What, spoilers? Oh, come on, y’all have seen it.

“I drive fastly, call me Jeff Gordon/ In the black SS with the navigation.”

Got a feeling Martin’s younger brother was saying that word plenty in his ill-fated rookie season of 2014.

He’s been well-equipped to choose songs with outlaw in the name because… well, you know. What sets this one apart is the year in which it was used: 2013, which was, in fact, a pretty good year for the Outlaw.

Again, obvious – but we can’t not mention it. Gotta say, if you’re an unknown artist, a great way to get some exposure is to write a song about a driver so he or she can use it for intros. Smart thinking.

How far would you go to please your sponsor?

Another Gordon submission! Like or dislike the guy, there’s no denying he’s had a bit of a reputation for being a little… shall we say ‘white bread’ throughout his career? In that case, here’s the musical equivalent of the word.

Marcos Ambrose – “Down Under”

THE ONLY CHOICE THAT EVER MATTERED, MISS YOU MARCOS.