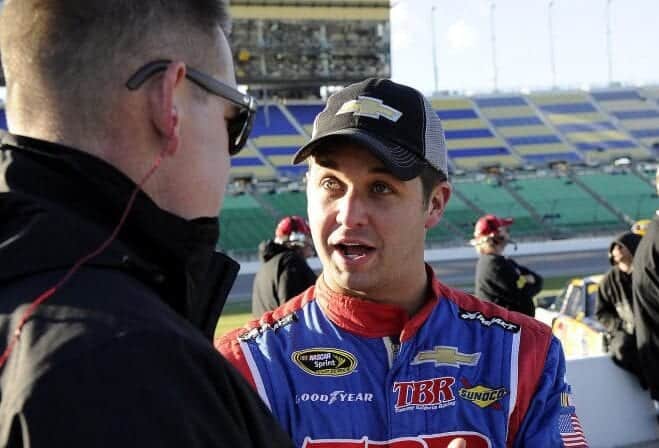 Reed Sorenson just got a new job, if only for a week.

It has been a rather wild start to the season for Front Row Motorsports. Originally scheduled to have two full-time cars with one driving the majority, but not full season, it appears the team is on track to have all three Fords run all 36 NASCAR Sprint Cup Series events.

With David Ragan racing for Joe Gibbs Racing in place of Kyle Busch on an interim basis, veteran Joe Nemechek and rookies Chris Buescher and Brett Moffitt have piloted the No. 34 car for FRM.

Buescher finished 20th in his Cup Series debut with the team, and has finished inside the top 30 in each of his first three races. However, he cannot race at Richmond due to wanting to focus on the NASCAR Xfinity Series race at the short track with Roush Fenway Racing.

As such, Sorenson will drive the No. 34 car at Richmond, which will be his second start of the 2015 season. Qualifying for the Daytona 500 with Team Xxxtreme Racing, Sorenson failed to qualify for any more races after swapping over to RAB Racing – a team that has made four attempts this year.

UPDATE: @ReedSorenson36 will drive the No. 34 Ford for FRM at @RIRInsider next weekend. #NASCAR pic.twitter.com/eYzjj7eJc7

Buescher will return to the seat at FRM at Talladega, which will be his fifth career start. In order to be eligible for the Sunoco Rookie of the Year award in 2016 – if Roush opts to run him full-time – he cannot make more than seven starts this season.

Sorenson has 226 starts in the Cup Series since making his debut in 2005. He has five top fives and 15 top 10s throughout his 11-year career.