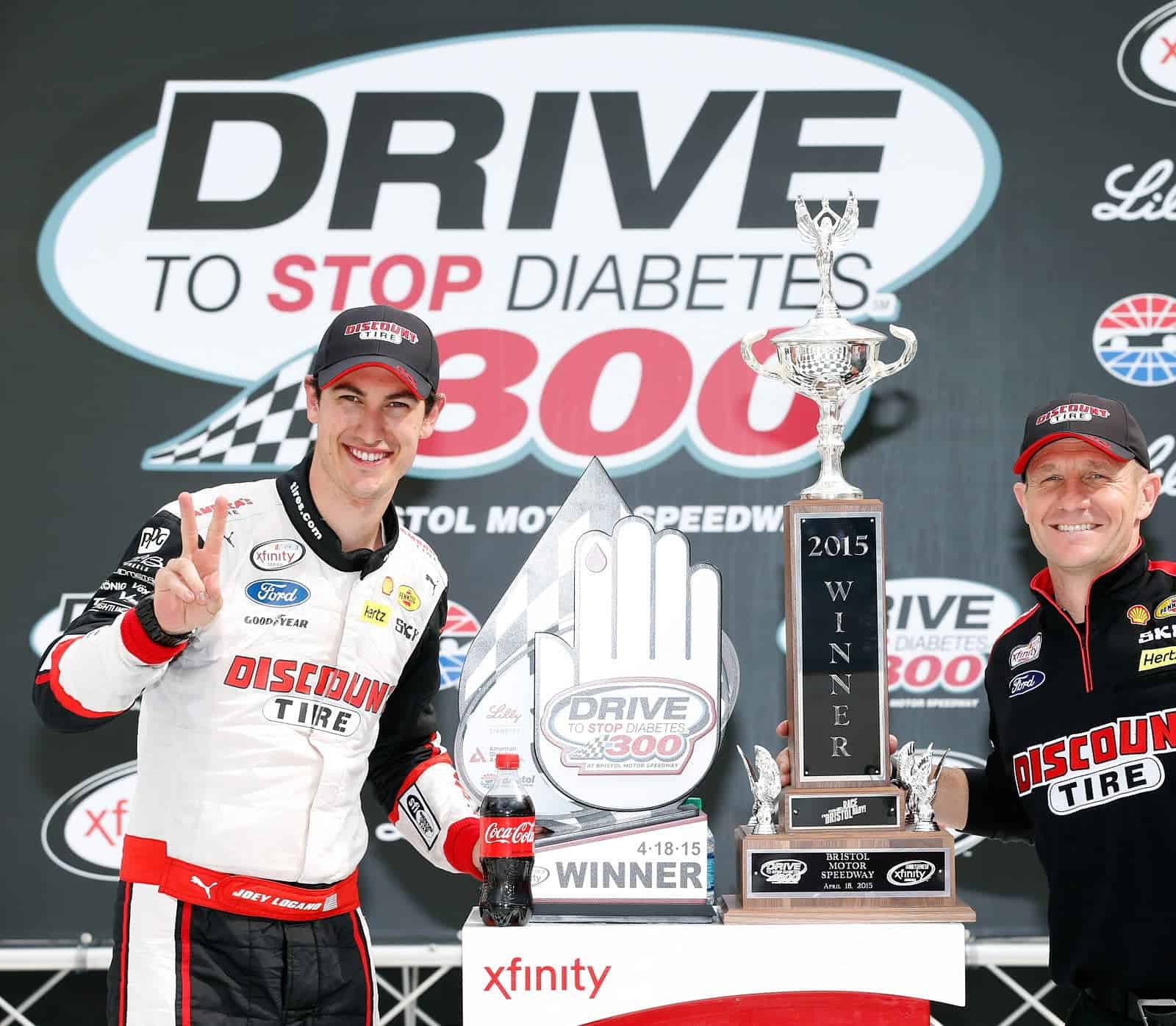 Domination. There’s no other word to describe a race in which Joey Logano led every single lap en route to a convincing victory over Daniel Suarez. Logano made it look easy, holding off all comers for the lead. Chris Buescher, on tires that were many laps older than the rest of the field, not only held on at the end, but passed Erik Jones on the final restart to finish third. Jones came home fourth and Ty Dillon finished fifth. Chase Elliott, who struggled with the handle and radio problems early, came home sixth, followed by Kevin Harvick. Brian Scott, Brendan Gaughan and Elliott Sadler rounded out the top 10.

While Logano was taking the field to school, they were still at Bristol, and that means there’s going to be some excitement. The caution flag flew eight times, six of those for accidents. There was a 10-minute, eight-second red flag when a piece of JJ Yeley‘s splitter lodged in the SAFER barrier next to the turn 3 crossover gate that vehicles use to enter and exit the infield.

The race lasted 300 laps and took one hour, 50 minutes and zero seconds to complete at an average speed of 87.218 miles per hour. Logano won by 1.172 seconds over Suarez, who was Rookie of the Race. 29 of the 40 cars that started the race were running at the end.

Buescher’s third-place finish puts him in a tie for the points lead with Dillon. Defending series champion Elliott sits 12 points back in third. Darrell Wallace Jr. is fourth, 10 behind Elliott, and from there, the gap is another 16 points to fifth-place Ryan Reed. Sadler is sixth, Gaughan sits seventh, and Regan Smith, Scott and Suarez round out the top 10.

Logano ran a flawless race. He said afterward that his lead almost made him nervous, waiting for something to go wrong. Nothing went wrong, and Logano pitched a perfect game. Not bad considering he wasn’t even supposed to be in the car; he was a last–minute replacement for Ryan Blaney, who is eligible for the series’ Dash for Cash program and elected to run those races instead. Logano also set two records in the race: he’s the first driver to lead every lap in an Xfinity Series race at Bristol and his 300 laps led is a series record.

Suarez had his career-best finish at Bristol. The learning curve has been steep at times for the 23-year-old Monterrey, Mexico native, but he’s quietly having a solid rookie season, with five top-15 finishes in seven races.

Buescher was fun to watch all afternoon. After starting 14th, Buescher used a a pit gamble to grab some track position, which he never relinquished, even on aging tires. He was aggressive but not foolish, and because of his stellar race, leaves Bristol with a piece of the points lead.

A broken rear-end gear isn’t something that happens often, but it happened to Denny Hamlin on Saturday. He got into the wall in turn 4 and then brought out a yellow flag for the fluid he dropped on the track. Hamlin, who had been running third at the time, spent 70 laps behind the wall, and though he returned to the track (the No. 54 is trying to win an owners’ title), he finished just 31st.

Smith, who’s hoping to contend for the driver’s title this year, also had issues during the race and spent significant time behind the wall. A JR Motorsports Twitter post cited an as-yet unspecified mechanical failure. Smith finished 30th and dropped two spots in points as a result.

Not what you want to see when racing at Bristol. Mechanical failure. #jrm7 pic.twitter.com/FkGlMr3cXL

It’s never fun to be the cause of a caution, and Jeremy Clements had the distinction of doing it twice at Bristol, spinning on the backstretch and crashing in turn 1 in his No. 51 machine. But if you think that meant his day was a wash, think again…

…because Clements went on to finish 13th, the first car a lap down and the best among the underfunded teams. It wasn’t pretty, but at the end of the day, it was solid. Clements moved up a spot in driver points to 12th. When all is said and done, it doesn’t matter how he got there.

There were a total of eight drivers in the race you’ll see again on Sunday: winner Logano topped Cup regulars Harvick, Austin Dillon and Hamlin. Among those earning Xfinity Series points and running Cup cars on Sunday, Buescher was the best finisher over Mike Bliss, Landon Cassill and Yeley. Gaughan also attempted to qualify for the Cup race but did not make the field.

It was almost a shame that Logano had such a dominant performance, because it overshadows some excellent racing and storylines from the day. While the focus was on Logano, the NXS regulars put on a stellar show behind him. Buescher, Suarez and Jones had top results, along with Ty Dillon, Elliott, Scott and Brennan Poole. There is a huge amount of talent in the Xfinity Series right now, and it’s too bad that it’s so often overshadowed by interlopers, because these are the drivers that will be the Cup stars in a few short years if all goes according to plan.

In particular, Jones continues to be one to watch., and one you can bet is watching very closely is Hamlin. With no contract confirmed at Joe Gibbs Racing after this year, Hamlin could be on the hot seat if Jones continues to progress as rapidly as he has. It’s probably a year too early for Jones to really be in this position, but with a ride possibly opening up for 2016, it’s happening now. He’s younger than Hamlin and already a proven NASCAR winner, while the former has never quite been able to close the deal on a Cup championship. With four Cup cars already, JGR has no room to expand for beyond a handful of races, so either Jones will have to race elsewhere in Cup, or something else has to give.

“I’ve never led every single lap in a race before. What a fast Discount Tire Ford. Gosh, that’s amazing. You’re waiting for something to go wrong. Such a fast car and with late cautions and all that stuff, and you’re like ‘Alright, where am I gonna blow this thing?’ Because those are the ones you’re just nervous throughout the whole race, but what a fast car. Greg Erwin and all this team here, it was a perfect day. I can’t ask for anything more out of them. I want to say hey to Steve Byrnes back at home. We miss you, and we’ll try to do this again tomorrow.” – race winner Joey Logano

“We’ve been talking a lot since I started racing in the NASCAR Camping World Truck Series for KBM, but since Texas, I started talking a little bit more with him about the race track and what’s going on and what to do. A little bit of everything for advice from him. It’s been a huge change since Texas. Maybe [at] Texas we didn’t have the result, but we showed we had the speed. I believe everything that we’ve been building the last few weeks is getting better and better.” – runner-up Daniel Suarez on getting advice from Kyle Busch

“That was a lot of fun. That was the best we’ve run at Bristol since I’ve been doing this the last four of five attempts here, so it was a good day for us. The guys did a good job. It was tough today. The line moved up, especially those last 30 laps. It was kind of unfortunate, but track position was a big key here today. We were able to stretch it on a set of tires (from) there somewhere close to the halfway point and really made a good run out of it, so it’s a big gain. We’re tied for the points lead, which is pretty cool. I wish we could have gotten just one more, but it was a really good day. I’m a little wore out now, but looking forward to tomorrow’s or Tuesday’s Cup race, whenever it may be.” – Chris Buescher, finished third

Actually, boredom may be a better word than domination. I see no reason to waste my time with this series any longer. Let’s stop pretending in print. NASCAR could not make it less interesting if they were trying to.

I can’t share author’s excitement about how Logano “pitched the perfect game” This one was yet another boring and predictable race which adds some concerns to the already gloomy season. What amazed me most is that there was no difference between old and fresh tires (Chris Buescher as the best example). It doesn’t seem right to me.

Agreed. One driver leads every lap at one of the circuits that is consistently hyped as ranking among the sport’s most exciting. That’s not a positive from where I sit.

I did actually watch the race as I foolishly thought that racing at Bristol would be better than what we’ve seen at other tracks this season to which I was proven wrong. To make matters worse I, and about another 1,000 people (judging from the stands) got to watch a Cup regular run circles, (literally) around Xfinity regulars. Sure Logano was dominate; what the heck did you expect?!? He, (and all the other Cup guys) SHOULD be dominate and usually are! How can someone who has an intimate knowledge of NASCAR, who writes regularly about NASCAR possibly be surprised and then write as if we, the few NASCAR fans left should also be surprised that a Cup driver dominated a Xfinity race.

As an aside, and maybe it’s just me but it seems that there is a lot more articles/updates daily on Frontstretch since its facelift which is great but what I found to be a pain is that as new articles are added it pushes one off the bottom on the list on the homepage. The problem being that if you miss a day or you don’t get to the site until late at night finding what you missed isn’t all that easy, if you find them at all. Couldn’t the homepage be reworked to include more new articles; perhaps lose the bit at the bottom which shows the last five Cup/Xfinity articles as there already are links at the top which will take you to all the Sprint and Xfinity articles.

Agree 100% Chris. It should be a news story if one of these cup superstars does NOT win, not shock and surprise when they do. And I can’t understand how Logano is posted under the “good” column. Should be bad or ugly, as any fan of the series has had more than enough of the cup domination in their little playground. Ridiculous!