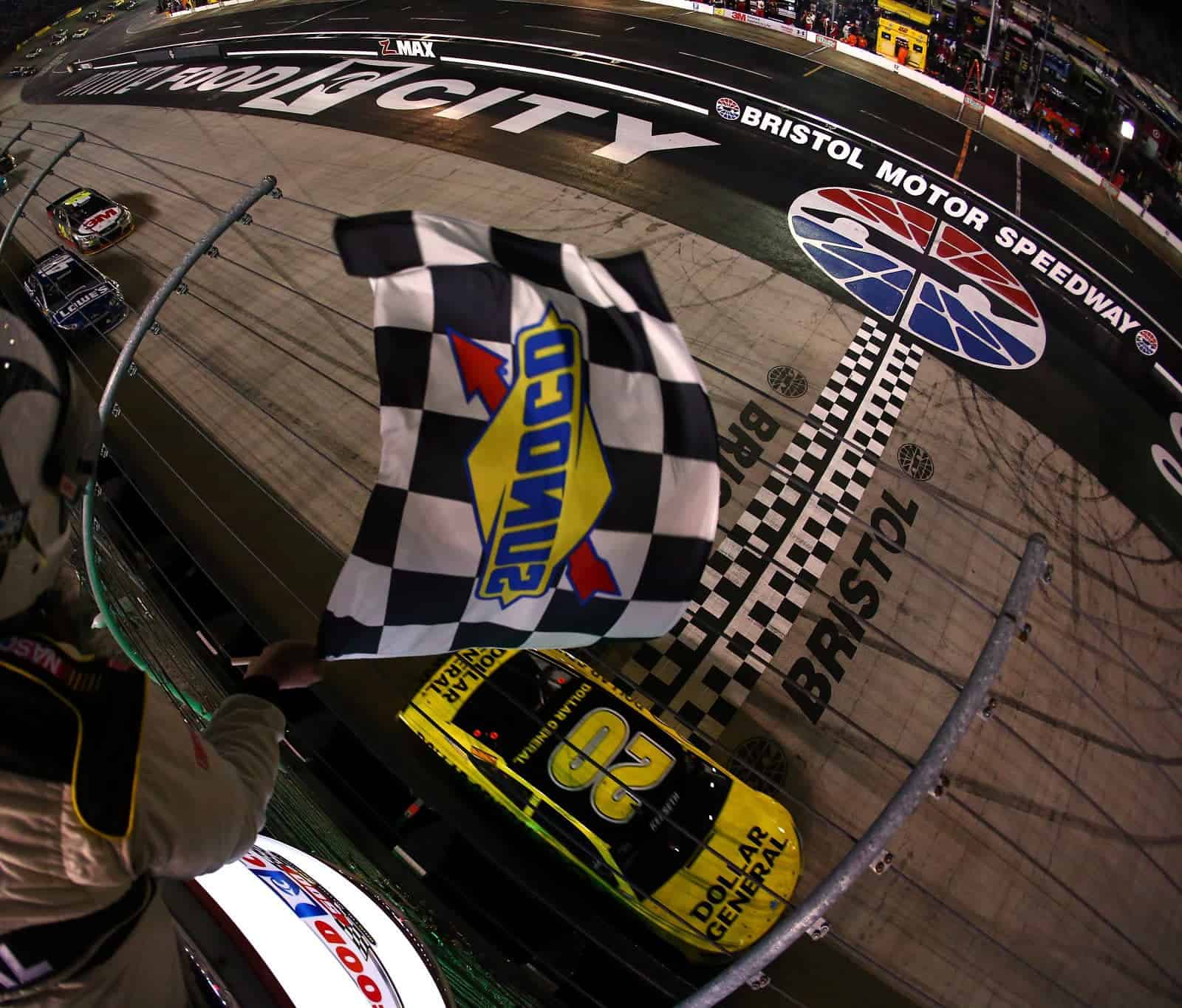 On paper, it will be remembered as the longest race in the history of Bristol Motor Speedway.

For the fans who stuck around for over nine hours, they will remember the wild wrecks, close racing and a green-flag finish for the Food City 500 in Support of Steve Byrnes.

Matt Kenseth was the man above all as he drove his No. 20 Toyota, from pole, to his first victory in 51 races, and his fourth at the World’s Fastest Half-Mile.

“It means a lot. I got a good race team,” Kenseth told FOX Sports 1 in Victory Lane. “Last year was tough and not winning again this year has been tough but we have been putting ourselves in position.”

What set up the final two-lap run to finish was a lengthy caution period followed by a brief red flag to dry the racetrack. Although the rain had been stalking the speedway and showed its face on a number of occasions, NASCAR took great lengths to end the race under green.

Jimmie Johnson had his share of troubles on the high banks, and for a six-time Sprint Cup Series champion was more than glad to come home in second with a shot at the victory.

“That was a wild night,” said Johnson who had run-ins with Kurt Busch and Jeb Burton early in the night. “I have to thank my crew for all the hard work. We rallied back and got a second. Maybe could’ve got a win, but thrilled to get such a great finish here at one of the more tougher tracks for me as a driver.”

Four of those in the top 10 (Stenhouse, Stewart, Allgaier, Dillon) survived to grab their first top-10 finishes of the season.

“It was a battle all night,” Stenhouse said after his second straight top five at the Bristol spring race. “We still lack a little bit to go up there and lead laps and run with those guys.

Hopefully we can continue this momentum, we knew this was a good track coming for us.”

The driver who had the toughest Sunday afternoon/night at Bristol was Denny Hamlin, who did not return to his Joe Gibbs Racing Toyota after neck spasms in the early going.

During the opening 23-lap stint before the first rain stoppage, Hamlin believed he “pulled something” in his neck or upper-back. This circumstance gave Erik Jones driving duties for the first time, driving the car to a 26th-place finish.

Hamlin’s JGR teammate Carl Edwards had his best race of the season, leading 86 laps and before losing control of his No. 19 Toyota while battling Gordon and getting slammed hard from Busch.

Team Penske had a devastating accident on lap 20, with both cars of Brad Keselowski and Joey Logano crashing on the frontstretch.

Busch, still riding a wave of strong momentum, saw 98 laps out front despite spinning on lap 279 and having a hard lap 495 crash with Edwards.

“We had a very very eventful day,” said Busch who finished 15th. “I don’t even know how to describe it. This is a good sign to have good long-run speed and that’s the most positive thing to take from the last couple weeks where we didn’t have that long-run speed.”

Stewart-Haas Racing had a bitter-sweet day if we have ever seen one. The sweet was Kevin Harvick starting the race in fourth and stealing the lead from Kenseth on lap 6, later leading a race-high 184 laps. The bad news? A lap 312 accident sparked by Johnson and Burton collected Harvick, bringing the No. 4 to the garage for 42 laps while the team repaired the car.

The other two SHR cars of Stewart and Patrick brought their cars home respectably clean with top-10 finishes, standing as the bright spots for the team.

During the final lap 495 caution, which lasted 15 laps, third-place runner Dillon ran out of fuel and was forced to pit. Gordon later commented on his concerns on his fuel condition during that period.

“Certainly didn’t like NASCAR running us around under caution for so long, thought we were going to run out of gas,” said Gordon who grabs his first top five and fifth straight top 10 of 2015. “I thought I got a really good restart, as good as I could ask for on the bottom lane.

“At one time it looked like maybe we could get second, but that was just chaos. For us it was chaos the entire race.”

The Sprint Cup Series now heads to Richmond International Raceway next Saturday night for another short-track show under the lights.