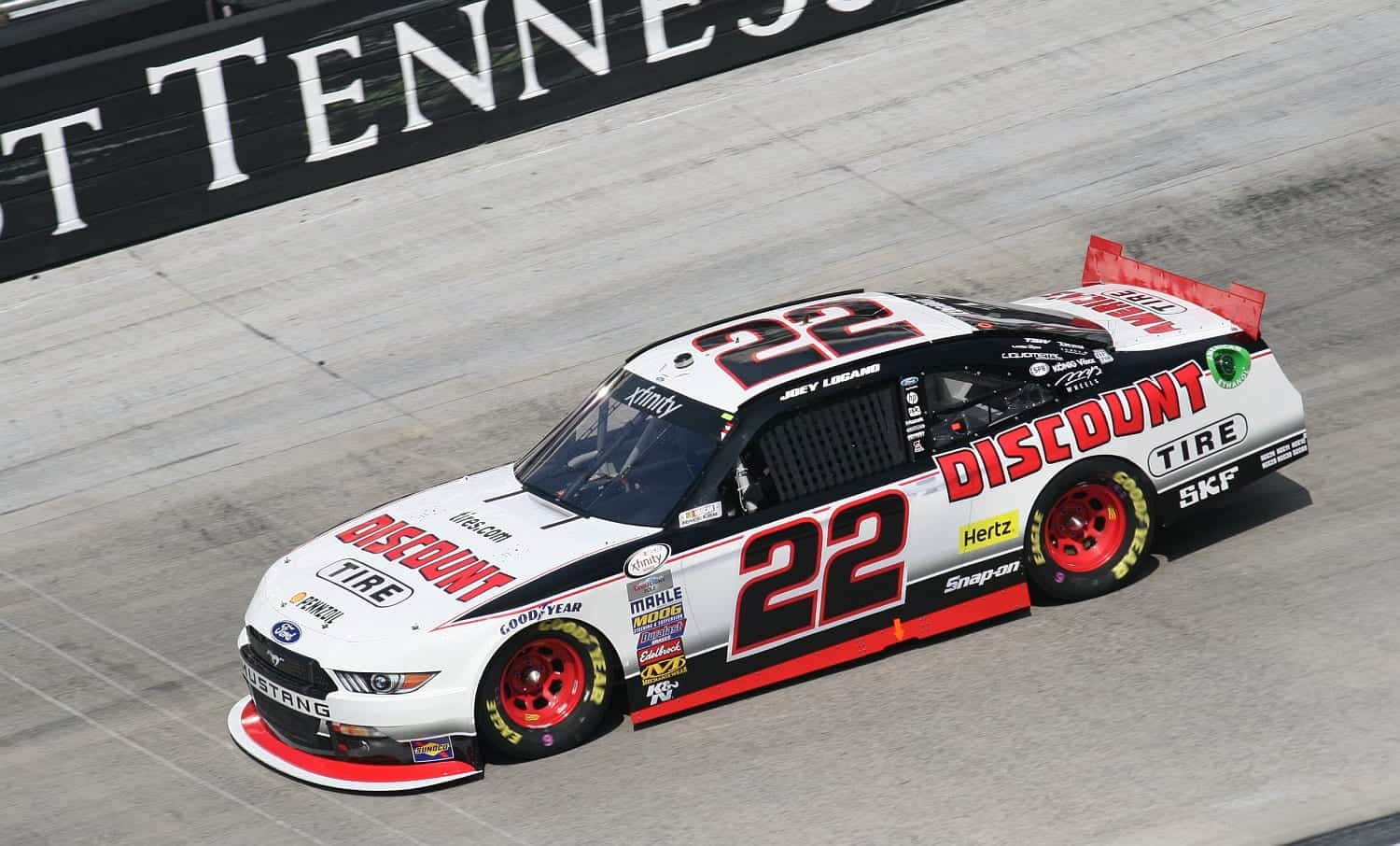 Xfinity Series: It’s Super Joey – Dominating efforts happen often in the Xfinity Series, but it’s rare to happen at a track as difficult as Bristol. However, Joey Logano did the unthinkable on Saturday afternoon – leading every single one of the 300 laps. But that wasn’t the biggest story during the race.

The Xfinity Series regulars were fairly strong at one of the sport’s trickiest tracks. Daniel Suarez, Chris Buescher, Erik Jones, Ty Dillon and Chase Elliott rounded out the top six, which showed they can contend for wins now that they are settled into their rides for the season. With Buescher outrunning Dillon by two positions, the two are tied for the championship lead heading into Richmond. Dillon continues to struggle in qualifying, but is able to bounce back by the halfway point during the races.

Meanwhile, Roush Fenway Racing struggled with the exception of Buescher. Elliott Sadler went a lap down by the halfway point, and Darrell Wallace Jr. was the last car to finish on the lead lap. Ryan Reed finished six laps down in 21st, which was his poorest performance of the year. The team has been able to come away with solid finishes after starting off the weekend rather mediocre, but that was not the case at Bristol. – Joseph Wolkin

Short Tracks: The King of the Wing championship was set up to determine who is the best pavement winged Sprint Car driver at participating tracks nationally. The southeast swing began with a visit to Five Flags Speedway (FL) Friday night. Indiana’s Aaron Pierce set fast time, but it was New Englander Bobby Santos III who took home the checkers, followed by Tennessee’s Kyle Edwards and home-state competitor Mickey Kempgens. The tour was scheduled to go to nearby Mobile International Speedway (Ala.) the next evening, but was cancelled due to inclement weather. Future events will take place at various short tracks in Ohio, Indiana, Idaho, Washington and California.

Up North, the state of Maine had a stellar turnout between the American Canadian Tour and Pro All Stars Series openers at Oxford Plains Speedway. New Hampshire driver Joey Polewarczyk Jr. turned in a dominant performance, but had to hold off Wayne Helliwell and Nick Sweet late in the going for the win.

49 PASS Super Late Models made an appearance, but unlike its southern counterpart, the northern series sets its field based on heat races rather than time trials. As a result, every lap is as important as the next. When the day was over it was the cagey veteran Mike Rowe in victory lane, beating a charging DJ Shaw and Tony Ricci to the line. – Aaron Creed

NHRA: Odds and Ends on an Off Weekend – The NHRA Mello Yello Series is off this weekend, although Top Fuel driver Antron Brown still took to the track, this time in Long Beach for the Toyota Grand Prix of Long Beach Pro/Celebrity race. This was Brown’s first time competing in the race, which would demand he turn both right and left, and the result was a mixed bag. Brown made contact with the car of Celebrity competitor Willie Gault on lap 8 when Gault slid across the track in front of him, but prior to that he had gotten to second in the Pro category and also passed a number of the Celebrity runners, who started with a 30-second advantage over the Pros. Brown also turned the fastest lap of the event on the lap before the incident.

Reigning Pro Stock world champion Erica Enders-Stevens was recognized in the April issue of the International Automobile Federation (FIA) publication Auto+Women in Motor Sport for her championship and her other 2014 accomplishments. The FIA is an international organization that promotes the interests of motorists and motorsports all over the world, and is best known perhaps as the governing body for Formula 1, the World Rally Championship, the World Touring Car Championship and the World Endurance Championship. The April newsletter can be viewed here.

Six-time NHRA champion Jeg Coughlin Jr., is taking a break from the Pro Stock category this season, but he’s not staying away from the track entirely. He returned to action this weekend at the K&N Spring Fling Vegas at The Strip at Las Vegas Motor Speedway. Coughlin stepped away from Pro Stock to devote more time to his family and his family business, JEGS Mail Order, but does intend to put together a healthy slate of bracket races whenever he can find the time this year.

“Driving a yellow car with JEGS on the sides tends to bring out your opponent’s A-game, so I’ll need to get up on the wheel right away. Still, I’m excited. This style of racing is my first love, and it’ll be fun to once again go toe to toe with the top bracket racers in the country,” said Coughlin. – Toni Montgomery

Formula 1: Hamilton Victorious Again – While Ferrari has clearly made gains to compete with Mercedes, who has had the upper hand on the series for the past year and a half, it still hasn’t figured out how to beat defending champion Lewis Hamilton on a regular basis. When Hamilton took the pole position it signaled that he would, once again, be the driver to beat and he backed up the notion even with Kimi Raikonnen running a contrarian tyre strategy.

The battle up front proved to be more interesting than one would have anticipated. Though Hamilton raced off to an early lead both Sebastian Vettel and Raikkonen proved to be able challengers. That Nico Rosberg was able to pass both of those drivers to ride in second place for a while made things interesting, but later became insignificant. A mistake by Vettel, driving slightly off course and skimming into the gravel necessitated a wing change that put him back, while Rosberg’s slip in the final laps allowed Raikkonen to speed by with ease and take the second place on the podium.

Valtteri Bottas held off Vettel to earn the fourth spot, and Daniel Ricciardo kept his Red Bull alive so that he could take home sixth. Perhaps the most surprising aspect of the race is that only seven drivers finished on the lead lap. That result would indicate that a number of teams have a long way to go when the series resumes in Barcelona in three weeks. – Huston Ladner

Sports Cars: Riley Motorsports Gets Some Great News – Saturday’s Tequila Patron Sports Car Showcase at Long Beach was for the Prototype and GT-Le Mans classes only. However, last week saw GT-Daytona team Riley Motorsports get some excellent news. Granted, it comes at the expense of another squad, but you take it when you get it.

On Thursday, Team SARD Morand officially withdrew their P2-class No. 39 Morgan EVO-Judd from June’s 24 Hours of Le Mans. In addition to the 56 teams with guaranteed entries to the race, the ACO maintains a list of seven alternates that can be plugged into the starting field (regardless of class) to replace a withdrawn car. First on that list was Riley Motorsports, who have accepted their entry. They will run a former factory SRT Viper GTS-R in the GTE-Am class for year-old cars.

The driver lineup will be mostly familiar to the team. Riley Motorsports regulars in the TUDOR United SportsCar Championship Jeroen Bleekemolen and Ben Keating will be part of the lineup. Bleekemolen competed last year in the GTE-Pro class with co-driver Cooper MacNeil in an unusual scenario. The team’s original second amateur driver was forced out of the race due to a concussion and the replacement failed to get the mandatory amount of seat time prior to the race, forcing the WeatherTech-sponsored No. 79 to run in GTE-Pro with just two drivers. Given the circumstances, Bleekemolen and MacNeil did well to finish fifth in class. Bleekemolen and Keating will be joined by Marc Miller. Miller is a regular in the IMSA Continental Tire SportsCar Challenge, driving a Mazda MX-5 in the Street Tuner class for CJ Wilson Racing.

Riley Motorsports’ inclusion brings the number of American-based teams entered in this year’s 24 Hours of Le Mans to seven. In addition to Riley Motorsports, Scuderia Corsa is also in the GTE-Am class with a Ferrari F458 Italia with TUSC regulars Townsend Bell and Bill Sweedler. In GTE-Pro, Corvette Racing is bringing their two Corvette C7.Rs (No. 63 for Ryan Briscoe, Antonio Garcia and Jan Magnussen; No. 64 for Oliver Gavin, Tommy Milner and Jordan Taylor). P2 has the two full-time WEC entries for Patron Tequila ESM (Nos. 30 and 31), in addition to the full-time ELMS entry (and part-time in TUSC) from Krohn Racing.

The 24 Hours of Le Mans will be run on June 13-14.  TV coverage, as per the new American TV deal for the FIA World Endurance Championship, will be on the FOX Sports family of networks. – Phil Allaway

Even the crickets fell asleep for this non event. Like watching a high school pitcher mow down a little league team. Not even racing anymore. Thanks NASCAR!

the good news is that, based on attendance and ratings the number of insomniacs must be declining.

At the end of last year you would have expected Williams to be the major threat to Mercedes. Yet they seem to fallen fallen back. The gains that Ferrari has made, while not quite enough to match the Mercedes are truly surprising.
McLaren is slowly closing the gap although their reliability problems are a surprise given the money and experience of them as well as Honda..
And of course Manor while still off the pace got both cars to the finish yet again. Quite an accomplishment for a team we thought was gone 4 months ago.