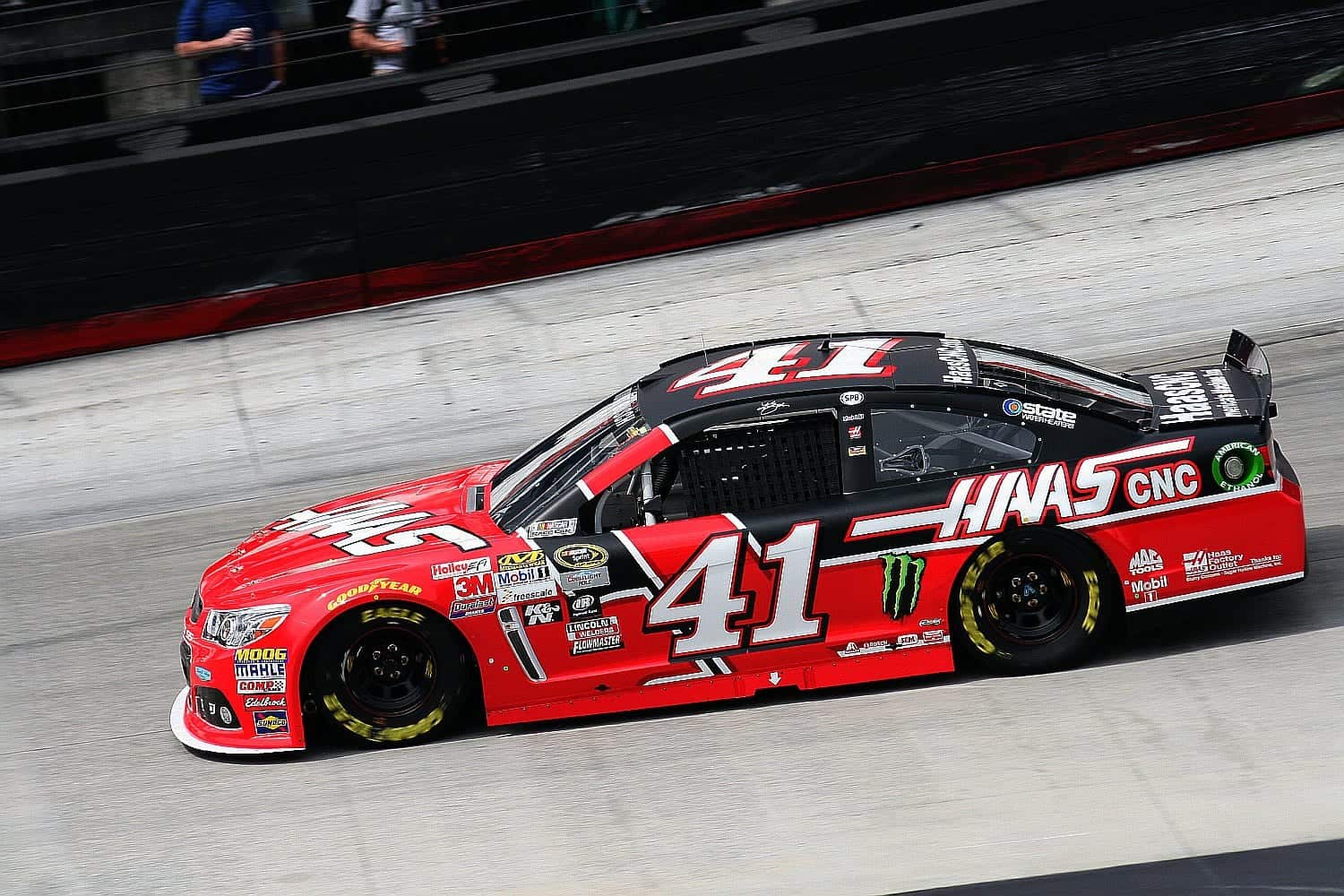 After just 22 laps of Sunday’s Food City 500, Erik Jones replaced Denny Hamlin in the No. 11. It wasn’t the debut of the Joe Gibbs Racing prodigy everyone has been expecting. No, most had been pointing to next month’s race at Kansas as the potential first time we get to see the wunderkind behind the wheel of a Cup car, most likely Kyle Busch’s Cup car.

So what happened? Hamlin had neck spasms flare up before the first red flag of the day came out. “I just pulled something in my neck to upper back about lap 12,” he said. The team tried to help Hamlin relax the muscles during the break, but were unable to do so. So Joe Gibbs Racing called Jones, fresh off a pole run and top-five finish in the NXS race the day before, and asked him to fill in.

“With this format, it’s all about winning, and there was no way I would have been able to go out there and compete for a win,” Hamlin said. “I think it’s just better to have Erik come here and run some laps, get used to these Cup cars. We know where he is going to be in a few years.”

There is no doubt that Jones will be winning Cup races in the near future, and if he continues his progression like he has in the last few years — beating Busch in the Snowball Derby, winning four Truck Series races, scoring three consecutive NXS poles and a win at Texas — he’ll threaten for multiple championships.

But what about the others?

Jones isn’t the only substitute driver turning laps in Cup this season. It’s been a bizarre year, really. Here’s the list of drivers who needed someone to fill in for them this year: Kyle Busch (injuries suffered during an NXS race at Daytona), Kurt Busch (suspension), Brian Vickers (heart surgery and recurring blood clots), David Ragan (subbing for Kyle Busch), Kyle Larson (dehydration), and Hamlin (neck spasm).

Those who filled in for these drivers have ranged from the expected (Regan Smith for Kurt Busch and for Larson at Martinsville) to the surprising (Joe Nemechek for Ragan at Front Row Motorsports). All of them are looking to make a big enough splash to get them into the Cup Series on a full-time basis for the first time or for another go around.

Let’s take a look at the substitute drivers and see what their chances are of scoring a full-time Cup ride or improving upon their current Cup ride.

Brett Moffitt (filling in for Brian Vickers and David Ragan)
Brett Moffitt shocked the NASCAR world with his eighth-place run, in just his eighth career start, in the Folds of Honor QuikTrip 500 at Atlanta. It wasn’t just a top 10; it was a top 10 on a day that saw just thirteen cars on the lead lap come checkered flag. It was the only scheduled start of the season for the Michael Waltrip Racing development driver, and he made the most of it. But a few days later FRM called. They wanted him to fill in for Ragan for the next three races.

Finishes of 37th and 32nd weren’t what he wanted to see in his first two runs with the team, but the following week Vickers announced he would be out with blood clots for the next three months. Moffitt was released from the final race of his contract with Front Row and headed back to MWR. He’s picked up the pace slightly since then, finishing within the top 30 in each race and scoring a 17th-place finish this last weekend in Bristol.

Moffitt’s Atlanta finish was fantastic, but it shows just how hard the competition is at the Cup level. One week you can be great, and the next week struggle to crack the top 30. Given the current state of MWR’s program, perhaps the top 10 was the exception and these middle of the pack finished the norm. Either way, team owners Michael Waltrip and Rob Kauffman have a driver for the future. With Vickers’s health issues unfortunately flaring up more often, it may be more likely we see Moffitt in the No. 55 rather than the third car MWR has been trying to find sponsorship to reestablish.

Matt Crafton (filling in for Kyle Busch at Daytona)
Crafton got the call to replace Kyle Busch with less than 24 hours until the green flag of the Great American Race. Normally driving for ThorSport in the Camping World Truck Series, it was Crafton’s first Sprint Cup start. He ran in the top 10 throughout the race and finished 18th after getting involved in the last-lap crash. The following week, it was announced that Ragan would be driving the No. 18 until Busch’s return.

For Crafton, making a Cup start was another accomplishment in a storied career. However, he’s made the most noise in the Truck Series, with over 400 Truck starts. He’s won the last two championships in that series and currently leads the points this season. Plenty of Cup teams could use his experience, but he’s stayed extremely loyal to his ThorSport team over the years. Will he eventually make the leap to Cup? If the situation is right, maybe. Otherwise, Crafton can be expected to continue running up front in the Truck Series fields each week.

David Ragan (filling in for Kyle Busch from Atlanta on)
Ragan has been around Cup for nine years already, so it’s somewhat surprising to find out he doesn’t turn 30 until December. In those nine years, he’s gone from Roush Fenway prodigy to seeing his ride shuttered to becoming a Cinderella winner at Talladega for FRM in 2013. Everyone was surprised when Joe Gibbs hired Ragan to race the No. 18, but they shouldn’t have been. Ragan has been fairly competitive in FRM Fords, helping the team progress nicely over the last three years, and usually takes care of his equipment.

With an average finish of 19.7, Ragan was sitting pretty at 10th in points until his wreck at Bristol dropped him eight spots in the standings. He finished fifth at Martinsville and has been at the top of the practice charts many weekends. When Kyle Busch met with the media last Wednesday, he said that Ragan “may not be lighting the world on fire, but he’s doing what he needs to do. The team is gelling every week. It’s a good time for the [No.] 18 team.”

What does Ragan need to do? Be competitive. Show some speed. Take care of the equipment. This helps both JGR make the most of the situation but shows that Ragan is as capable a racer he was during his good years at Roush. If he can do that, a full-time opportunity to move up in the Cup garage could be knocking.

Where could this come from? Both Chip Ganassi Racing and Stewart-Haas Racing have potential open spots due to free agency (Jamie McMurray and Danica Patrick, respectively). But perhaps the most interesting seat would be the rumored second car that Furniture Row Racing wants to start.

Regan Smith (filling in for Kurt Busch and Kyle Larson)
Smith is NASCAR’s super-sub. He’s stood by for Jimmie Johnson and Jeff Gordon, filled in for Dale Earnhardt Jr. and Tony Stewart in the past, and again this year for both Kurt Busch and Larson.

What has he done during his four starts this year? Finished 16th, 17th, 16th, and 16th. That’s some solid stuff right there, considering he’s had little experience in the new-generation Cup cars. With finishes like these and another solid year competing for the NXS title, he could easily be returning to full-time Cup racing in the next year or two. Like Ragan, Smith will probably gun for the CGR, SHR or FRR rides and may have an advantage over Ragan in that he is currently a Chevy guy and has run for all three teams in a substitute role or full-time role before.

Joe Nemechek (filling in for David Ragan at Atlanta)
I think everyone scratched their heads when Nemechek was selected to run the No. 34 at Atlanta. Nothing personal against Nemechek, but he hasn’t set the Cup world on fire since… well, his last top 10 was in 2007. Rumor sites were certain that Bobby Labonte would get the ride, so when Front Row Joe was announced – surprise (Though his longtime nickname was a perfect fit with his temporary team)! Nemechek ran respectably and ended up 33rd, seven laps off the pace.

For Nemechek, it was a good run. His recent Cup activity has been marked by start-and-parking, so to run the whole race, finish notwithstanding, was a refreshing throwback to his Hendrick and Petree days. Will it translate to a Cup ride in the future? Probably not. Nemechek has been focused on running/driving for his Truck Series team and helping his son John Hunter get acclimated to NASCAR racing.

Chris Buescher (filling in for David Ragan from Fontana through Bristol)
This was another surprising pick by FRM, but it actually makes sense. Buescher is a rising star in the Ford camp and is arguably the best NXS driver Roush Fenway has seen come along since Ricky Stenhouse Jr. Getting him some Cup experience not only will help his development along nicely, but extra racing, especially at the Cup level, should pay dividends down the stretch as Buescher battles for the Xfinity Series crown this year.

He scored a best finish of 20th at Auto Club and finished top 30 in his other three starts, right within the expected finishing position of an FRM Ford. He’s taking a week off at Richmond to focus on the NXS race, but I wouldn’t hesitate to put him back in at Talladega if I were team owner Bob Jenkins.

Will Buescher get a Cup ride in the future? You bet. Roush Fenway Racing hasn’t had much to celebrate this year. With Greg Biffle locked up for three years, and Trevor Bayne just getting a chance at a full-time ride, the quick choice would be for Buescher to replace Stenhouse if Stenhouse doesn’t pick up the pace this year. Or, if sponsorship is found, Roush Fenway could always go back to a four-car team. Time will tell.