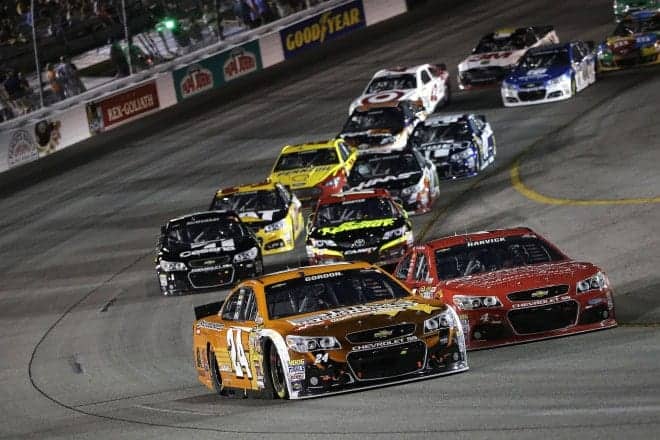 A week after their first win of 2015, Toyota is putting on their sponsor hat.

NASCAR has released the entry list for the April 25 Toyota Owners 400 at Richmond International Raceway (RIR). There are 45 initial entrants, meaning that two drivers will fail to make the race.

Toyota will have nine chances to earn back-to-back wins. Bristol winner Matt Kenseth will be back in his No. 20 Dollar General car, as will Denny Hamlin, who failed to return to his No. 11 Fedex car after rain delays at Bristol due to worsening neck spasms. Also returning will be Brett Moffitt, who continues to fill in the No. 55 Aaron’s Dream Machine Toyota for Brian Vickers.

Hendrick Motorsports will field five teams for the second time in 2015, fielding prospect Chase Elliott in his second race. Elliott previously competed at Martinsville Speedway, where he struggled to a 38th-place finish. He’ll continue to gain experience as he gears up to replace Jeff Gordon in the No. 24 next season.

Elliott, along with Camping World Truck Series veteran Ron Hornaday, will be forced to qualify on time to make Saturday’s race. Hornaday has attempted four races in 2015, driving for Sprint Cup Series newcomers The Motorsports Group.

Joey Gase will attempt to make his first start of 2015, driving the No. 32 Ford owned by Frank Stoddard Jr. Gase competed in four races in 2014, scoring a career-best 33rd-place finish at Phoenix International Raceway.

The NASCAR Sprint Cup Series will return to action at RIR on Friday for two practice sessions and Coors Light Pole Qualifying at 5:45 p.m. ET. Coverage for the Toyota Owners 400 will begin on Saturday at 7:30 p.m. ET on FOX Sports 1.