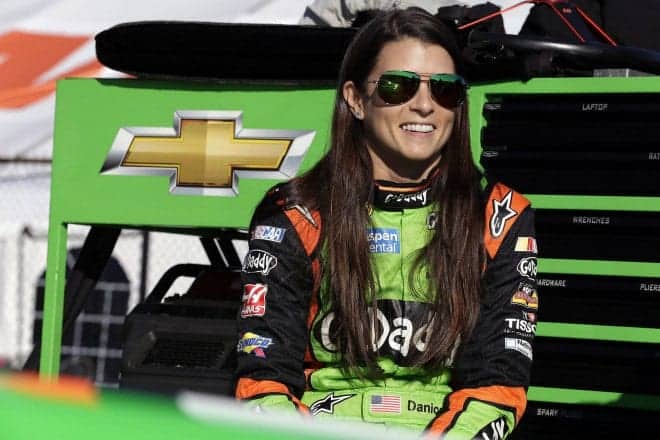 The definition of respect is “a feeling of deep admiration for someone or something elicited by their abilities, qualities, or achievements,” and this is exactly the feeling that I have for Steve Byrnes. Always the consummate professional covering the sport we all love, Byrnes was not just well-respected by NASCAR media, but by drivers, and officials alike. In racing, he was never afraid to ask the tough questions of drivers, and in life he was a family-man who everyone wanted to be around.

I never had the pleasure of meeting Steve Byrnes, but in some strange way, through being a part of the NASCAR community, following his career, and even seeing his posts on Twitter the last two years all throughout his heroic battle with cancer, I feel as if I knew him. He was someone you welcomed into your living room without hesitation when he appeared on FOX Sports 1’s RaceHub. He reported the stories he covered with class and a sense of humor, always going the extra length to tell the story.

There’s no doubt that the NASCAR community lost a good one in Steve. What we can all learn from Steve Byrnes and his battle is that cancer can’t define a person, and even all the way up to the end he fought and didn’t let cancer beat him. Not once. His passion for this sport will live on and hopefully inspire new generations of journalists and broadcasters to take the same road he did- the high one.

And with that, let’s dive into this week’s Mailbox questions…

Q: Hi Greg. On that last caution in the race on Sunday when Austin Dillon came into pit and the call was only for a splash of gas and go, Austin himself called for four new tires to also be put on, because in his words ‘we’ve got nothing to lose!’ What do you think happened there, and without hearing the in-car audio on the TV broadcast; does this happen a lot in the pits (Driver vs. Crew Chief calls)? – Darren K., Beaver Falls, Pa.

A: Hey Darren, thanks for writing in this week. The Food City 500 To Benefit Steve Byrnes and Stand Up To Cancer at Bristol was a great race, and Dillon and the No. 3 Dow Chevy SS was one of the race’s great machines. The situation that I think you’re referring to was on the last rain caution where Dillon was forced to pit due to engine overheating issues and needing fuel. While crew chief Gil Martin called for a splash of gas and go, Dillon wanted four new Goodyear Eagles as well, and with two laps remaining when the field went green again, there was little chance for him to make it to the front again. Thus taking new tires was definitely the right call.

Now, as Darrell Waltrip noted during the broadcast on FOX, car owner Richard Childress may have not been as happy as Dillon was on his last second call. Those four new Goodyears cost the team nearly $2,000 on one stop.

What happened on that stop was just a driver wanting more of the team when the race was down to the wire. Nothing really else to it. What was great about that was that the team, even though they weren’t prepared for the tire change, was actually able to turn it around and get him gas, tires and out on the track again within the normal time for a stop. Now, to your question if this sort of thing happens often on pit road during races, I have no real definitive data on this, but the driver certainly does sometimes make the call in terms of what he wants in the race. These types of situations need to be taken on a case by case basis however. With some tandems this could actually turn into a real problem with communication and who’s controlling the team. Dillon and Gil Martin don’t have any issues there, though.

Q: Greg, I’m a big Danica Patrick fan, and pretty excited on how she’s been running as of late. Her ninth-place finish this weekend at Bristol was great! What do you think is the secret with her good runs as of late, and do you think she’ll contend for a win this year? Thanks! – Kevin O., Pinellas Park, Fla.

A: Kevin, I appreciate the email. Patrick’s performance recently has been a real surprise. With the ninth-place finish she posted at Bristol, she actually made history by earning her second top-10 finish of the season in three races (seventh at Martinsville; ninth at Bristol), and her sixth of her career. That finish broke Janet Guthrie’s long-standing record of five total career top 10s by a female driver. But Patrick has made it clear before it’s not about setting or even breaking records for her; it’s about contending and winning in the No. 10 GoDaddy Chevy SS for Stewart-Haas Racing.

It seems that crew chief Daniel Knost, may have been taking notes that last few months from their fellow teammate in the SHR stable, crew chief of the No. 4, Rodney Childers. The same speed that he and Kevin Harvick have had in the No. 4 camp all season has transferred over to Tony Gibson, Kurt Busch and the No. 41, and now to the No. 10 machine too. Patrick is now on the best run of her career with seventh, 16th and ninth-place finishes in her last three starts.

For this weekend, Patrick heads into Richmond having made four career Cup stars at the ¾-mile track. And although she’s had great finishes at other short tracks this year, her best finish at Richmond is 16th. It will be interesting to watch Patrick progress running these types of track this weekend at Richmond.

I truly don’t understand the hype of this 9th place win. All races at some point somebody advances to attrition, just the name of the game. This person has been very lucky in that department with the help of the well timed “cautions” and lucky dogs, and waive arounds. Oh no..the big elephant in the room cheerleaders conveniently ignore. Given the craziness of that race and alot of good drivers were left in ruins, that is the only way to explain her and Ricky Stenhouse Jr. placing where they did. Do it more and do it often, actually “racing” you know, speed and quality passes, fending off another driver etc. Then we might talk. Until know this is just cheerleading from the feel good, everybody gets a trophy crowd. Remember if the name was Daniel this would be a non issue.

It obvious Danica can’t please the fools that bring up her name up every week and then complain that she gets too much coverage. Oh the irony. So instead of giving her credit for staying out of all those messes that happened in front of her, its all luck? Funny. Harvick & Logano and a few others couldn’t do it. Maybe they aren’t as talented as her. It takes more than luck to keep all 4 fenders on at Bristol, especially on Sunday with all the craziness going on.

Anyone who has seen Danica race an Indy Car knows she has talent. Its funny how nobody is crapping all over the Dillon boy for having mediocre runs in Cup so far in his career, despite the fact that he is a NW champion and came in with just as much hype. And yet he still doesn’t get the level of criticism that Danica does. Apparently you get a pass when you drive the 3 car and you driver for grandpa.