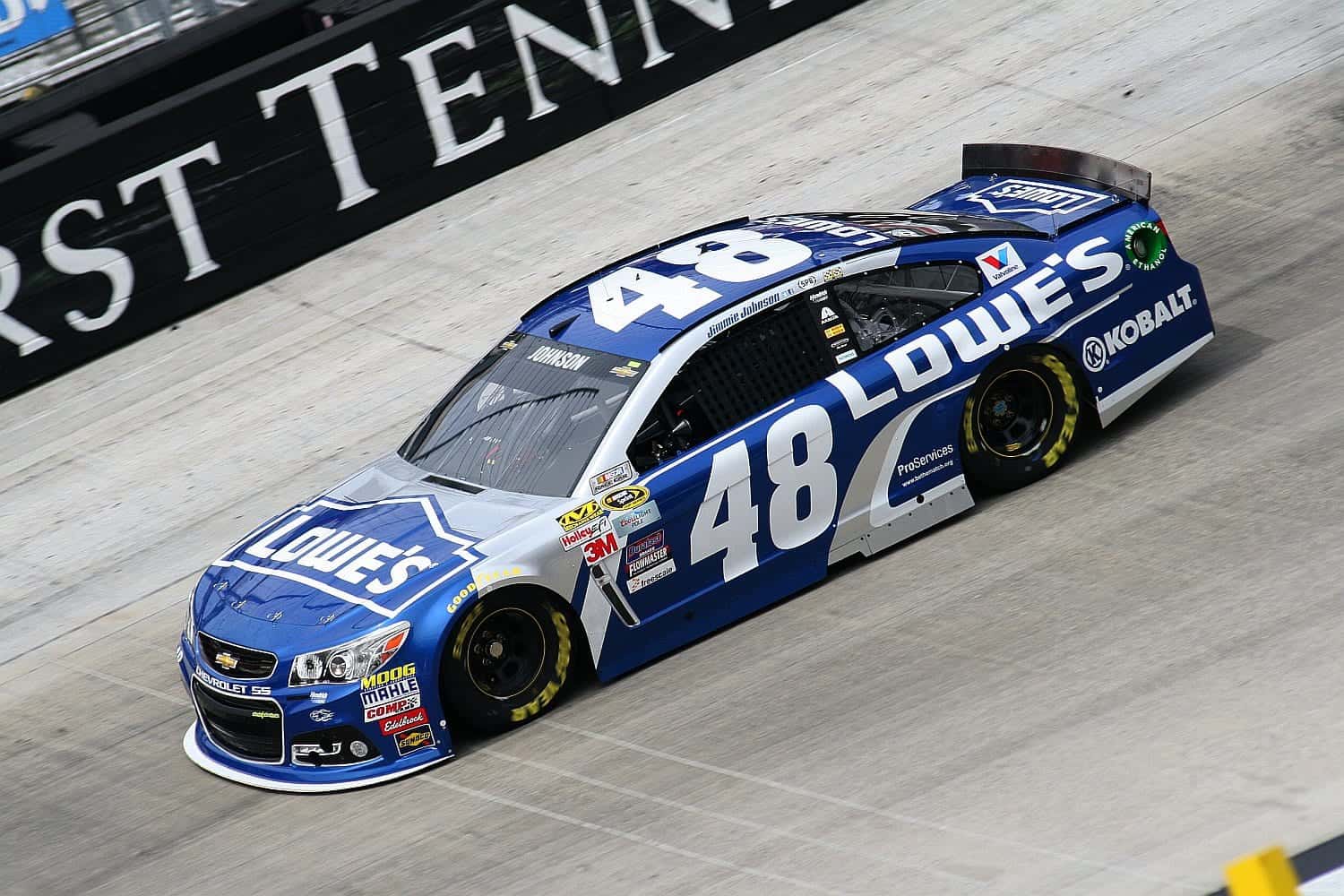 Welcome to the Frontstretch Five! Each week, Amy Henderson takes a look at the racing, the drivers and the storylines that drive NASCAR and produces a list of five people, places, things and ideas that define the current state of our sport. This week, you’re heard the old saying about lies, damn lies and statistics, but Amy says there are some numbers worth a closer look.

Winning races at NASCAR’s top level is incredibly difficult. There are 19 drivers on a full-time Cup schedule in 2015 who have never won a race. While that alone isn’t an indicator of those drivers’ talent or ability to win, it certainly puts into perspective how special a win at the Cup level is. Another number that speaks to this is 184; in nearly 70 years of competition, only 184 drivers can say they have wins at the top.

Looking further at wins, there are a couple of milestones that few meet. Only 30 drivers have more than 25 career wins; all but two of them are either still active, in the Hall of Fame or currently nominated for the Hall of Fame and awaiting final voting for 2016 . Double that number to 50 wins, and there are just 12 names on the list, 10 of them Hall of Famers. Just two active drivers, Jeff Gordon (92 wins) and Jimmie Johnson (72 wins) have reached that level of excellence. No driver since David Pearson has crossed the 100-win threshold, and Richard Petty‘s 200 mark is, for all intents and purposes, untouchable in the modern era. Of those 50-race winners, all but Junior Johnson, who never ran a full season, are champions, with 40 total championships between them. Eight have three or more titles.

Which brings us to another thing we can learn from the top win totals in the sport. There is much to learn about the sport’s history and racing in different eras from these numbers. Both Petty and Pearson won many of their races before the modern era began, in a time when drivers could choose from a number of races to enter and therefore cherrypick the tracks they preferred or where the competition was more likely to stay home. That’s not to take away from their impressive totals, because the sport and the rules were very different at that time.

On the other hand, a case can be made that the sport is more competitive than it ever was now, with just two active drivers above that 50-win mark and six others with between 25-49 wins. Of those six, only Tony Stewart is currently within shouting distance with 48 wins. Stewart is also the only driver with fewer than 50 wins to have won three titles. The era of drivers posting double-digit season win totals is essentially over; it may happen on occasion, but there are too many teams capable of winning for it to be a regular occurrence.

There’s an old adage in racing that says that in order to finish first, you must first finish. And it’s true. When evaluating a driver’s season, one thing to take into account is the races he did not finish, because those are generally an important piece of the puzzle. In a nutshell, if you have too many, winning a championship gets much more difficult.

Sure, it happens. A blown engine or getting caught in someone else’s issue; those things happen and it’s not really indicative of a driver’s performance. But three or four for mechanical failure and you’re looking at a team that might need to make some changes. A rash of DNFs for crashes? It could be an indicator of running mid-pack, where those things are most likely to happen.

On the flip side, look at a driver who’s running at the end of every race and you’ll generally see one who’s had a solid season and a decent points finish. It might not be a championship season, as it may mean they’re not taking a lot of risks, but it will most likely be a good one.

This one is especially true in NASCAR today as the field is ultra-competitive. There are more than 10 teams capable of winning many weeks, and a top 10 is a decent accomplishment. For teams on the rise, it’s a good number to compare from year to year. An example as 2015 unfolds is Martin Truex Jr., who finished in the top 10 in each of the first seven races this year… twice more than in all of 2014. Truex is third in points and the team is obviously cohesive and overall much stronger than a year ago. They haven’t won yet, but the top-10 streak is evidence of their improvement and that they’re consistently able to be competitive. Overall, top 10s are a good indicator of what a driver’s year was really like.

The number of bonus points a driver earns is also a good indicator of how competitive he really is. They’re given for winning, leading a lap and leading the most laps during a race. Added together, they’re a good gauge of a team’s strength. Along with the total number of laps led, the number is especially helpful. A driver can lead laps in multiple races, but if he’s led them by staying out under caution, for example, that could indicate he’s not as strong as a driver who’s leading lots of laps. On the other hand, it could mean he’s able to run well at a variety of tracks instead of leading lots of laps at one type of track but not being strong at others. It depends. Overall, though, if a driver is racking up bonus points, he’s running well.

The total number of wins a driver has is important – that’s already been covered. But when looking at a career, the winning percentage – the percent of races run that a driver has won – is an interesting number. In general, it’s easier to have a high winning percentage in a small number of starts and more difficult to maintain over time. A double-digit career percentage is impressive indeed. Winning 10% of races averages out to three or four races a year, perhaps more in the pre-modern era days when the season was longer. Those numbers will put a driver in title contention if he’s also consistent.

Historically, the drivers with the top winning percentages read like a who’s who in stock car racing, with many either in the Hall of Fame or on the ballot. Herb Thomas tops the list with a percentage of 21.053; that’s 48 wins in 228 starts. The sheer length of his career makes Petty’s 16.892 percentage impressive, though imagine what it might have been had he not hung on for quite so long. The same goes for Darrell Waltrip, who still ranks in the top 20 with over 10%.

Among active drivers, two are in the top 20 all-time in the winning percentage department, and it shouldn’t be a surprise that they’re Johnson and Gordon. Johnson’s 15.031 trumps Gordon’s 11.964 despite Gordon having 20 more wins because Johnson’s 72 wins have come in a relatively short timespan. This number, along with career wins, is a solid way to read a driver’s career.