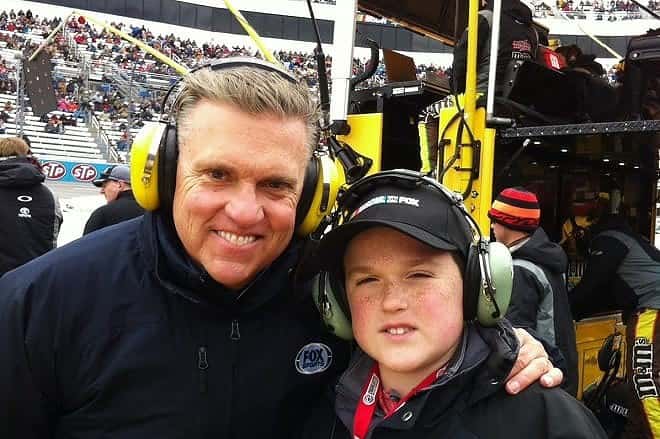 Editor’s Note: Normally this space is reserved for some of the greatest tweets to come out of NASCAR over the previous seven days, but in light of Steve Byrnes’s passing Tuesday, we’re forgoing the usual lineup to feature the love and support the motorsports community has shown in his memory. The usual format for Tweet ‘N’ Greet will return next Wednesday.

Thanks to all for a remarkable day, my teammates @NASCARONFOX. Miss you all. Thanks for your love. @SU2C @nascar and @BMSupdates. #1Fans!

Sometimes life blows my mind. The fact the very last race Steve Byrnes watched in this life was dedicated to him, makes me smile. #NASCAR

Been dreading this day for a while. Love you @SteveByrnes12 You will be missed. Prayers for Karen and Bryson.

We mourn the loss of @SteveByrnes12 with the rest of the @NASCAR community. A great loss to the world. Rest well, Byrnesy, you earned it.

Our thoughts, prayers, and deepest sympathy goes out to the Byrnes family. We will miss you, Steve.

It's a sad day for the #NASCAR community. RIP @SteveByrnes12 #ByrnesStrong

"Be present. Be grateful for this day and for what you have." a quote from @SteveByrnes12 who returned home too soon. God Bless & RIP.

One of those times when thoughts and prayers just aren't enough. May love carry the Byrnes family through the time ahead. #ByrnesStrong

Our hearts are heavy. Please please pray with us for @SteveByrnes12's family; that God's joy, love, peace & strength would be their embrace.

What a send off the #NASCAR family gave him though. #ByrnesStrong #🔥💪

Glad so many of the @NASCAR Community pulled together to support him and his family in his battle. He will be missed.

I wish I had the honor to know #SteveByrnes, his strength and kindness are lessons we can all take with us and apply each day. #ByrnesStong

My love hugs and prayers are w/ @KarenByrnes & son Bryson. Heaven gained an awesome person too soon. So many memories. #ByrnesStrong

You were a friend to many and you set the pace of what reporting of our sport should be like. #GodSpeedSteve #SteveByrnes #ByrnesStrong

Steve Byrnes was my window to NASCAR in the early 90s when he hosted IWCR; an inspiration to get involved with the sport – RIP#ByrnesStrong

Very sad to hear about our friend Steve Byrnes passing today. Huge loss for our racing family. He was one of the best ever! We will miss you

Rest in peace my friend @SteveByrnes12 Such a wonderful man that always had a smile on his face. Prayers to all of his family. #ByrnesStong

Hard to put into words losing someone who taught me so much. My heart breaks for Karen & esp Bryson. Heaven gained a good one.#ByrnesStrong

There is no amount of words that could express how much my heart is aching. All I can say is Steves legacy will never be forgotten. #hero

So sorry to hear about Steve, my thoughts and prayers go out to his family.#ByrnesStong

My hope is Steve was able to see how much he was loved & appreciated by so many. Rest easy friend. Prayers to his family. #ByrnesStrong

@maxinem I went the distance

From all of the love being shown in the tweets above, it is clear that Steve Byrnes was one of the most loved and respected individuals around the NASCAR industry. He, his dedication and spirit, will truly be missed. The entire Frontstretch staff sends its well wishes to the family as they mourn the loss of a husband, father, brother, uncle and son.

Previous NASCAR on FOX’s Steve Byrnes Dead at 56
Next Open-Wheel Wednesday: Taking Stock of the 2015 IndyCar Season After 3 Races