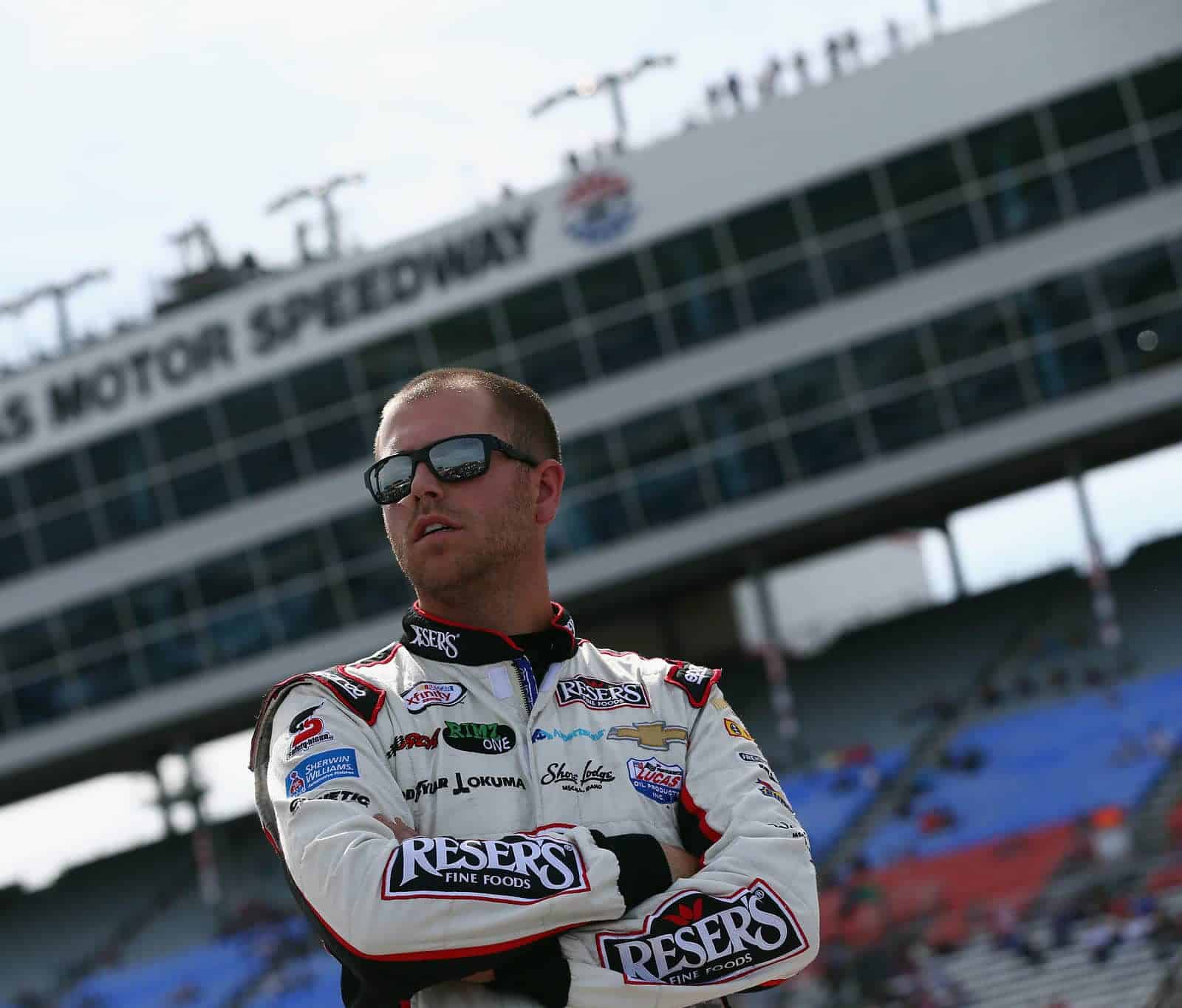 Seven races into the NASCAR Xfinity Series season, the battle for the championship is coming into fruition. Though the NASCAR Sprint Cup Series drivers continue to dominate the sport’s version of AAA in baseball, the top-10 drivers are separated by a mere 56 points heading into Richmond.

Following Chase Elliott‘s outstanding rookie season, which led to him bringing JR Motorsports a championship, he has experienced some growing pains with his new crew chief, Ernie Cope. Roush Fenway Racing’s Chris Buescher and Richard Childress Racing’s Ty Dillon have taken advantage of Elliott’s minor lack of speed on race day, and they are tied atop the standings heading into the .75-mile track.

However, veterans Regan Smith and Elliott Sadler are still searching for their first title, and are starting to heat up. But the two elder statesmen within the Xfinity Series have yet to show their full potential, especially with young drivers already finishing inside the top five on a weekly basis.

Let’s take a look how each of the drivers inside the top 10 in the standings are doing heading into Richmond:

1. Chris Buescher: The driver of the No. 60 Ford entered his second full-time season with high expectations, and so far, he has shown why Roush chose him to pilot the car. He has an average finish of 7.3 this year and four top fives, along with five top 10s. Buescher hasn’t led any laps since Daytona, but finishing on the lead lap in each race besides Las Vegas is reason to make him a title favorite early in the year.

2. Ty Dillon: Following in his brother’s footsteps, Dillon has excelled at the intermediate tracks in the Xfinity Series. He has been exceptional during the races this season, but his qualifying has suffered immensely. Last year, Dillon had an average qualifying position of 9.5, yet that has decreased to 18.6 in 2015, which is the worst out of any driver inside the top 10 in points.

3. Chase Elliott: After a wreck at Daytona, Elliott has rebounded rather well for JRM. Earning a top 10 in each race since the season-opener, he has jumped inside the top five in points, with three top-five finishes. However, Elliott hasn’t shown the speed that he had early in his championship year, which should be somewhat of a concern thus far into the season for him. He has been seen running toward the latter part of the top 10, and even outside of it during long runs as he searches for his second consecutive title.

4. Darrell Wallace Jr.: During the off-season, there was a lot of speculation on what Darrell Wallace Jr.‘s plans would be for the 2015 season. Joining Roush Fenway Racing, he has run better than two of his teammates through seven races, with an average finish of 10.7. Considering he had limited experience in the Xfinity Series entering this year, Wallace is over-performing, especially with a brand new team. He has a pair of top 10s, and ran up front for the majority of the race at Auto Club Speedway, which showed he is going to be contending for wins rather soon.

5. Ryan Reed: One way or another, Ryan Reed is barely hanging onto a spot inside the top five in points. Besides his unexpected victory at Daytona, he has struggled to contend for top 10s, which was the case in his rookie season. While his 13.1 average finish isn’t bad by any means, the only race in which he showed potential was with a top 10 was at Fontana, but he fell to 11th. Bristol was expected to be a solid race for Reed, especially since it was his fourth start at the track. However, it ended up being his worst performance of the year, finishing 21st, six laps down.

6. Elliott Sadler: After a rough start with his new team, three-time Cup Series winner Sadler has worked his way near the top five. Known for consistency, he has been known as a driver that races within the top 10 since he joined the Xfinity Series full-time in 2011. However, with his worst start since then, Sadler’s 13.3 average finish will not get him a championship, and he will need to pick up the pace. With three straight solid runs, he is on the edge of showing he has a team caliber of finishing in the top five, which is what he needs to show quickly.

7. Brendan Gaughan: After winning a pair of races last season, Brendan Gaughan likely has a similar goal for 2015. After nearly winning at Fontana, the driver of the No. 62 car is outrunning his teammates every now and then, and that’s what he needs to do. However, inconsistency has plagued Gaughan in the past, and three finishes outside of the top 10 has hurt him in the standings. But when he doesn’t have any trouble during a race, he has been one of the front runners, which is why he is expected to climb through the points over the next few weeks.

8. Regan Smith: Two finishes outside of the top 30 has put Smith in a bit of a hole. But aside from issues at Daytona and Bristol, he has run just as well, if not better than his teammate. With a pair of top fives and five top 10s, Smith has gotten off to a solid start. However, he will need to continue to run inside of the top five on a weekly basis if he wants to make up his 47-point deficit.

9. Brian Scott: Having a lot of speed is part of the battle, but fighting off tough luck is the majority of it for Brian Scott. After showing potential to compete for victories at Las Vegas and Phoenix, the No. 2 team experienced engine issues throughout both weekends. Las Vegas was brutal for Scott, and it has dropped him to ninth in points even though he has led 26 laps this year, which is the most of any driver inside the top 10 in points. However, with potential to go full-time in the Cup Series next year, winning a race and finishing inside the top five in points for the second straight year is probably what Scott will have on his resume by Homestead.

10. Daniel Suarez: Joe Gibbs Racing’s rookie sensation Daniel Suarez is starting to come on strong. A few runs outside of the top 10 to start the season has led to some rather solid results now that he is adjusted to the Xfinity Series. Suarez finished runner-up at Bristol, and has an average finish of 15.1, which is not too bad considering prior to this season, he had just a pair of starts in the division.

Oh, oh, I love make pretend! Let’s pretend that the driver who has the most 6th place finishes behind the Cup Clowns is the Champion of this Cup sparing session masquerading as a racing series. Oh, and while we are at it let’s pretend the anyone continues to watch this farce.

Now JohnQ, please don’t hold back and make us guess. Tell us how you really feel? ;)

I still like watching the Xfinity series. Would I prefer the Cup guys didn’t come down often? Yes. I’d like at least half the races to be Cup-driver-free, if not all. But, many of the Xfinity drivers have said over the years that they like having the Cup guys there to measure themselves against them. Especially those that intend to move up to Cup.

The great thing about this series is that it often has the best racing of the weekend and you get to see up-and-comers competing with each other. Watching the new drivers develop their skills is fun for me. The same reason I watch the truck series.

If I bought tickets for , (or,was just gonna watch on TV) – an Ohio State vs Michigan college football game – I’d be expecting to see a spirited, hi intensity competition among relative equals, and anticipating a great, fun experience.
BUT—after being advised that Tom BRADY (now at the TOP PROOOOOOFESSIONAL level of the sport) – was gonna –DROP BACK DOWN AFTER GRADUATING and play quarterback ( driver) for Michigan, – that would OBVIOUSLY make the contest WAAAY less competitive, interesting, and desireable to care about.
NOW – I ALSO find out that – he’s going to bring along his ENTIRE offensive line and backfield from the Patriots ( aka- CUP pit crew members and support staff) – – along WITH — Belicheck as head coach ( owner and Cup budget, equipment etc ) – – NOW – – …. am I supposed to fight the traffic and crowds sit there and expect to see an interesting contest -and wonder —WHO might WIN – – DUH
Am I supposed to sit there ( or watch on TV) because a —“STAR” is pretending to “compete” (with a decidedly UNFAIR advantage) in a lower class, just to feed his ego ??
NO – You See – I am NOT a “Kardashion loving, drooling CELEBRITY fan” – – I am a FOOTBALL fan – a RACE fan – Who just wants to see COMPETITION – not EXHIBITION !!
I will NEVER understand what is so exciting or “REWARDING” about watching something like – Mike Tyson beating up Justin Beiber – who ARE the people who think that’s an “accomplishment” ???