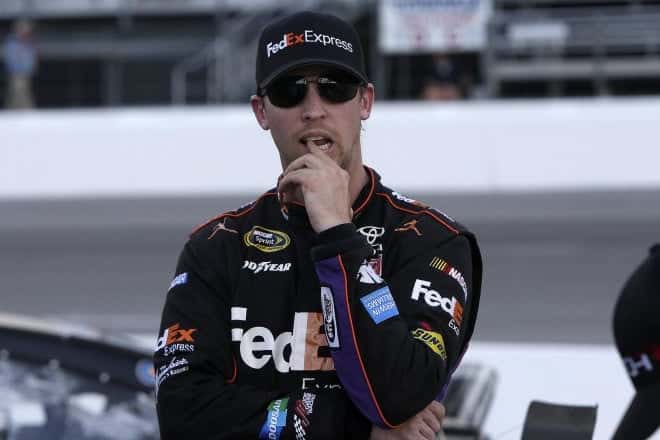 Just a few hours after hosting a short-track race, Denny Hamlin led the way during practice for the NASCAR Xfinity Series at Richmond. Putting down a lap time of 21.626 seconds, the No. 20 car had a 0.071-second advantage over last weekend’s winner, Joey Logano.

Making his first start at Richmond in the series since 2012, Hamlin is searching for his third victory at the track. After making four starts in the No. 54 car for Joe Gibbs Racing, he has swapped over to the car usually driven by Erik Jones, who scored a win at Texas. Jones will instead drive the No. 54.

Austin Dillon, Aric Almirola and Jones rounded out the top five, with Regan Smith being the quickest out of the drivers running full-time in sixth. Kevin Harvick, who won last year’s race at Richmond, was eighth quickest in practice. Mike Bliss piloted his No. 19 car for TriStar Motorsports into ninth as he is still searching for a finish better than 20th.

Hamlin also posted the quickest 10 consecutive-lap average, with a speed of 121.934 mph. Smith, Logano, Chase Elliott and Landon Cassill rounded out the top five in that category. Championship leaders Chris Buescher and Ty Dillon were 10th and 12th, respectively, on the 10-lap average.

Attempting to make her first Xfinity Series start since 2013, Johanna Long was the slowest of the 42 cars for Mike Affarano Motorsports.

Qualifying for the Xfinity Series will take place at 3:45 p.m. ET, with the race schedule to take the green flag after 7:30 p.m. on Friday evening.

oh look, a cup driver is quickest in practice of a LOWER series.

Do they have a backup driver lined up in case Denny gets a boo boo?

He’ll pull himself from the car if he doesn’t win the pole.