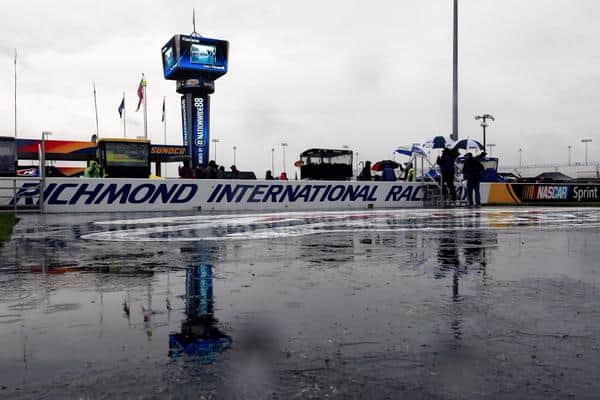 For the second weekend in a row, rain mars the Sprint Cup Series weekend.

Like many expected, the Sprint Cup Series Toyota Owners 400 at Richmond International Raceway has been postponed due to persistent rains throughout the day. Originally scheduled to take place Saturday evening at 7 p.m. ET, the ninth race of the Sprint Cup Series season will now be held at 1 p.m. ET Sunday.

Television coverage will remain on FOX.

The Richmond area has had rain throughout the day. In an attempt to try to get the race started, NASCAR moved up the start of the race by 10 minutes, but eventually made the decision to postpone the event roughly an hour before the scheduled start.

When the green flag waves, defending Richmond spring winner Joey Logano will lead the field to the start, alongside Friday night’s Xfinity Series Richmond winner Denny Hamlin. Chase Elliott, making his second career Sprint Cup start, will start 16th. Jeb Burton, who failed to qualify for the race on Friday, will replace JJ Yeley in the No. 23 BK Racing Toyota.