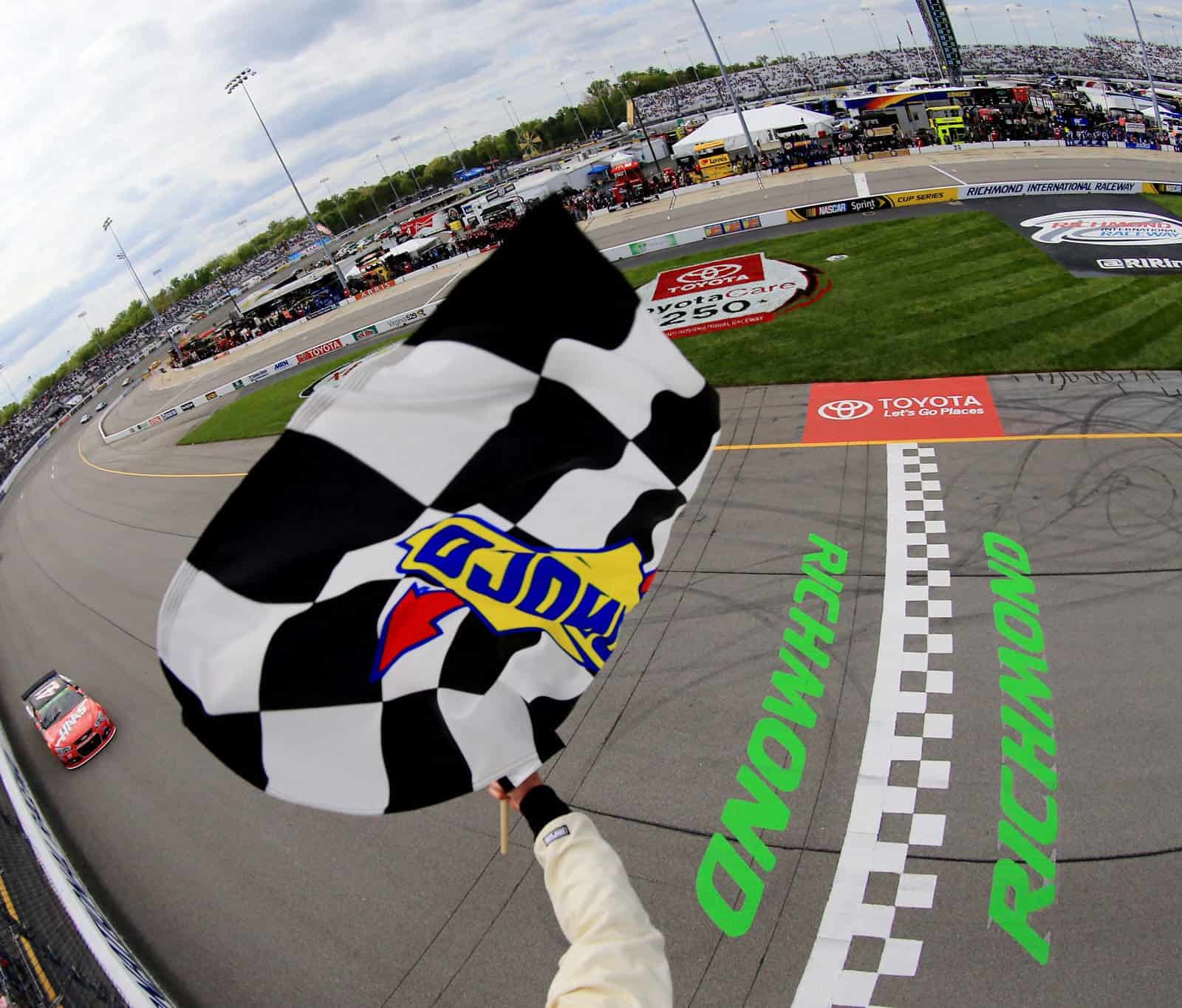 Kurt Busch’s win at Richmond came with a lot of, well… baggage.

You see, Busch isn’t necessarily the most popular person outside of NASCAR. Following domestic abuse allegations from ex-girlfriend Patricia Driscoll, Busch was suspended for the first three weeks of the season after a family court in Delaware ruled it was “more likely than not” that Busch committed said domestic abuse.

However, once the courts decided that there was not enough evidence to pursue criminal charges, NASCAR re-instated Busch and he returned to the track for the fourth race of the season at Phoenix International Raceway.

However, Busch has never been fully cleared in the court of public opinion. Because of the nature of the allegations, domestic abuse disputes swirling around in other mainstream sports, and Driscoll’s willingness (or desire, depending on who you ask) to share her story made this more than just a motorsports-isolated event. Juicy headlines filled TMZ and various other websites and even non-sports related programming ran the story and conducted interviews.

Now, the well-intentioned and true statement regarding criminal allegations is “innocent until proven guilty.” However, we know that’s never actually the case. In the court of public opinion, it’s the exact opposite at best. Even more commonly, it seems the answer is “guilty if accused,” regardless of what the final verdict is.

With Busch that was certainly the case and remains so even within the motorsports realm. Social media, chatrooms, forums – basically anywhere fans gather online to talk racing – always seem to be filled with a handful of people who still see Busch as a woman-beater. Someone who got away with a crime just because he is a famous athlete. A step backward in the fight to end domestic violence.

Now, this is hardly a case in which fans are united. Yes, there are those to whom Busch will always be guilty of the things he was accused of doing. For many others, though, they feel some sympathy for Busch. If he truly was innocent, his name was dragged through the mud and he was forced out of racing for something he never did. In fact, I was personally rather surprised at how many people expressed support for Busch and his ability to bounce back from what should have been a rather large setback. Now, of course, that wasn’t the attitude entirely but the positive side existed in a much larger capacity than I would have imagined.

Before I go any further, I am not saying I think Busch is innocent or guilty. I don’t truly know what transpired between the two of them in the moment that seemed to be the catalyst for all of this. You don’t truly know what happened either. None of us do. But it seems that enough have been able to form an opinion to decide whether or not they will support Busch now that this incident is behind him.

Again, though, that’s just within the racing community. Based on my own observations, it appears that most within NASCAR have accepted the courts’ decision and support Busch as he continues to move forward. That of course is not a unanimous declaration by any means, but it seems the scales are tipped ever so slightly in that direction.

Outside of motorsports, though, is very different. Our culture, often built by the media, is very good at creating good guy vs. bad guy scenarios. Hero vs. villain. David vs. Goliath. And on and on. And in issues of domestic abuse, the “bad” side is always the abuser, as it should be… if it’s warranted. Since we can only form our own opinions of what happened based on each individual testimony, that leaves the decision up to literally anyone who comes across the story. And outside of racing, you can guarantee that the anger was more automatically directed at Busch. He was accused of domestic abuse, had only a brief suspension, was allowed to continue racing afterward, and was successful in doing so. What message does that send to abusers, some might be asking?

Despite the fact that this might seem to be a public relations nightmare for NASCAR, I really don’t think it should be. Yes, domestic abuse is an ugly, disgusting, horrible – yet still very real – tragedy that occurs every day. No, it should not be tolerated or accepted in any capacity. However, there also can’t be a precedent set where a person is considered guilty whether there is any actual evidence or not. Sure, it might be a hard thing to prove at times, but “innocent until proven guilty” must still reign supreme. Creating victims of the judicial system because they are wrongfully accused by a scorned “ex” is not the right answer either. I’m not saying that’s what happened here, and I’m not saying it wasn’t. I’m simply stating that there must be a balance between the no-tolerance policy that every sanctioning body should have in place and the domestic abuse allegations that have no substantive evidence. And the balance, for now, is the legal system.

For that reason, that’s why I still believe NASCAR handled the entire course of events correctly. When someone in the legal system decided that it was “more likely than not” that Busch had committed an act of domestic abuse, they had to respond with the suspension. When it was determined the court system could go no further, NASCAR responded again by allowing Busch to come back. They followed the lead set by people in positions of authority until the matter was settled, and that’s the way it should be. That way, the blame rests on the legal system on not on the sanctioning body.

Unfortunately, there are those who believe “once accused, always accused” and will always see Busch in that more negative light. And having “Kurt Busch Wins” as a headline could be a terrible thing for the sport.

Or not. See, NASCAR did everything they were supposed to do and Busch followed the steps he was supposed to take both in the legal system and with the sanctioning body. The matter is over, done with, and settled. And I think it’s only fair and right that they stand by those decisions. Oh, sure, it’s easy for mainstream influencers to make a tragedy out of the situation and de-cry NASCAR’s decision to allow him to come back.

However, Busch’s continued success (more than likely, this will not be his only win of the season) need not be an issue NASCAR needs to hide or shy away from. Despite the naysayers, the sport can still take a stand against domestic abuse and allow Busch to race. Those two things don’t have to be mutually exclusive or contradictory.

And since when has the mainstream anything been able to figure out this sport or what it stands for anyway? They can’t even spell “Jimmy” Johnson’s name right. And Danica Patrick is the only driver they can name immediately.

Regardless of your stance on Busch and what you think really happened, I think the frustration that NASCAR made the wrong call in how they handled the whole situation is without standing. Any opposite reactions either way would have really sent the wrong message. At least now they have a decision to stand behind, which means everything should be mostly normal from here on out.

Or, at least as normal as normal can be for a Busch.

16 thoughts on “Up To Speed: Kurt Busch Success Bad For the Sport?”