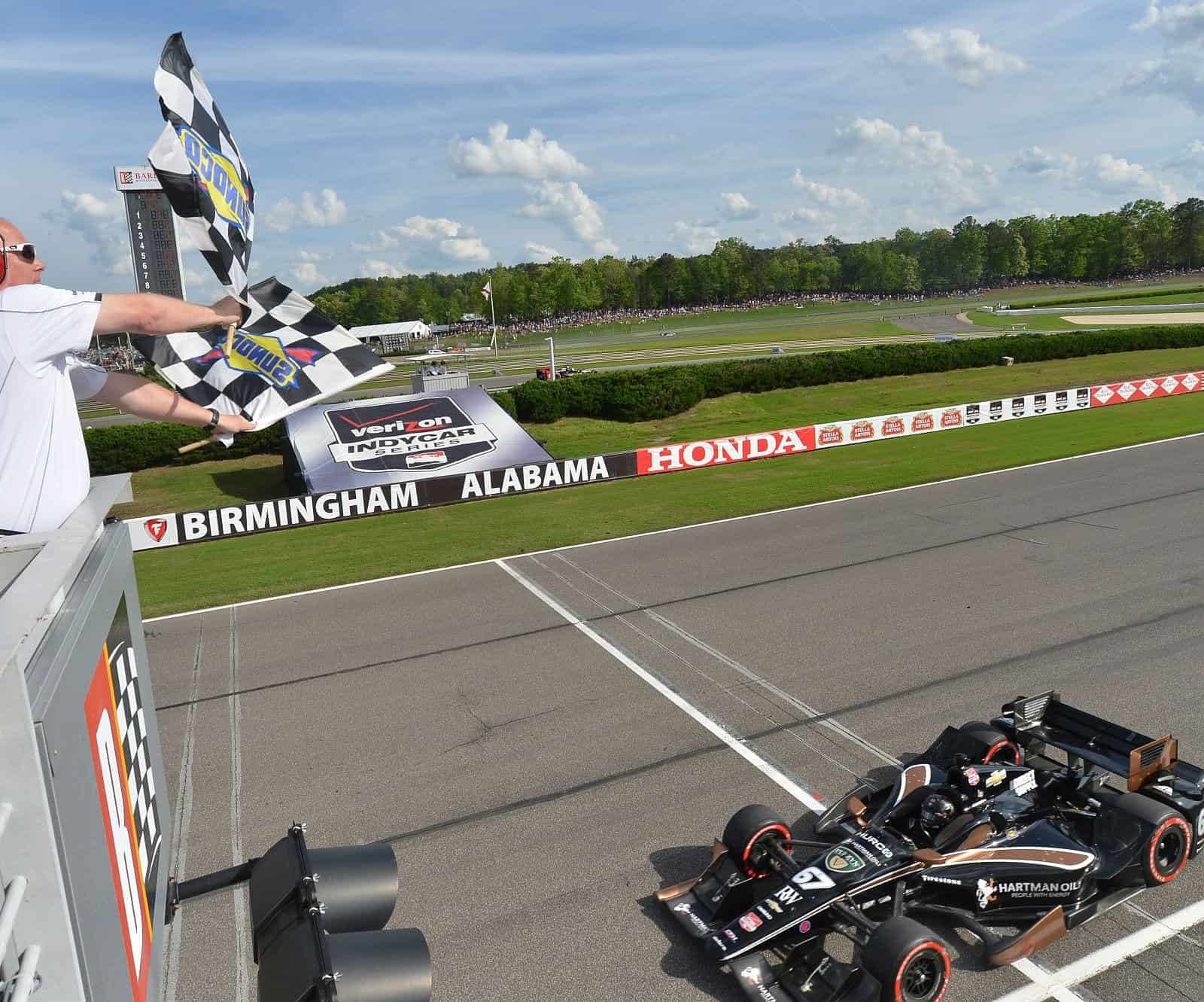 Here’s a quick look at the Honda Indy Grand Prix of Alabama.

How it happened: Newgarden passed Helio Castroneves for 10th on a lap 40 restart. At the time, it didn’t seem to matter all that much, but the race remained green for the remainder of the race, transforming the event into a tire and fuel management affair.

Rahal was the last driver to pit on lap 70, cycling the lead to Newgarden for the final time. The Tennessee native managed a seven second lead to Dixon while Rahal charged from sixth to second, overtaking Dixon in spectacular fashion on the final lap.

Newgarden started in the fifth position but picked off three cars on the first lap and was running second when he cycled back to the start-finish line. He says his aggressive start set the tempo for the remainder of the race.

“It was critical,” Newgarden said. “You don’t mess around in the IndyCar. “If you’re not on your game you’re going to get swallowed up quickly. And today, I wasn’t looking to take it easy.

“Early in the season you can settle in and just chase points and get comfortable but from the start, I wanted to just go and make it happen.”

A Chevrolet driver won the race but Honda appeared to make gains – at least on the scoring pylon. On one hand, Rahal finished second with Ryan Hunter-Reay, Carlos Munoz, James Hinchcliffe and Marco Andretti all posting top-10s.

However, Munoz cautioned reservation in reading too much into the results from Alabama.

“It was all strategy,” Munoz said. “In this series right now, Chevrolet is certainly better than everyone else and you see that in qualifying.”

It’s worth noting that the four fastest laps of the race were all posted by Honda drivers.

Defending champion Will Power was penalized on lap 19 for a pit exit blend-line violation that resulted in contact with Takuma Sato. Power went from fourth, prior to the pit stop, to dead last after serving his penalty. However, he remained on the lead lap and was able to battle his way to fourth by the finish.

What it means: Much is made about the need for IndyCar to feature successful young Americans to reenergize interest in the oldest form of racing in the country. On Sunday, they received it in spades with twentysomethings Newgarden (24) and Rahal (26) taking the top two spots with the Month of May and the 99th Indianapolis 500 looming on the horizon.

Even 34-year-old Hunter-Reay, the defending Indy 500 champion, joined in on the American Renaissance in the Heart of Dixie.

Penske Stiffled: For the first time this season, Team Penske was denied a podium finish for any of their four Chevrolet entries in an IndyCar Series event. Power rallied to fourth while Pagenaud could do no better than ninth. Late-race pit stops forced Juan Pablo Montoya and Castroneves to 14th and 15th respectively.

What’s next: The IndyCar Series next competes on Saturday May 9 on the road course at Indianapolis Motor Speedway in the second-ever Angie’s List Grand Prix of Indianapolis. Pagenaud is the defending race winner.

What great drives by Josef (not Joseph!) Newgarden and Graham Rahal! It was by far the best race of the season and a lot of fun to watch.

Steve B
Reply to  DeniseW

Excellent race, best road course race in awhile. The charge by Graham at the end was great racing.