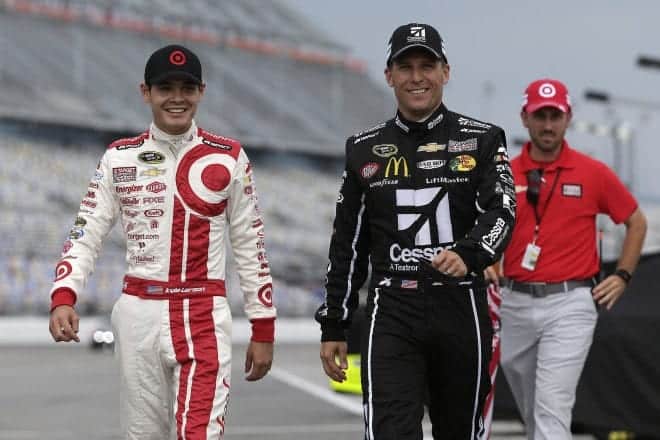 Did You Notice? That Chevrolet returned to form at a track that they’ve been weak at in recent years? The manufacturer owned the Virginia half-mile from 2006-2008, winning six straight races behind the dominance of drivers like Jimmie Johnson and Kevin Harvick. Yet amazingly, Chevrolet has been dominated by Ford and Toyota in recent years.

Toyota took over Richmond from 2009 through 2012, winning seven out of eight races with Joe Gibbs Racing drivers Kyle Busch and Denny Hamlin. Ford followed suit with three wins of their own from the fall of 2013 through last September as Carl Edwards and the Penske teammates of Brad Keselowski and Joey Logano all found their way to Victory Lane.

During that six-year period, Chevrolet found victory lane only twice, both times with Harvick. So it came as a surprise when Kurt Busch led a group of four Chevrolet drivers atop the charts on Sunday, combining to lead 297 laps along the way.

As Clayton Caldwell wrote in last week’s column, Chevrolet has been struggling at short tracks this year. It’ll be interesting to see if they can maintain this dominance when NASCAR returns to a half-mile again at Bristol this August.

Did You Notice? Jamie McMurray leading the way for Chip Ganassi Racing? Jamie Mac was the hottest driver in NASCAR back in 2010, when he won both the Daytona 500 and Brickyard 400, but has only one win and zero appearances in the Chase for the Cup in the four seasons and change since.

Hotshot Kyle Larson‘s rookie campaign had fans and analysts alike marking him as the driver to watch for Ganassi this season. Larson was predicted to win races, earn a Chase bid, and potentially even win the title. However, a lackluster start to 2015 and missed race due to dehydration has left Larson with only three top-10s and a subpar 20th-place standing in points.

While Larson has struggled, McMurray is having one of his best seasons yet. His two top fives and 15.0 average finish position are the best he’s had since a stellar 2004 campaign that saw him end the year 11th in points. His ninth-place rank in series points is the highest he’s ever been at this point in the season.

McMurray’s early success can be attributed to two things: qualifying and consistency. Typically a poor qualifier, McMurray has qualified at an average place of 11.7, nearly two positions higher than his career-best 13.4 in 2010. McMurray has also been smooth, bringing home seven lead-lap finishes in nine races. If he can keep that pace he’s projected to end the season with 28 lead-lap finishes, a career-best.

McMurray has never made the Chase. However, he’s sitting in ninth as the field heads to the site of his last win. The odds look good for 2015 to be the year he finally goes to NASCAR’s playoffs.

Good for you for the tacit admission that Kyle Larson may have been a teensy bit over hyped by Frontstretch staff last year.