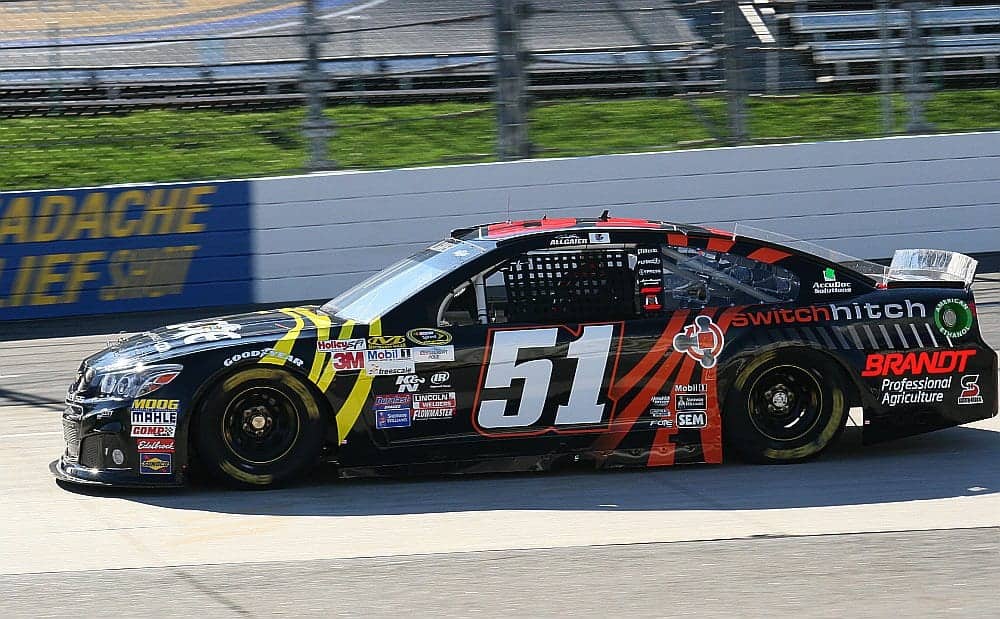 On Tuesday, HScott Motorsports announced an expansion of their relationship with the Fraternal Order of Eagles (F.O.E). The F.O.E. will serve as the primary sponsor of the No. 51 Chevrolet SS driven by Justin Allgaier in two races this season. The first of those will be the Spongebob Squarepants 400 at Kansas Speedway in May. The other will be at Kentucky Speedway in July. In addition, the F.O.E. will serve as a co-primary sponsor for three additional races that will be announced at a later date.

Team owner Harry Scott Jr. is very happy to see the FOE expand their role with the team.

“I am proud to have Fraternal Order of Eagles as part of our family at HScott Motorsports,” Scott said in a statement. “Their commitment to our team shows the growth we continue to experience as a company. The Eagles focus on giving back to others in communities, and that’s something we support as a team. Fraternal Order of Eagles has enjoyed their relationship with Justin, and I know they are very excited to continue their association.”

Allgaier, who drove for Turner Scott Motorsports in the Xfinity Series with the F.O.E. serving as a team sponsor, is very happy to see the expanded role.

“I’m glad to partner with the Fraternal Order of Eagles at HScott Motorsports,” Allgaier said. “I’ve enjoyed working with them and they’ve been a big supporter of racing. They’re a great organization with involvement in local communities, and I’m happy to be associated with them on and off of the track.”

The F.O.E. have already served as a co-primary sponsor (along with Switch Hitch) on the No. 51 this season at Martinsville back in March. In that race, Allgaier ran well before crashing out and finishing 42nd. Previous to this season, the F.O.E. focused their NASCAR sponsorship in the Xfinity Series, where they first got involved by sponsoring Braun Racing in 2005 after Shane Hmiel flunked his second drug test and was suspended indefinitely from NASCAR, costing the team their sponsorship from WinFuel. The F.O.E. stuck with the organizations through various ownership changes and mergers over the years. After Turner Scott Motorsports was effectively shuttered at the end of 2014, the F.O.E. moved their support of the team to Sprint Cup.