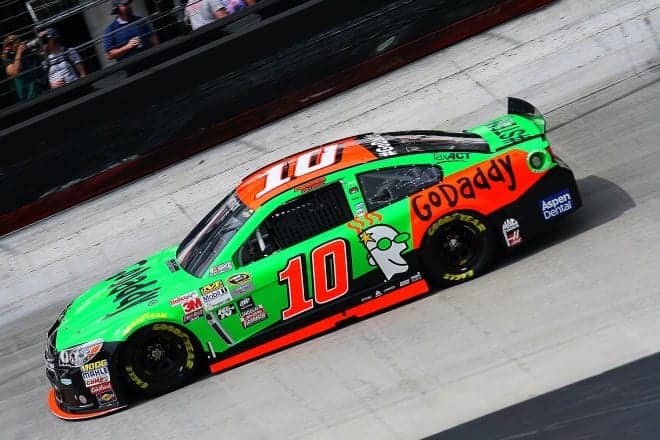 Danica Patrick is in the market for a new primary sponsor next season after current primary sponsor GoDaddy’s intentions of leaving the sport were announced in USA Today.

Patrick, who races the No. 10 Chevrolet for Stewart-Haas Racing, is in a contract year. Speculation was that she needed to pick up her performance in order to keep GoDaddy around, which makes the announcement all the more surprising.

Patrick is currently 16th in Sprint Cup points, easily her best start to the season, and owns two top-10 finishes. Her ninth-place finish at Bristol a few weeks ago made her the record holder for most top 10s by a female driver in Sprint Cup history, with six career finishes in the top quarter of the field.

Patrick, after the announcement, called GoDaddy an “incredible partner” and hopes to continue a relationship with the company. GoDaddy announced they were looking to keep Patrick associated with the company through a personal services contract.

“We love Danica and all she does to empower and inspire people, especially women, which is why we are working to keep her in the GoDaddy family,” GoDaddy chief marketing officer Phil Bienert said.

“We have the utmost respect for Stewart-Haas Racing, and they’ve been phenomenal partners,” Beinert continued. The reason to drop the sponsorship was made in order to “reach a more globally-diverse set of customers.”

Patrick is also sponsored by Aspen Dental and TaxACT, but GoDaddy sponsored the majority of the schedule.

Why not get her in the Chase on the way out. Now that Harvick and Bush are in the Show, give her Rodney Childers and crew and once she’s in let Stewart use them. Same with Knaus, let the other drivers use him to get in the Chase. I am most impressed with Childers lately. Look back at the success he had at MWR with different drivers. He is the real deal and paired with even an average driver will get wins. It is in the best interest of the teams to get as many of their drivers into the Show as possible so why isn’t this happening? I predict they will.

LOL. I wish I could bet you a C-note on that one.
Teams don’t break up winning driver/crew chief combinations when they are working. I guess you don’t believe in the intangible chemistry factor or the fact that it takes time to build communication and understanding between the pair. You can’t take any winning crew chief and pair them up with any driver and guarantee the results will be the same. If you think it was that easy then everyone would be doing that.

I better keep my C-note but why not try it with this ridiculous win and in format? I do believe in the intangible chemistry factor you mention but there are exceptions to that wih exceptional people. Don’t forget the 5 wins Childers got in his first season with Harvick, the first of which was the their second points race together at Phoenix (I had to look that up). Others have also had immediate success. SHR has already traded an entire pit crew to help the organization win a championship so is it really that far fetched? Probably, but with this format there is nothing to lose and a bunch to gain.

Danica bought the ride with the sponsorship money she brought to the team. Now it’s probably mostly gone and the team will look for replacement money/driver. GoDaddy looked at ROI and said good-bye to NASCAR. Danica will get the ride she deserves unless she finds another sugar “daddy.” Maybe she can spend time at race tracks with Ricky.

Those who in any way see this as good news for the “sport” are letting their dislike for Danica get in the way. There are very few full time sponsorship in Nascar anymore. To lose another is not a sign of robust health. Companies come in because they expect to make more money than they are spending. They leave because they can do better elsewhere or perhaps to cut their losses. Obviously GoDaddy thinks that they have tapped out the potential for growth with Nascar. So they will take their money and invest it elsewhere. Good luck to them.
And for those who think that now some young deserving driver will get the ride, thats hilarious, where’s the money going to come from? Some company no body ever heard of? Or perhaps 32 companies that nobody ever heard of.
Not good news folks.

I was going to point out that if maybe Danica hadn’t sucked as a driver, won a couple of races and maybe made the chase once, that Go Daddy may have been able to justify staying around (usually they calculate the amount of tv time they get during a race and divide that by the dollar amount per minute of the cost of buying commercial time to determine if the $20,000,000 cost vs benefit is worth it) however, then I realized that this could happen to anyone and does all the time. There isn’t a driver out there that hasn’t lost a big name sponsor (well maybe Johnson and Lowes are an exception) so really, this is just business as usual. And yes, $20,000,000 sponsors are hard to come by, but somehow there are more fully funded competitive teams than there ever have been. Most likely though, it involves piecing together several companies each taking a handful of races as primary sponsor to fund a team.

FYI – I also saw in another article that Go Daddy stock recently went public which changes the spending habits and budgets within a company. They now have a board of directors and stock holders to answer to and have to be able to produce earnings and dividends. So that might be a big reason why they are leaving.

I’ve thought that for quite some time now that in terms of the amount of exposure per dollar spent NASCAR is not a wise advertising investment. That is probably why Go Daddy is getting out. Love her or hate her Danica is one of the most marketable of NASCAR drivers. I’m guessing that as long as there are companies with more dollars than sense willing to throw money into the black hole that is NASCAR Danica will be as likely to draw sponsors as the top performing drivers. Maybe more so.

Why not make Go Daddy the official domain registry of NASCAR