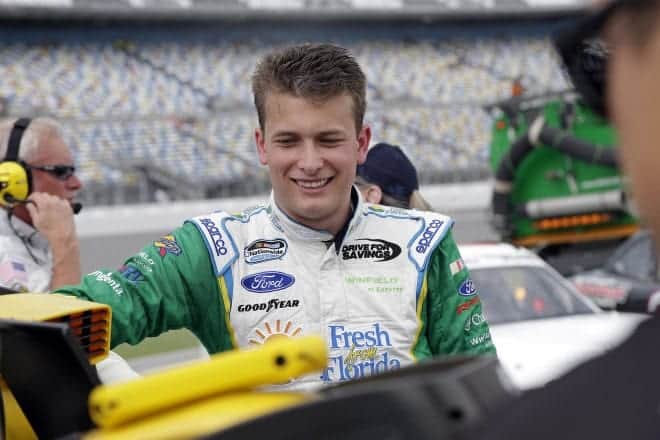 Every weekend, Dakoda Armstrong straps on his helmet and steps into his green, white and black No. 43 Ford for Richard Petty Motorsports. Geared up to race for NASCAR’s all-time wins leader, Richard Petty, the young man understands that each week is a hefty learning experienced in the sport’s second-tier division.

Signing with Richard Petty Motorsports prior to the 2014 season, the Indiana native has four top 15s in 41 starts thus far into his stint with the team. As such, his performance has not gone as planned, and frustration has grown throughout the team. However, 2015 has marked a new beginning for an organization that is attempting to ascend to the top.

Moving to a new shop over the off-season, the team has its sights set on a new future. Besides signing Sam Hornish Jr. to race the team’s second car in the NASCAR Sprint Cup Series, it also re-signed Armstrong, which shows the faith the team has in its young driver.

“I think our mile-and-a-half [program] has been a lot better from last year,” Armstrong told Frontstretch. “There are still a lot of things we need to work on, but it has been going in the right direction and I have been pretty happy with it. We have had some problems on the short tracks. Somehow, we went the wrong way there. We have struggled as an organization to get that better. I think we are on the upturn; we just have to keep working on it. We still have a lot of work to do and there is a long way to go.”

The learning curve has been immense for him. Last year, he had an average finish of 20.2, which was a decrease from his predecessor, Michael Annett, who had an average result of 19.3 in 58 starts with RPM. But following his struggles during his rookie year, along with a few weak events to begin the 2015 season, the 23-year-old is prepared to start making the climb to the top.

This season, he is working with Frank Kerr, who is best known as Marcos Ambrose‘s crew chief when JTG Daugherty Racing made the jump to the Cup Series several years ago. Compared to working with former crew chief Philippe Lopez, who is now the operations manager within the organization, Armstrong believes Kerr has some keys to turn the team around. With an open-wheel background, Kerr provides insight from other forms of racing, along with a pair of wins in the Xfinity Series with Ambrose.

“There are still a lot of things we need to work on communication-wise,” Armstrong explained. “We are still a little too nice to each other. If you look at any crew chief and driver, they can tell it like it is and not get offended by it. If he thinks I am doing something wrong, he needs to tell me and if I think he’s doing something wrong, I have to be able to tell him. We’re early into the season, but so far things have been going well.”

As the tandem continues to learn how one another operates on a race weekend, they understand that things are far from perfect. Armstrong has just one top 15 this year, which came at Daytona. Besides finishing 16th at Texas, he has failed to finish on the lead lap eight races into the season. The struggles have moved from the intermediate circuits to the short tracks this year. With issues turning the car in the center of the corner at tracks such as Bristol and Richmond, his team has fallen behind early and gets put into a hole that it cannot recover from.

“With the short-track stuff, we just haven’t been able to turn in the corners as well as we need to,” he said. “We haven’t found anything that can fix it for us. We have to keep working on it and see the chassis stuff to see if our tire data is right. We need to fix our free-in. We had that problem all last year, and it is still there a little bit. We have to keep working on that and still allowing the car to turn well. It’s a tough problem to fix, but we have to keep going.

“It takes so long in this sport to change things, and it doesn’t happen overnight. It’s a slow process and I know people don’t want to hear that, but we need to get top 15s every single week and then top 10s. I feel like if you are at that point, you are good enough to win races. We just need to get more consistent. We need to figure out what else our chassis’ and bodies need.”

A large reason as to why the No. 43 team is struggling this year is rather simple. Since the team opened the doors to its full-time Xfinity Series program in 2012, it has had an alliance with Roush Fenway Racing. However, as RPM looks toward the future, it understands that parts and pieces need to be built in-house to get optimum performances out of equipment.

Biagi-DenBeste Racing has partnered with RPM in the Xfinity Series, basically renting Aric Almirola and Hornish. The pair are scheduled to race in just over 10 events each, but will have little help from their Cup Series team. Biagi runs different equipment compared to RPM, yet Armstrong’s crew has been leaning on the No. 98 team as a way to increase potential within both cars.

“They are always doing a little bit different things, but we always share notes and stuff with what they’re doing,” he said. “They are running different cars from what we have. You don’t want to compare apples to oranges sometimes. This past week, we did give them one of our cars from our shop, so we know what we need to improve on. We need to try to keep doing that and they are really good drivers, and I think they can really help our program. With them running and trying to diagnose problems on what is going on, even with another team, still helps us since they run Fords as well.”

Even with the struggles within RPM, Armstrong has found a place that he can call home after bouncing around from Richard Childress Racing, ThorSport Racing and Turn One Racing early in his career.

WinField, an agricultural company, has backed him since 2013, and has continued to extend its relationship with a driver whose family owns a farm.  Last year, the company sponsored 28 of the 33 Xfinity Series race, but that number decreased to 23 due to the rising costs of sponsorship at RPM. Since the team is now running its own cars instead of getting them from Roush, costs have gone up.

“They have put a lot forward and it has helped us a lot,” Armstrong said. “The one thing with going out on our own has made things more expensive for us, and we need more funding per race. It is always hard to tell a sponsor that you need more funding, but it is what makes the cars go fast. We are still racing on a budget. Things have been tough, but WinField has been awesome as far as stepping up to do nearly the full season.

“We have been bringing on some new partners like Purina at Texas, so as long as we can keep doing that – we are pretty lucky to have a sponsor in NASCAR. I feel like the future is pretty good with them now that they have their feet wet over the past couple of years. We need to keep running better for them and keep showing it is a good place and keep making their business grow, and we do a good job at that.”

As those new partners join the team, Armstrong hopes his results will begin to increase. Eventually, he would like to step behind the wheel of a Cup Series car. However, that day is still long to come. The focus at the moment is to make him better as a driver, and start to run inside the top 10 on a consistent basis.

Signing year-to-year deals in the past, he is looking to lock up a solid future with the team. He cannot rest too easy, especially with developmental drivers Ryan Truex and Corey LaJoie still signed with the team, even though they have seldom raced for the organization. But he believes RPM will be home once again in 2016 as long as his sponsor stays with him.

“I haven’t been as competitive as I like,” he explained. “This sport is super competitive, so if you are not running up front, you lose a little bit of competitiveness and how to run up there. When you get to the Cup Series, you really need to be ready because it becomes more competitive, times are a lot closer and the cars are more equal. We just need to focus on running up front more consistently before we are ready for Cup.”

Moving forward, the No. 43 team believes it can start racing for top 10s as the year continues. Not having the funding to go to the wind tunnel has certainly hurt its performance, according to Armstrong. However, the Ford Performance Center in Concord, N.C., is beginning to help teams within the blue oval, and things are slowly coming together for the manufacturer.

“It has hurt us a little bit to begin the season, but it has also helped us now that we aren’t restricted. It used to be they would hand us a car and say, ‘here you go’ and that’s what we ran. Now if we think something is wrong, we can change it. I think in the long term, once we are going to get everything figured out, we are going to be better off and consistently outrunning them, hopefully.”