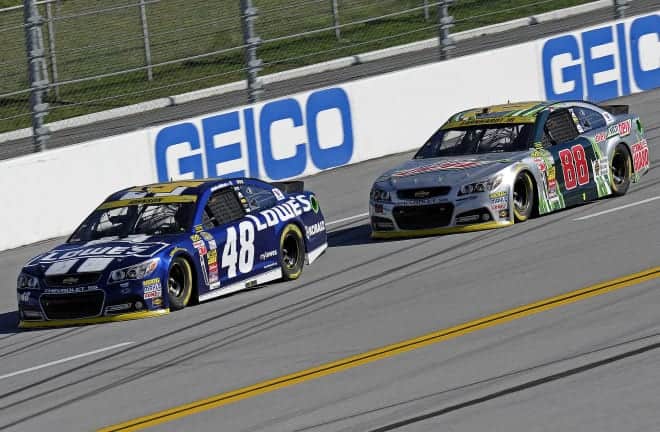 Here we go to one of the few holy ground left in a modern NASCAR world that is light on tradition. Full novels could be written about what it is like to drive a stock car around the Talladega Superspeedway at 200-plus mph. Ask Rusty, or Cale or Carl. This place strikes fear in all those who dare test the limits of its high banks. It was like that in 1969, when the track was first built, and it remains that way today.

Whomever masters the behemoth that is Talladega will walk out with a likely playoff berth in hand… as well as a migraine. It is unquestionably the most stressful and perhaps most dangerous track on the circuit, and the stars and cars of NASCAR’s premier series will attack it on Sunday at full force.

Read on to see just what NASCAR’s wildest facility has in store for this Sunday afternoon.

1. Will handling continue to have an impact?

The Gen-6 era has completely changed the way the game is played on restrictor-plate tracks since the new car model was introduced back in 2013. With the Gen-5, restrictor-plate racing was something of a crapshoot, as a combination of extremely drafty COT cars and various forms of tandem racing introduced an incredibly high level of variance to the racing at NASCAR’s biggest, baddest and most unpredictable racetrack. Old-school drafting skills were out the window in favor of push-drafting ability, cooperation with teammates and raw nerve. Handling was never an issue at Talladega in this era.

But with the Gen-6, that kind of crapshoot-y plate racing is largely a thing of the past. Drafting is now back to its old school form, and the low downforce, difficult-to-drive Gen-6 superspeedway aero package has put the racing back into the hands of drivers. With each passing Gen-6 plate race, handling has become more and more important. In fact, at Daytona this year, some drivers were actually having to lift going into the corners due to how poorly their cars were handling.

Look for handling to be a major factor once again on Sunday, as Talladega’s 9-year-old surface will be baking in 80-degree sunny weather. This means that the drivers whose cars handle the best will be the ones who can stay at the front on Sunday. Of those who have the best handle on their cars, it will then become a battle of raw drafting skills of a very tactical and difficult-to-master variety, the style of which was most famously seen in the late ’90s and early 2000s.

It will be an old-school plate race with the top drivers and teams up front for most of the show, much like this year’s Daytona 500 was, and for those new to the sport, that is likely something that they are not used to seeing at Talladega.

2. Is this the race where David Ragan finally cashes in?

Recent history has demonstrated that David Ragan is unquestionably one of the elite superspeedway racers in the Sprint Cup Series garage. Ragan has shown that he can win superspeedway races under just about any drafting style and in just about any series. The man simply has a knack for this style of racing in the same way that AJ Allmendinger excels at road course racing. You know, the whole horses for courses thing.

Ragan has done a lot with little over the past three years on superspeedway tracks in equipment that is/was incredibly subpar. Contrary to popular belief, equipment is still a major factor for success at these kinds of tracks, especially in a Gen-6 era where handling is so important. Despite this fact, Ragan has still managed to score a win and numerous top-10 finishes on superspeedways in his time at underfunded Front Row Motorsports, a feat that stands as incredibly impressive.

Ragan enters this weekend with the best superspeedway equipment he he’s ever had the pleasure of piloting with his Joe Gibbs Racing No. 18 car. Given that this is his last ride in the car before moving to the No. 55 Michael Waltrip Racing car, you can be sure that Ragan will be doing all he can on Sunday to get the most out of his last race in one of the best cars on the circuit.

And by the way, if Ragan happens to win the race, it would be cause a seismic shake up to the Chase picture, as a win by him could potentially mean that the No. 18 car would be locked into the owners’ Chase despite the fact that whomever is driving that car after Talladega might not be in the drivers’ Chase. As such, Ragan’s performance on Sunday will undoubtedly be drawing a great deal of attention.

3. Will Jimmie Johnson finally deliver a complete race at Talladega?

Statistically-speaking, Jimmie Johnson should have won three out of the last four races at Talladega. Johnson led the most laps at the previous two fall races at Talladega and undoubtedly had the best car in each of those events. At the 2013 spring race, Johnson ran second to Matt Kenseth for the duration of the race, and courtesy of some tweaks from crew chief Chad Knaus probably had the best car at the end of the race.

So what happened in all of these events that caused Johnson to lose? Bad late-race drafting decisions and poorly timed blocks. Superspeedway racing is a mental game just as much as it is a test of driving talent, and as much as Johnson was able to outclass the field for the lion’s share of all of these races, he was outsmarted and out-muscled in the last 5% of the race by other drivers in the field.

Based on his sterling performance in Speedweeks earlier this year at Talladega’s sister track, Daytona, it looks like Johnson will be strong once again this coming Sunday. In fact, I’m willing to bet he will be the dominant car for most of the race and is likely the favorite to win the whole thing. But if he doesn’t shore up his late-race superspeedway prodcution, all of his mid-race strength will be for naught.

4. Will more drivers be burned by the “hang back” strategy?

As the drivers and teams have continued to learn more about Gen-6 superspeedway racing, they have learned what strategies work and which ones don’t. I have been an outspoken critic of the oft-employed “hang-back” strategy of superspeedway racing, where certain drivers form a single-file group behind the main pack in hopes that a field-clearing wreck will take out the competitive cars in the race, thus allowing the sandbaggers to steal a good finish despite refusing to race for most of the event.

Not only is this strategy a slap in the face to fans, it almost never works (and deservedly so). Only one driver in recent memory has successfully employed this strategy to get a win: Dale Jarrett in the 2005 fall Talladega race. And the only reason his strategy worked that day was because three major wrecks essentially cut the field down to about 12 truly competitive cars left at the end of that race.

It is especially idiotic for teams to employ this strategy in the Gen-6 era, because track position is very important with the Gen-6 superspeedway aero package. If you don’t consistently fight to move forward and keep your track position in this aero package all race long, you will either lose the draft or be stuck mid-pack at the end of the race.

Despite that, I am quite positive that a few teams who refuse to learn from past history will try to make this strategy work. Feel free to laugh when you watch the strategy fail on Sunday.

I am sorry, I am kinda sick of the David Ragan bandwagon with plate races. He has exactly two wins. 8 years of a full season and 2 additional years of not a full season. 10 years. The promotion of this guy getting a second wind because of the sub issues is misleading. Had 10 years of solid backing and nothing of value to show for it. Interesting the spin the media puts on the obvious. And I have no issue with Ragan…Ragan who? And if he gets the checkers this weekend he is 1 win away from tying Mikey’s 4 win total at plate tracks..yawn.

The product is pretty unexciting and they’ve got to write about something I suppose. Hey did you hear, Kyle Larson is going to win this week. Oh, wait that was last year.

hehehehehe, good thing I didn’t hold my breath…they said it was his destiny to win quickly!!!!

Not to worry, plate races are random chance anyway. Like Dennis, I don’t think this version of the COT is all that great – at any track – let alone Dega.

They’ll start pushing Chase Elliott on us next because apparently the Dillon brothers aren’t living up to whatever expectation NASCAR has for them. NASCAR’s gotta bang the drum about some hot new driver in the hopes that people who are fans of the drivers who are retiring soon or are just plain bored with the drivers who are in the series now will suddenly decide they can’t live another minute w/o buying their souvenirs because they are the next big thing.

I have found it more than a little amusing that after the announcement of GoDaddy leaving the series there have been articles about the number of twitter followers she has. What in the heck does that have to do with driving a race car? And then they compared it by saying that Dale Jr doesn’t have that many followers — LOL right. So are they saying Danica is more popular than Jr? Based on my totally unscientific survey of fans at the tracks, I sincerely doubt that.

Gina, if you are in business to sell widgets you may prefer the driver with the best exposure to the best driver. Danica, like Jr., will have no trouble with sponsorship.

Have to agree with kb. David is a competent driver but he had his chance. There is new talent coming into NASCAR and that is the future. Mr. Ragan will be back to sub-par equipment soon enough.

Now, regarding the “slap in the face” comment. Disagree. The “slap in the face” if there is NASCAR running the Daytona and Talladega races as pack races. It’s dangerous and not racing. If this is what the fans want to see then they have nothing to complain about when drivers do what’s best for them. Drivers owe the fans absolutely nothing. If the fans don’t like what they see they can stay home. Myself, I hate the current package they are racing with. Little passing. People stuck in line with no where to go. Where is the excitement? At least with the tandem racing they could be masters of their destiny.

When pack racing has a good package to work with it can work very well. But, we haven’t seen that in many, many years.